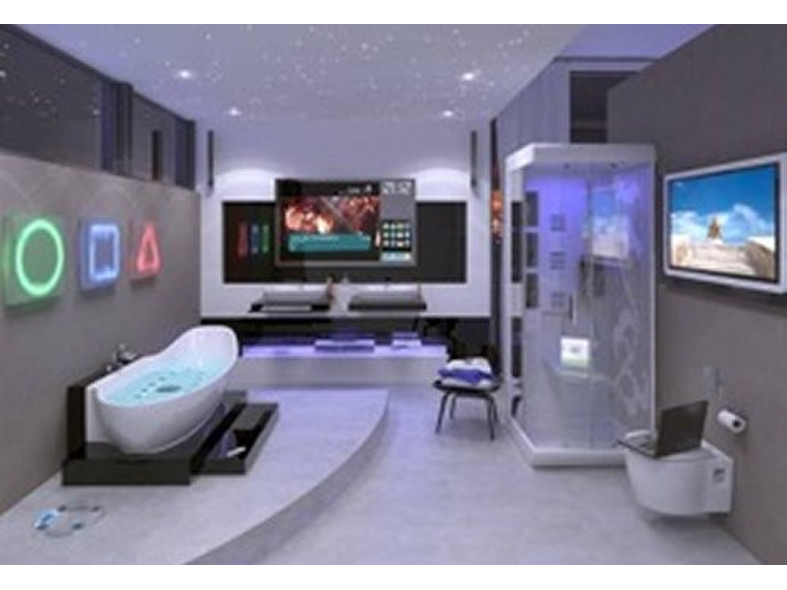 According to new research released today, increasing numbers of consumers across the globe are using digital products in their bathroom - from wireless devices and portable music players to computers and even accessing the internet. The study of more than 5,000 consumers in fourteen countries reveals that UK teenagers are some of the most technologically savvy, with 79% of those surveyed agreeing they would spend more time in a digitally enhanced bathroom – the highest figure from all countries.

The research commissioned by Ideal Standard International, a leading provider of innovative and design-driven bathroom solutions, also reveals that one in ten UK teenagers is already using the internet as well as gadgets such as electric game consoles in their bathrooms at least once a week. Younger Brits (15-20 years old) are using other digital devices such as mobile phones and portable music players in the bathroom significantly more often compared to older age groups. According to the online poll, British men are living up to their gadget loving stereotype and make more use of electronic products in the bathroom than women with almost a quarter (37%) using radio, TV, computer and internet all from the sanctuary of their bathroom. In contrast, one out of three British women surveyed are more interested in buying digital products that help to be environmentally friendly, such as taps with special ‘clickCLICK technology. The single lever basin mixer and bidet mixer incorporate a CLICK feature that encourages water saving – the user lifts the handle until they feel a slight resistance. This resistance informs the user that the fitting is delivering only 50% of its maximum flow potential. Lifting the handle further enables the fitting to deliver maximum flow. CLICK technology is available on Idyll Two, Ceramix, Ceraplan and Melange.' technology that control water flow and reduce water wastage. This image depicts existing and futuristic digital aspects of the bathroom. Included are: mirror/screen with digital time display, mirrors with integrated lighting system, digitized power shower and hammam with MP3 connection incorporated, digital sensory taps, but also more regular features such as a wireless landline, personalized weight scales, PC and television set. Key findings include: 1. Gender: Overall, women almost use digital products as often as men but for different reasons. For men, the digital items used in the bathroom are more often linked to entertainment and time saving, such as PDAs, computer games, DVD players and the internet. Women use telephones, personal weight scales and portable music players most often. When it comes to watching TV in the bathroom, men (11%) and women (3%) have very different scores! 2. Motivation: The number one reason why people would use digital products in the bathroom is "to be entertained" (30% in the UK). Mostly used for entertainment are TVs, radios, DVDs and CD players, portable music players and electronic game consoles. The main reasons why people use their mobile or wireless landline phone in the bathroom are: to save time (46%), to be more available (29%) and to have more privacy (29%). 3. Age: 43% of British people in their twenties are most drawn to electronics for entertainment . Moreover, 40% of families with teenage children say they are more inclined to buy digital products for the bathroom. 4. Device: TVs are most popular in South Korea, where 30% of consumers already have one in their bathrooms compared with only 6% in the UK. Looking at the use of mobile phones in the bathroom, South Korea leads by 65% closely followed by Russia (60%) and Greece (56%) with the UK lagging behind at 26%, although this is on the increase. The radio is also popular with one in four people in the UK already having the device in their bathroom. 5. Potential: Six out of ten UK consumers indicate that they would spend more time in the bathroom if they had more digital products – especially if they were products designed for entertainment (32%), wellness (24%) and communicating (14%). Overall, eight in ten British consumers are interested in buying one or more types of digital products developed for the bathroom. The next-generation bathroom Ideal Standard International has long been an advocate of forward-looking design and the company's vision is to "bring the digital age into the bathroom creating a life space of pleasure and relaxation". Ideal