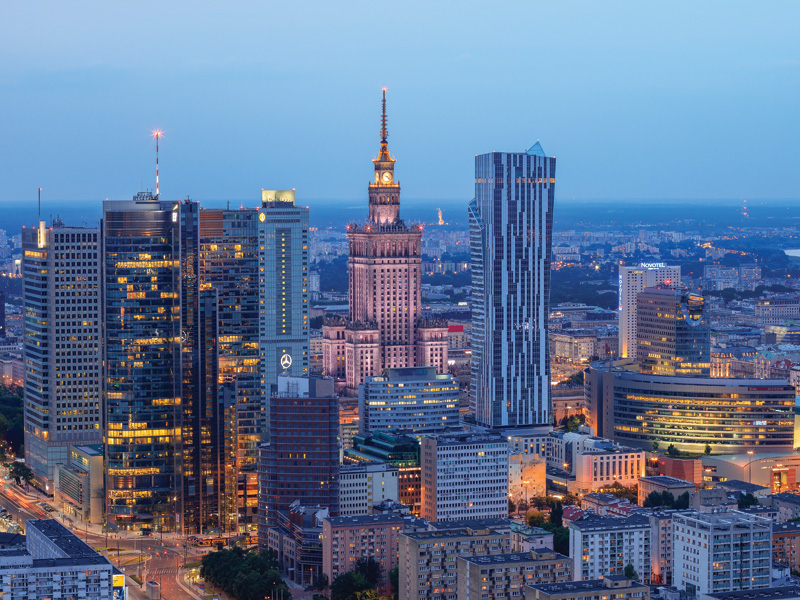 A new luxury residential tower has become a dramatic addition to the skyline of Warsaw, but for both architect Daniel Libeskind and interior designer Woods Bagot, Poland’s past lies beneath the surface of its design

Daniel Libeskind has family roots near where Stalin thrust the Palace of Culture into the heart of war-wrecked Warsaw. The stolid yet exquisite 231m-high ‘socialist-realist’-style tower designed by Lev Rudnev was completed in 1955.

‘I remember standing in front of this massive Stalin propaganda building,’ says Libeskind. ‘When you look back at the pictures, you’re a tiny fly standing in front of a gigantic monster.’ In the Seventies, a few low-glamour skyscrapers began to rise nearby. But now, as if in a face-off, the Zlota 44 ascends directly opposite Rudnev’s behemoth, challenging it for attention. It is bright and fluid, like something frozen in motion — everything Stalin’s iconic ‘gift’ to Poland is not. Libeskind calls it ‘a gesture of freedom, a gesture of flight, something positive, into the sky’. The tower rises from a podium volume. The eastern facade presents a vast, concave, torqued surface An original sketch by Libeskind explored the form that would emerge

The tower takes its name from its address on a sidestreet named Zlota, meaning gold, in what had been the Jewish district, and the tragic ghetto under the Nazis. Engineered by Arup, the concrete-frame building is far from a conventional vertically extruded form. Rather, dramatic facades give Zlota 44 a unique look, distinctly deconstructivist in style and on a scale that is visible across the city. Its western facade rises straight up, but the other facades are characterised by vast leaf-like surfaces with curving edges, as if wrapping around the tower like an angular cloak. Looking up from the entrance on Zlota Street, a deconstructivist play of surfaces is evident

These surfaces are three dimensional and, as Libeskind says, ‘not an appliqué to the facade. The entire building is actually sculpted and torqued, in a way that is also cantilevered off the base.' The sweep of the eastern facade, which faces the Palace of Culture across the wide Emilia Plater Street, is full-width. It rises to a sharp corner at the full 192m height — ‘there was a limit of how high it could be,’ comments Libeskind. ‘I always argued that it could be taller.’ Curved, sliced and angled surfaces wrap the tower like a cloak

Right from his initial sketches, Libeskind was referencing the eagle, the Polish national symbol, although he admits that ‘some people call it a sail’. Because the curvature is concave, drawing the building in at mid-height, it also helps provide the right-to-light of the lower buildings around it — Libeskind comments that ‘you have to shape and carve in a way that permits the low buildings… sunlight’. It’s a far more graceful solution to that issue than at the Intercontinental Hotel just two blocks away, where architect Tadeusz Spychala actually sliced a 16-storey, wedge-shaped void into his otherwise conventional tower, built in 2003.

The tower rises from a nine-storey podium volume, and here too are elements of Libeskind’s distinctive deconstructivism. The entrance on the south side of the block is recessed beneath the curtain wall, whose overhang is slanted from the horizontal. The curving tower facade plunges down from above to superimpose itself on the podium, ending in a sharp edge and slightly cantilevered out from it. Both tower and podium are clad with 3,500 panels of aluminium and triple-glazed glass, coated to reduce solar gain and noise-proofed — a first in Poland. Interior decor is by Woods Bagot, the global architecture practice that started in Australia, but Libeskind himself designed the entrance lobby. Wide, curving strata of wood line its walls, subverting the rectangularity of the space and giving it warmth.

A restaurant shares the ground floor, and there is multilevel parking within the podium. The eighth floor has 1,400 sq m of amenities for residents. It includes a cinema room and two conference rooms, sauna, gym, spa and a 25m-long swimming pool, Poland’s largest private indoor one — Libeskind enthuses that it’s ‘bigger that anything in New York City’. He says that ‘you have to think of all the things that can happen when you live in a high-rise building. It was (15th-century humanist architect Leon Battista) Alberti who said a house should be like a little city, and a city is like a big house.' Out on the amenities floor’s sky terrace, facing the Palace of Culture, birds get houses too — beside the sunloungers on the wooden decking, there are two bird-feeder boxes mounted on high posts. Furnishings were chosen ‘to give a nod to the city Warsaw would have become’. Photograph: Will Pryce

Above all this are Zlota 44’s apartments. The facades shape a different floorplate for every level, and its 251 apartments have different shapes too. Libeskind says that it’s ‘not just for the market, for me that’s to assert individualism… it’s a tower that speaks to freedom of choice’. The dwellings range from 62 sq m to 620 sq m, with up to four bedrooms, cinema and cigar room.

The Woods Bagot approach to the interior decor was mindful of Libeskind’s internal spaces. Principal Jonathan Clarke explains: ‘Exposed columns and ceilings ensured we were honest and truthful — the interiors were less about covering or enveloping the architecture, and more about working in harmony with it.’ That exposed concrete gives a hint of loft to the apartments, and there is a subtly eclectic touch to the mix of furnishings, lamps and artworks, which range from dark sculptures to colourful abstract canvases. Carrara marble and Black Aziza marble are deployed in the bathrooms. Photograph: Will Pryce

Overall, colours are muted — white, oak and chestnut brown and black dominate. American walnut flooring underlines the luxury feel, especially, according to Clarke, when ‘paired with the faded brass fixtures and antique furnishings — such as the Thirties’ drinks trolley’. Bathrooms deploy Carrara and Black Aziza marble. Despite a definite freshness to the decor, Clarke says that ‘the aesthetic driver was capturing the lost history and forgotten heritage of early-20th-century Warsaw… We wanted to marry (that) with the modernity of a 21st-century city’. Referencing the near-complete destruction of the city in the war, Clarke says that ‘Zlota 44 became a nod to the city Warsaw would have and should have become’.

He cites two Woods Bagot projects that offered guidance — Melbourne’s Garden House (2011) and London’s Embassy Gardens, Nine Elms (2015) — ‘they both speak to a lost era and capture an honest luxury’. With the latter, ‘we really honed down on what we now call “The Choreography of Selling”… where we learned how to talk to and capture the imagination of the end-user through the marketing and sales experience’.

Initially that experience required potential buyers to don PPE (hi-vis jacket, safety helmet et cetera) to ride up to Zlota 44’s penthouse level, which had a variety of one-to-three bedroom offers on show. ‘It’s rare to situate the marketing suites and sales rooms in [a] development itself, amid a live worksite,’ comments Clarke. Now, the lifts and their lobbies are black glass and the top level is a big, private-function space. Almost like a suggestion of steampunk, it includes an antique telescope placed directly opposite the clocktower of the Palace of Culture. Every apartment is different in floorplan and each has an astounding view. The 176m-high Warsaw Trade Tower is visible in this view. Photograph: Will Pryce

Nearby, construction is underway on the Foster-designed 310m-high Varso Tower, containing offices. In the meantime, Zlota 44 is Warsaw’s second-tallest tower, and 32m taller than its competitor in the downtown upmarket residential sector, the Helmut Jahn-designed featureless slab called Cosmopolitan Twarda 2/4. Libeskind is vocal about the way towers bring life back to the city centre in a sustainable way, but admits that exclusive luxury towers are not the whole answer. ‘Right now,’ he says, ‘the trend is set by the market, but surely it’s only a beginning. We need beautiful, tall, dense cities also for people that will be affordable to live in.’

He acknowledges the mistakes of Corbusian social housing — ‘I think people have learned that packing people in in a very abstract way is to destroy community. Corbusier invented a kind of social idea; it was not really a good idea because he took the street away from the street and put it up high... There’s nothing to say [you] cannot build high-rise, affordable housing that is elegant.’

Hopefully, such housing may one day rise with the elegance of Zlota 44.