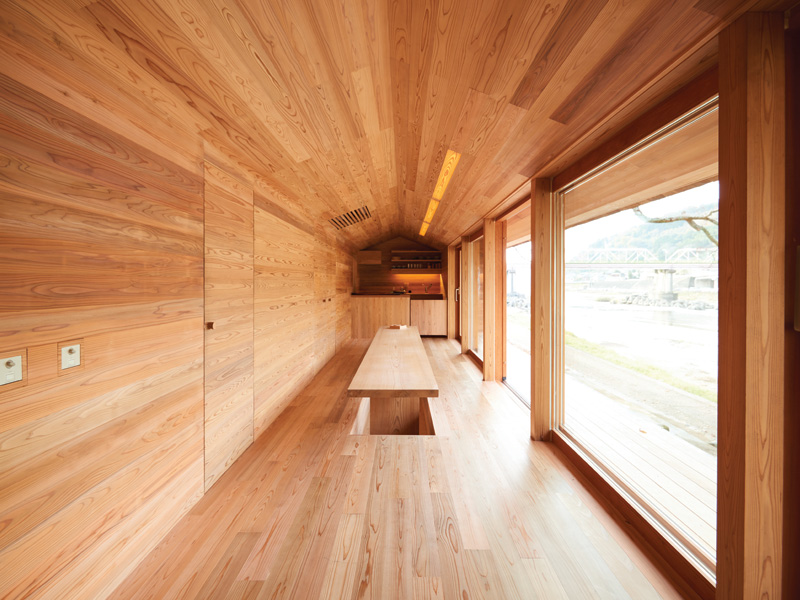 All images courtesy of Airbnb, except where otherwise stated.

An Englishman, a Scotsman and a Welshman sit down to dinner…

There’s also a raft of local people from the surrounding small rural town in Japan, as well as two Americans, one of whom is a billionaire. The cooking is being done at the table and the atmosphere is convivial and relaxed.

The host of the event, well, that’s a little bit more complicated… The community of the town of Yoshino, some 90 minutes from Osaka, owns the building we’re in (I’m the Welshman). That makes them the hosts, right? Well, actually we’re staying in the building — an Airbnb — so technically we’re hosting them. Luckily, they’re still doing the cooking, though. The occasion is the first communal feast being held in the Yoshino Cedar House, a building built by Airbnb — initially for an event in Tokyo — and then given to the people of Yoshino as a community building-cum-guest house. All the proceeds from people staying here go to the community itself. Yoshino is the centre of cedar wood production in Japan in a tradition that goes back through eight generations. Image Credit: Ryan Kim

The billionaire at the table is Joe Gebbia, one of the three founders of Airbnb, and this project is very much his baby, along with Samara, a multidisciplinary innovation and design studio within Airbnb, launched last year to explore new areas of the Airbnb community and ‘build’ things like the Yoshino Cedar House.

The building itself is a long (22m), thin (3m), barn-like structure over two floors. The ground floor is dominated by a beautiful 4.5m-long, low table, made from a single piece of cedar, surrounded by seating sunk into the floor. There’s also a staircase that descends into the space from above, but doesn’t touch the ground floor, more on the reason for this in a minute. Upstairs are two separate bedroom spaces at either end of the building. These too are seen as communal (for the guests at least) and are advertised on the Airbnb website as sleeping up to seven people. Yoshino is the centre of production of cedar wood in Japan; it still has around 40 mills. This building has made full use of the local material and looks out on to the river to a place where timber being floated down the river used to be stopped and checked for quality. The ground floor is almost entirely made out of cedar: floors, walls, ceiling and said table. Upstairs it changes to another local wood, cypress, the staircase is also cypress and so, to differentiate, it reaches down to the ground floor but doesn’t meet it — a very delicate touch, very minimal and considered, very Japanese. The whole project came about as a result of a meeting between Gebbia, who is himself a graduate from the Rhode Island School of Design, and Kenya Hara, graphic designer, curator and founder of the design think-tank the Hara Design Institute. Hara was in the process of setting up the House Vision exhibition, which brought together big-name architects, such as Shigeru Ban, Sou Fujimoto, Kengo Kuma and Atelier Bow-Wow, with big companies to explore new types of housing and ways of living. Hara teamed Airbnb with Tokyo architect Go Hasegawa, and you can read a lot more about the creative process in the following interview with Joe Gebbia. After the Tokyo exhibition, the house was loaded on to trucks and brought to Yoshino, a community that like many in Japan has fallen on harder times and seen its young people moving away to the big cities. It is famed for its blossom trees that turn the mountains pink in the spring and attract thousands of visitors, but after that the town turns very quiet again. This is a truly interesting experiment. Traditionally, homes in Japan are highly private places and it takes a very long relationship to be invited to someone’s home. So the basic Airbnb model is already somewhat stymied. But that doesn’t mean this is all about marketing, with a little bit of vanity project thrown in. When you are sitting down with the community to eat, seeing people drop in who are passing by and spending further periods with the people of Yoshino, you are treated to a very different, actually much more intimate, way of experiencing a place. This was always meant to be an experiment to explore the host/guest relationship in Japan, so was always very much on-brand for Airbnb and done in a fairly high-profile way. But talking to Gebbia you quickly realise that he has invested quite a lot personally in this project and that its life after Tokyo, and particularly its role in giving something to a struggling community, was also a key component here. It’s not a blueprint for further building but, as Gebbia says, more of a catalyst to show how thinking differently can make a difference. It’s also very much about Japan. You cannot see this happening or working in, say, a British community, where you can’t help but feel the lack of social cohesion and community spirit would see this building being stripped bare, graffitied and generally abused. But here in a rural Japanese community it makes a whole lot more sense. As Gebbia concludes: ‘The intention is really to help these people and this place… for us this has been pretty special.’