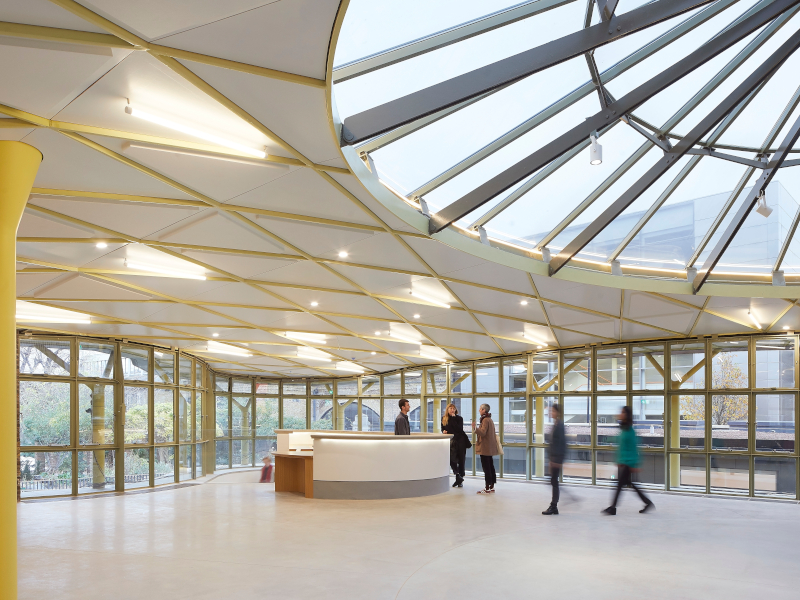 While we may have been largely confined to our homes for the last year and a bit – and their varying qualities have been the subject of more scrutiny than ever before – the rebranded Museum of the Home in Hoxton, (formerly the Geffrye Museum) has been closed for the past three, undergoing a transformation by Wright & Wright Architects.

Aptly for its subject, the museum is located in former 18th century almshouses, which were first converted in 1914 to become the Museum of Furniture with links to the nearby East End furniture industry. Extended at various times afterwards, including a 1998 project by Branson Coates, the museum has been looking to expand again for some time, but a previous scheme by David Chipperfield fell foul of planning because of its need to demolish an existing pub building on the edge of the site. Following a new competition, Wright & Wright was appointed in 2014. 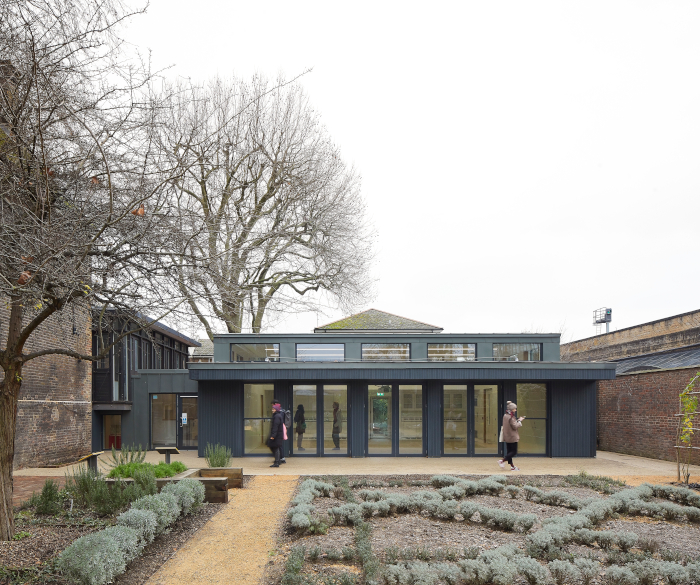 The redevelopment has allowed the museum to greatly expand its gallery space and provide visitor facilities such as a learning pavilion and events space, as well as stabilising the 18th century structure. A main entrance has been created from the site’s Hoxton station side – the route by which most visitors approach. The pub building, meanwhile, has survived, and now hosts the museum cafe.

Under Wright & Wright’s careful guidance, all this has been achieved without encroaching on the museum’s gardens and green space, much loved by the general public and a prized part of the museum. (It is in fact what saved it in the past: representing 14% of all the open space across Shoreditch at the time, the LCC bought the site in 1911 in order to preserve the gardens.) 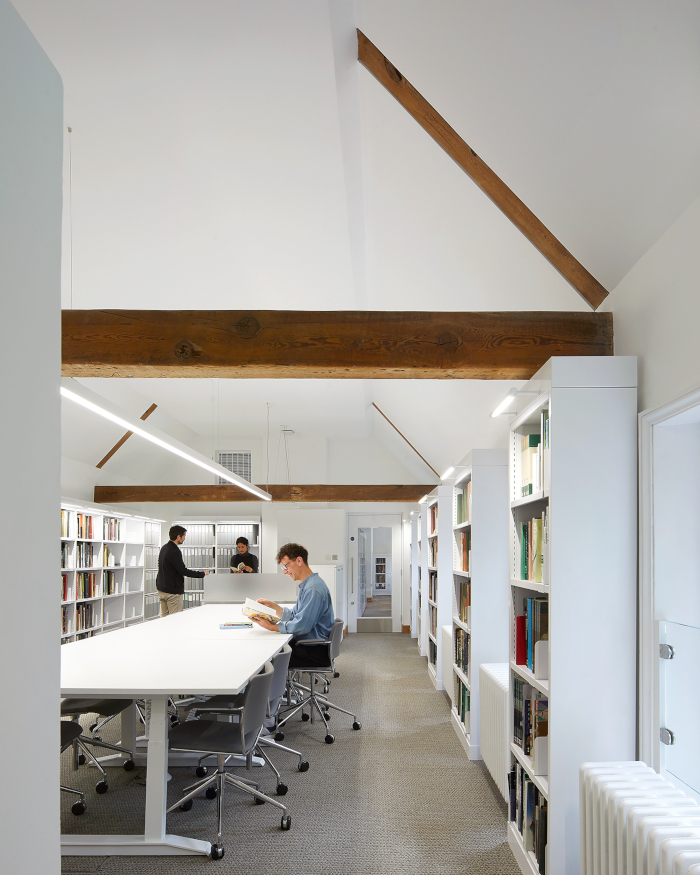 Opening up into the roof of the building for the new collections library, the architects uncovered and kept original oak beams

The studio has a lot of experience working with older buildings, and an eye for how to stitch together old and new in a quietly productive, elegant way (see our profile with founding partner Clare Wright in FX 316). While 80% more gallery space and 50% more public space has been developed, the new additions are small in stature and discreetly positioned. The increased capacity has been found by reorganising the existing almshouse building, and the fabric-first approach has resulted in no commensurate increase in the museum’s energy requirements.

Previous modifications, where a series of openings had been made directly next to the front wall, had destabilised the East Wing, explains Ronan Morris, architect at Wright & Wright. The architects switched the circulation route to the other side, alleviating pressure on the retaining wall, and reinserting a full first floor level to replace the existent lightweight mezzanines. Trial pits then revealed that the foundations were deep enough to dig down by a metre across the lower ground floor – crucially, unlocking a whole floor plate to be used for the desired additional gallery space. By ‘adding robustness back into the building’, Morris explains, ‘[it] actually unlocked a lot more usable space for the museum’ – going from one floor of the 100m-long building to three.

Across the lower-ground floor, the sequence of small residential areas offered an ‘eclectic’ space for display, but given the museum’s focus, the architects sought to celebrate these features and to ‘steer clear of the classic white box gallery’, Morris explains. They worked closely with the curators and exhibition designers ZMMA to best use these zones, variously highlighting objects or features of the building itself, and where architectural elements have been removed, their outlines have been traced with a brass line in the floor. Bricked-up windows have been reopened to reconnect with the gardens (the services engineers have mapped the light so that blinds can be closed at times when sunlight would damage the collection).

The almshouse chapel and undercroft are both gallery spaces that alter the pace of the visitor journey and offer distinct curatorial opportunities. Breaking from the colourful lime plastered walls of the home galleries, the undercroft’s brick arches have been left exposed. There are benches, allowing visitors to look out on to the garden, or to enjoy the sound exhibition – Mollspeak, by Maria Fusco and Olivier Pasquet, which was inspired by a servant’s box from the collection. 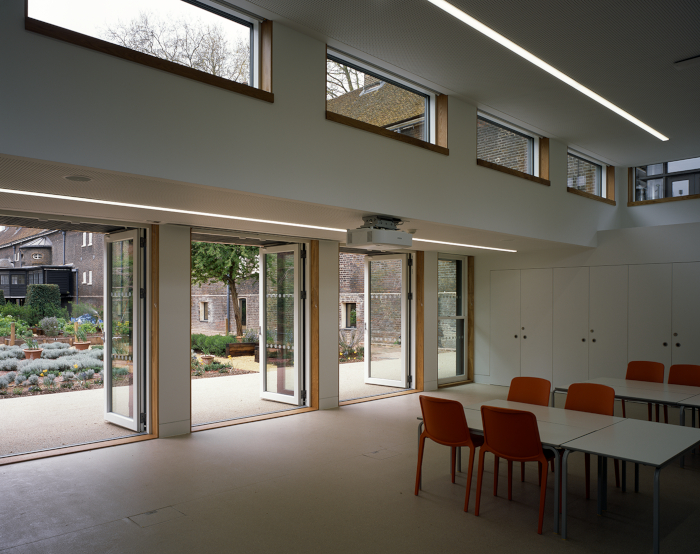 and the interior of the learning pavilion. Image Credit: HELENE BINET

The ground floor of the almshouses is where most of the original features have been preserved, including original wall panelling and timber floor. The architects worked closely with Historic England and conservationists The Georgian Group in their treatments. The stabilised first floor now provides collections storage that is up to modern standards and accessible, in addition to a new light-filled double-height collections library ‘carved’ into the roof of the building.

While the public no longer enters the museum through its pristine Georgian frontage, instead entering at the back, this elevation, Morris comments, ‘tells the story of what’s happened to the museum over the years’. He points out old windows, doors where former extensions led out to outhouses, and timber additions that hosted the museum cafe and a reading space at different times. It is into this ‘tapestry’ that Wright & Wright has woven its own ‘distinctly contemporary’ pavilions, Morris explains, carrying across the existing material palette of dark brick, timber and metalwork.

Their positioning was intended to minimise disruption to the green space: the learning pavilion is sleeved up against an existing wall to ‘stitch the building into the site and into the adjacent buildings’ while preserving a pre-existing herb garden; the studio is situated where the gardeners’ compound was, between the Branson Coates building and the boundary wall, and its green roof – featuring a 21st-century garden with low-maintenance, ‘dry, Mediterranean-style planting’ – effectively extends the Gardens Through Time instead of taking from them. 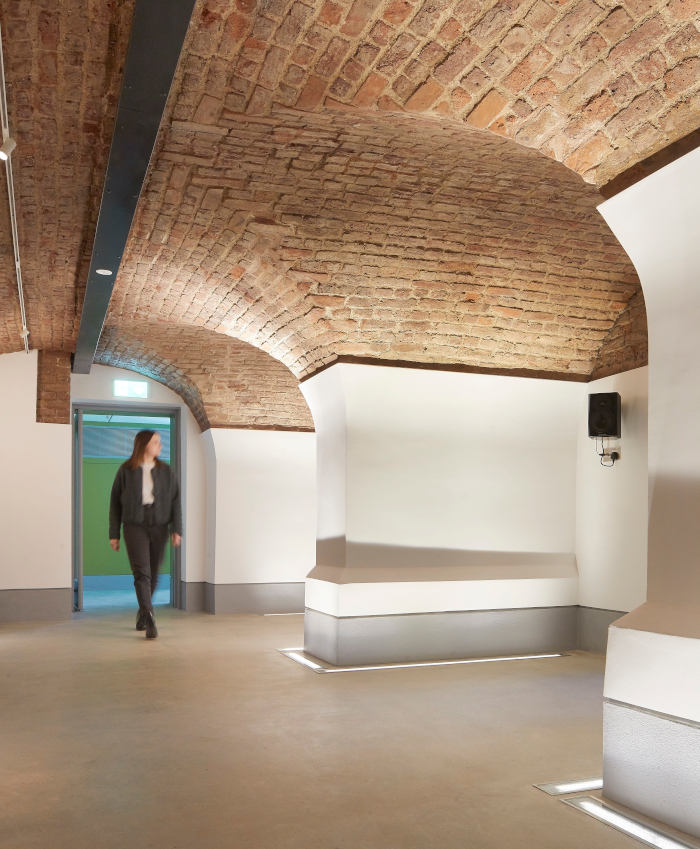 the exposed brick arches of the undercroft, previously the museum’s boiler room.

Considering this outdoor space an integral part of the visitor journey, connections were sought with the gardens from all the internal spaces as well as directly from the street. This flexibility of route, while helping with circulation through the museum, is also crucial to its role as a public resource – being somewhere that people can access and use as they want, Morris assures, somewhere where everyone can feel ‘at home’.

Museum director Sonia Solicari commented that the newly reconfigured museum ‘will be a starting point for ideas and conversation about what home means’, while being somewhere where visitors can ‘relate their own experiences and ideas of home’.

The extra space created gives the curators more room to cater for these conversations and opportunity to contextualise the existing collection. The existing period rooms, now named Rooms Through Time, display reconstructed living areas of middleclass homes dating from the 1630s to the 1990s. But, while fascinating in themselves, there was little chance to explore other demographics or different concepts of home. The new lower-ground Home Galleries are able to fill these gaps with thematic displays ranging from taste to the role of women in the home, and to working with charity groups to cover migration stories and the experiences of those suffering from or at risk of homelessness. ‘The idea,’ curator Vanessa Meade explains, ‘is that, hopefully, by the time visitors have come through the Home Galleries they’ve really set themselves up to be thinking about Rooms Through Time in different kinds of ways.’

The pavilions also create opportunities for an expanded museum programme. The light-filled learning space can cater for two school groups, while the multifunctional studio with a capacity of 80 is ready to host lectures, performances, debates and discussion, as well as a welcoming social event called the Sunday Roast. The gardens meanwhile, after much hard work from the gardening team, are flourishing and ready to welcome people back.