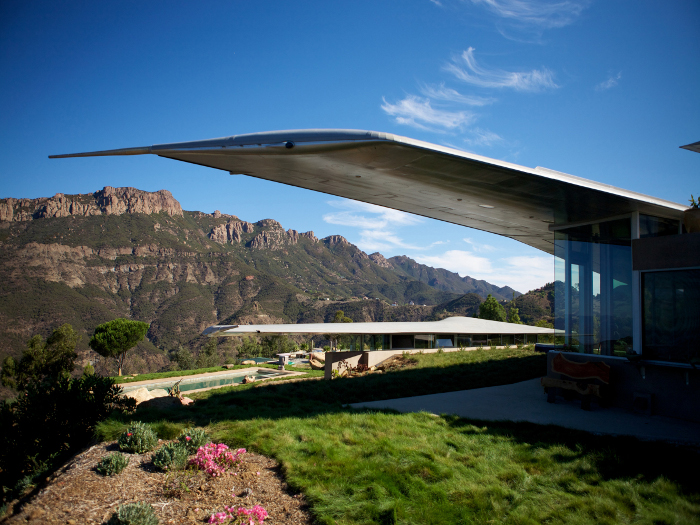 A unique house has taken shape in the foothills of the Santa Monica Mountains, with the component parts of Boeing 747s cut up and integrated - with some physical difficulty - into the house designed by architect David Hertz, of the Studio of Environmental Architecture

Is it a house? Is it a plane? Strictly speaking, both. It was the timeless, uber-functional design of a Boeing 747 that inspired, and eventually formed a crucial part of, the house David Hertz built for Francine Rehwald in the foothills of the Santa Monica Mountains, California overlooking the Pacific Ocean. The plan and the elevation of the wing house

And given his commitment to repurposing industrial waste, the environmental architect has used the lot. The wings and two stabilisers from the tail section enjoy star billing atop the main residence, while a studio outhouse has a section of fuselage as its roof. The upper deck that once housed first-class passengers now shelters a guest house on the property, while another piece of the fuselage has made it into the interior as a room divider.

And that's not all: the cockpit has been transformed into a meditation pavilion in which the windows through which pilots once looked serve as a skylight. Even the engine cowling has been incorporated on the 22-ha site as a fountain-cum-fire pit. Remaining bits of fuselage have been carefully stored to realise future projects on the site, including roofing for a barn. Starting with some literally blue-sky doodles and taking five years to realise, this project is likened by Hertz, of the Studio of Environmental Architecture in Venice Beach, California, to 'using every part of the buffalo, like the Native Americans did. 'My client had challenged me to come up with curvilinear, feminine shapes for the building. Standing on the property, I imagined a floating roof overhanging the site to allow unobstructed views', he says.

Soaring aircraft wings, with their massive span, came to mind as a design inspiration. 'But given that a wing-foilshaped roof would be complex and difficult to build conventionally, I thought, why not use a real wing?' This was not such a daft idea given the number of aviation graveyards in California where abandoned planes lay rotting, or, as Hertz so eloquently puts it, 'dessicating in a desert of obsolescence'. He adds: 'These boneyards of industrial technology seemed to have great potential for secondary uses. The material processes used to make the wing represent one of the most efficient use of resources in achieving the highest strength with the lightest weight.'

But was there a law against recycling aircraft into residences? 'After verifying with the building department that there was nothing specifically prohibiting the use of an airplane wing as a roof, we examined whether other components might be used for additional structures on the property. We did find we'd have to register the roof of the house with the Federal Aviation Authority (FAA), though, so pilots flying overhead did not mistake it as a downed aircraft.' Hertz also had to answer questions from Homeland Security about exactly why he wanted to buy what since 9/11 had become a potential weapon of mass destruction, and get approval from 17 US government agencies. The plane's wings, which were separated for transport, were reattached to form the basis of the unique roof structure Photo credit: Douglas Hill The house has dramatic view all around Photo credit: Douglas Hill

Having identified his aeronautical salvage yard and determined that the 747-200, with a single wing able to cover 232 sq m, was the model to go for, Hertz persuaded his client, who was only too receptive to the mad idea, to fork out $30,000 - about £18,000 - for an abandoned model.

It turns out that passenger planes, which cost around £150m new, are terrific value once their flying days are over: 'The scale of this aircraft is enormous - more than 70m long, 59m wide and 19m tall - a tremendous amount of material for the money,' Hertz says. But perhaps this plane had exhausted its flying days more than most, as it was one of the first 50 747s ever built, commissioned by the long-defunct Pan Am. Then came the very tricky logistics and eye-watering expense of getting the material to the site: 'First, using a laser, we beheaded the plane, removed the tail and cut it longitudinally. Next, transverse sections reduced the segmented fuselage and wings to a manageable size for transport,' he says. But not just any transport: three freeways and two highways had to be closed while the California Highway Patrol escorted trucks loaded with giant wing sections measuring 38m x 14m. The repurposed wings feel as if they were custom-made for the house Photo credit: David Hertz Once safely arrived at Camarillo, the nearest airport to the site, the wings had to be cut in half to position for suspension from a Chinook CH-47, the world's largest cargo helicopter, for their final journey into the remote hills. Hertz defends what he admits was 'a very large carbon burst'. But the total emissions and embodied energy of transporting these large pieces was less than the transportation of thousands of small parts in a typical construction, and made the $8,000-an-hour [£4,800] cost of transporting the parts 'realistic'.

Concrete walls were cut into the hillside to support the wing structures and steel brace frames attached to strategic mounting points on the wings where the engines were previously mounted. Existing retaining walls from a previous building on the site, part of designer Tony Duquette's estate destroyed by fire in 1993, were reused to minimise the need for any significant grading and its impact on the topography and landscape. Frameless, structural self-supporting glass created the enclosure from the concrete slab to the wing roof. The two-year construction phase was far from simple, with 'winging it' acquiring a literal significance for the sometimes befuddled architects: 'In the absence of data from Boeing, which was concerned both about proprietary technology issues and post-9/11 issues of national security, we needed to investigate the wing by cutting it up and then piecing it back together,' says Hertz. But $2m later, the Wing House was finished, winning numerous awards over the next two years.

The house retains and exudes the essence of flight, even though the wings have been radically reconfigured from their initial position on either side of an aeroplane cabin. Now, one floats above the other in a cascading design that makes them clearly visible as aviation parts when viewed aerially. Teardrop-shaped cross sections that once connected to the body of an aircraft are now exposed to the elements, showcasing beautiful, normally hidden attachment devices. Yet the nature of the wings, with their long span and shiny, reflective surfaces also causes them to recede into the landscape rather than competing with the real show-stoppers, the sea, sky and mountains. As Hertz puts it: 'They cascade down the ridge line, integrating the structure into the landscape.'

But whenever Francine Rehwald, a retired Mercedes-Benz car dealer, wants to pay homage to the origins of her thrilling new home, she need only step out of her bedroom, to which one of the wings is connected. From here, it's just a step down to the companion part, allowing this visionary homeowner to achieve what no 747 pilot ever managed, and go wing-walking as she gazes over an unparalleled view to the ocean. 'The message is repurpose, reuse, and to think what you might build out of a discard,' she told CBS News when it visited her new home. And the message, which to be fair is an echo of the architect's, has been heard far and wide, with another 747 being converted into a hostel to sit on a disused runway at Stockholm airport, around 8,900km away from the glamorous Wing House and a planet away from its breathtaking setting.