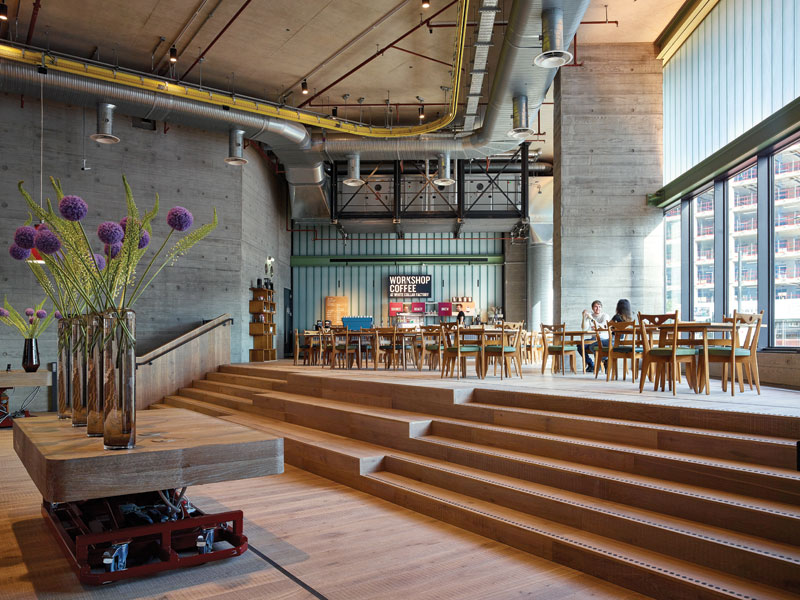 There’s more than a hint of French designer Jean Prouvé at London’s Old Street roundabout nowadays. Wall panels perforated by grids of circles clad the sides of the new 15-storey White Collar Factory (WCF) tower, looking just like those on Prouvé architecture, including the Maison Tropicale (1949–51). 'Prouvé is a hero of mine’, says Simon Allford, partner of AHMM, the practice for the new £76m mixed-use ‘urban campus’ in Old Street. Inside, there is more Prouvéness, from colours to his whole practical, engineering-led but stylish approach.

WCF started as a working title that developer Derwent London and AHMM had for a project exploiting passive energy performance and offering flexible warehouse-type spaces. ‘We like light and volume, we like robust industrial buildings,’ says Allford. Announced in 2010, WCF followed on from two previous collaborations with Derwent — the Tea Building, Shoreditch (2004), once warehousing and a factory, and the prize-winning Angel Building, Islington (2010), previously unloved Eighties’ offices.

The Old Street site previously featured mostly Sixties’ offices facing the roundabout, which were demolished to make way for the WCF. The development consists of six buildings, including a tower. The lower buildings are conjoined into a U up to five storeys tall on half of the site, including two repurposed buildings retained on the south, and now presenting a brick clad frontage along Featherstone Street. The U encloses a new public space called Old Street Yard, paved with Victorian stable blocks and hosting Corten planters and a sculpture by Robert J Price of a young man holding a mobile phone. This is perhaps a nod to the Silicon Roundabout label the area has had since 2010, when it was earmarked as London’s response to Silicon Valley, and WCF was announced. Under the Old Street Yard is a large, double-height space called the Engine Room. Here, a master chef will take on 10 trainees in a cooking incubator project. Also underground are two levels to store 300 bicycles, ventilated by fresh air from its ground-floor gate entrance.

The site is dominated by the 22,900 sq m tower on the northern side. Its enormous, open, ground floor has a hip Workshop Coffee bar spread across a terrace up a few steps. Behind the tower, a further five buildings include two with previous facades retained

With its concrete walls and columns exposing structure, suspended tracking and ventilation pipes in the ceiling, wood flooring, chunky lamps and not least its extraordinary furniture, the double-height space is brutalist meets high-tech, but in a quirky retro way. Strips of vertical frosted glass echo Prouvé’s Maison du Peuple (1939) in Clichy. The AHMM-designed reception desks are big, height-adjustable contraptions on wheels that plug into the floor for electricity, made with off-the-shelf components — Allford says they’re about ‘taking found objects, the [Marcel] Duchampian idea of objets trouvés’. Beneath a Prouvé metallic louvred panel on the wall are chairs that are recreations of Pierre Jeanneret’s for Fifties’ new town Chandigarh, India, masterplanned by his brother Le Corbusier.

The aesthetic of raw, robust industrial chic continues in the open-plan office floors, which all have a 3.5m ceiling height, opening into corner double-height voids on the top two floors. Floors are raised 150mm for power and data lines. Concrete walls show the larch shuttering used in setting. There is more concrete cool, literally — key to passive-energy exploitation are the ceilings slabs, embedded with cold water pipes, thus making the concrete an active thermal mass (as at the University of Amsterdam, where AHMM recycled two modernist blocks in 2014). ‘It’s simple with not many moving parts, nothing can go wrong,’ says Allford. With natural perimeter ventilation, there is no need for air conditioning, and engineer Arup has created an app that monitors climate in local microzones. Red light signals tell when not to open windows. All this has contributed to a BREEAM Outstanding rating.

The facades with their circle-punched aluminium panels range from 70 per cent glazed facing south to half that on the north. Structural concrete columns include flat perimeter wall sections. On the two highest office facades are openable portholes in metal panels — looking through one is like peering into a washing machine and finding a vista of London. Here and there are surfaces in Prouvé shades from vanilla to green — a ‘direct homage’ to him, admits Allford.

Above the offices on level 14, a 150m-long running track encircles the plant within a roof track for window cleaning. The changing facility nestles into the plant outcrops, screened by vertical cedar strips. Above them on level 15 is a club house. It’s jarring to see the lurid-green fake grass on its patio, a response to anticipate the heavy footfall.

Otherwise, the entire composition, from the lifts’ aluminium interiors and the green metal stair bannisters to the bathrooms with glazed white tiles, is brilliantly consistent. Designed for indefinite hard use without dilapidation, it is distinctive in a forthright, slightly eccentric way that resonates with Prouvé. Allford sees it as a ‘research project’, and lessons from it will be applied to Soho Place, a AHMM-designed theatre and retail development on Tottenham Court Road, due to complete in 2020.