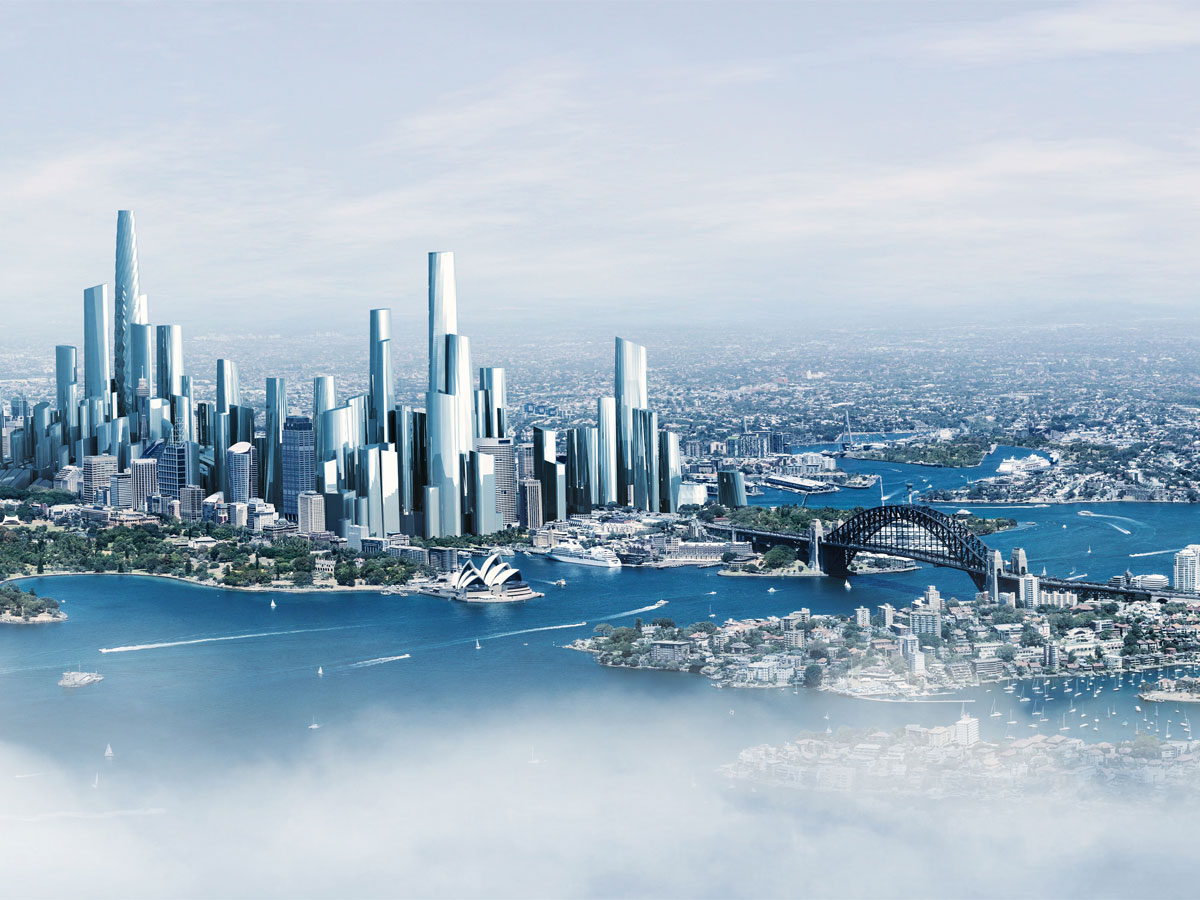 Bates Smart proposes a sky-high CBD for the future

A Sydney-based architectural practice Bates Smart has proposed a vision for the city's 2050 skyline. Director Philip Vivian has created a concept that challenges height limits while incorporating sustainability, transport and economic development.

The debate began in 2014 through a Sydney-based lobby group - the Urban Taskforce - who commissioned three architects to design their vision for Sydney in 2050. Not only did Vivian forge a design, but he took it further and pitch his concept in New York this year to the Council on Tall Buildings and Urban Habitat (CTBUH), an international body assessing tall buildings and sustainable urban design. Vivian's study looks at the best way to accommodate the city's growth, height and density, and defies Sydney's current height limit of 235m to do this.

For years cities around the world have set height restrictions, even Bali restricted the height of new structures to not bypass the height of a palm tree while undergoing a population boom in the 1970s. The concept returns to the city's aesthetics and ensuring its character and beauty are not lost. Sydney's tall building limit is in accordance with the underside of the habitable floors of Sydney's Centre Point Tower - a landmark of the city similar to those in Seattle, Vancouver and Auckland. However the Bates Smart proposal believes the tower, built in the 1970s, is no longer a cause to define the height restrictions.

'To be a global city Sydney must have ambitions beyond a 1970s landmark,' says Vivian. The projected population growth from 2011 to 2051 is huge, going from 4.39m to an estimated 7.26m. The design suggests a new transport system - a 'Rapid Transit System' or RTS - that would assist the city in its density increase. The existing heavy rail network will service outer ring suburbs and express lines into the CBD, while a new lighter rail will service the inner ring suburbs and city centre. 'For Sydney to sustainably increase density it needs a fully integrated transport system. Our proposal is for future supertall development in the city to fund a sustainable transport system' says Philip Vivian.

Funding for the RTS will be drawn from a new concept deemed 'Supertall Floor Space' purchased by the government. This works by allowing supertall floor space on buildings within 200m of a rapid transit station. There are other parameters included in the proposal, such as overshadowing, which account for the wellbeing of the public. The Urban Taskforce's commission for proposals has caused a huge media stir in Sydney including criticism from the Planning Authority and disputes with the local chapter of the Australian Institute of Architects. One of the factors contributing to the media uproar is the strict and complex planning legislation of the City of Sydney which is more than any other Australian city.

The public debate has led to the New South Wales state premier and planning minister announcing their support of additional height in the city's future growth.