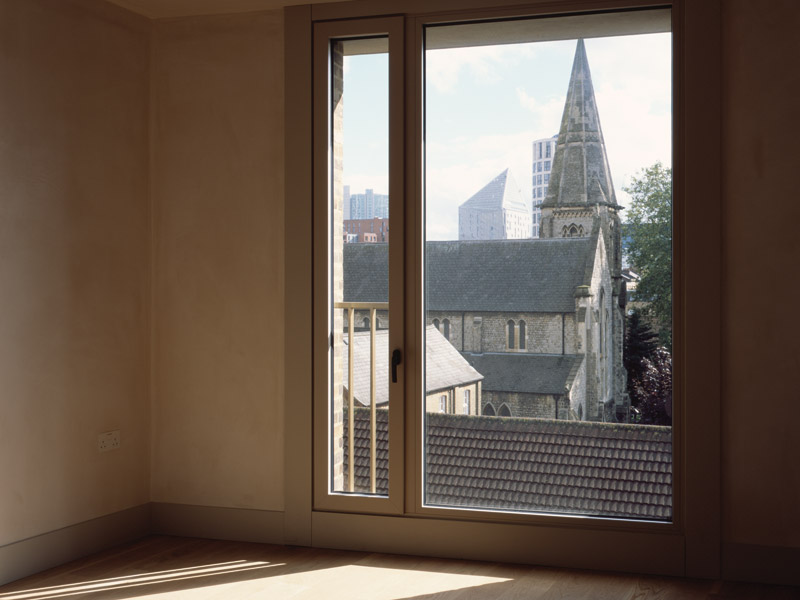 Forget about open-plan living, it’s all about the split section and flexible homes that work with the occupier and maximise the use of space, as Jaccaud Zein Architects’ and design-led developer Solidspace’s new residential development in Shoreditch attests to

While many house-builders, driven by profit, are cramming shoebox apartments into tall, generic blocks, playing a numbers' game to build quickly and cut costs, developer Solidspace is on a mission to create well-designed homes built to last. It might not seem like much to ask, but then in view of the limited supply and choice of new housing, and a market dominated by big-volume developers, it's no wonder that, according to a RIBA Future Homes survey, 75 per cent of us would not want to live in a new-build home if given the choice. A diagram showing Solidspace's split section, used in every one of its projects to maximise space and create double-height voids

Solidspace has carved itself a niche, promoting development as an art form and creative process that views housing as more than just a commodity. 'We have this philosophy called buy-to-live, not buy-to-let,' says Gus Zogolovitch, who heads up the company with his architect father Roger. 'We believe that there is a growing number of people who want a new-build, but don't want what's being offered by other developers. Our philosophy is all about trying to sell places that people actually want to live in. We want to create housing that is designed and loved, and built to age well.' That means injecting projects with care, thought and attention, putting the occupier centre-stage and utilising every bit of space with its characteristic split-section form, used in each one of its projects in collaboration with some of the best architects out there. The split-section form is used in both the houses and apartments, with the houses having three half-levels of living space and balconies overlooking the double height spaces. All images Hélène Binet

'We never understood how you could get work in London; it seemed very mysterious to us coming from Switzerland,' says architect Jean-Paul Jaccaud. 'We thought the best way to get to work was to somehow generate it ourselves. We looked around for investors and went around cap in hand.' Through a friend they met Roger and Gus, keen enthusiasts for alternative models of self-build and custom build.

Adds Jaccaud: 'We felt a bit like babes in a wood doing a development in London. It felt a little bit irresponsible without someone there to hold our hand through the whole thing.' On the site of a Seventies' building, the project draws inspiration from the continuous Georgian terraces it faces. A contemporary interpretation of the terraced house is reinstated on Shepherdess Walk, the four-storey homes are subtly delineated only by the lines of black rainwater pipes and individual doors. The brick facade gently folds to open up to an adjacent park opposite, before folding again on to Wenlock Street to avoid a sharp, awkward corner at the road junction. As the streetscape on Wenlock Street gets higher, with bigger post-war housing blocks, the apartment building rises up in scale beyond the houses, separated by a low wall concealing the houses' back gardens. Tying the two buildings together is a thick band of concrete cornicing that caps the brickwork.

Both buildings are clad in a brick sourced from Belgium that was chosen to reflect the patination of the terraced facades opposite and blend the development into its context. Barely perceptible to the eye, slight variations in the pointing of the brickwork give the facades a gently aged appeal. Says Zogolovitch: 'It has this really timeless quality about it; it looks like its been here forever. Often new buildings can slightly look like an alien has landed so it's nice to feel that this finishes off the corner so much better than the building that was there. That's what good architecture, good design and good development is all about.' The living spaces are connected by stairs, doing away with the need for corridors

No expense was spared on the material finishes, from very deep window reveals to give a sense of weight and presence to the buildings, to solid-brass balustrading to the windows and tactile walnut details inside. 'When Jean-Paul said let's go for solid-brass balustrading I had a bit of an intake of breath, but you need that level of attention and detail if you want these things to last 150-200 years,' says Zogolovitch. 'You've heard of the terms slow travel, slow food, slow cooking? I now refer to this as slow development, because the reality is these things take time; what we haven't done is take a ready meal and stuck it in the microwave. At Solidspace we like to craft things and think about it.'

Inside, both the houses and apartments use Solidspace's split-section form. The houses have three half-levels of living space clustered around a double-height space as well as four bedrooms, a small back garden and a roof terrace. Balconies overlooking the double-height space provide links and views across and above, while large windows allow light to flood from one space to another. The split section allows for different ceiling heights - taller on the lower levels, decreasing in height as you go up the building - and because stairs connect the levels, there is no need for corridors, saving much-needed space for where it really matters. 'Each level is not actually a very big space, but it does so much to give you a sense of volume and generosity. There's no sense of enclosure or it being small,' notes Jaccaud. This roof-top dwelling has its own patio area

The apartments, meanwhile, vary in size from one-bedroom to four-bedroom flats (of course, they're not actually flats...), with the split-section configuration allowing for maximum flexibility. Whole rooms and floors can be divided off, whether it's for an elderly relative coming to stay, teenagers in need of their own space, an Airbnb rental or work-from-home studio. Each apartment even has three front doors connected to the communal stairwell and separate entry phones for multiple access and complete autonomy from the rest of the flat. Explains Zogolovitch: 'One of the key things we try to think about is how people actually live these days. It seems so strange that we carry on insisting that our homes should be based around a Victorian floor plate. We now have flexible lives that have different working patterns, more freelances, people working from home, and I think that's what we're trying to accommodate.'

While open-plan living is going out of fashion, architects now use the term 'broken plan' to describe homes that can adapt to suit the needs of families and provide quiet areas for independence and privacy. Solidspace's split section is leading the way.