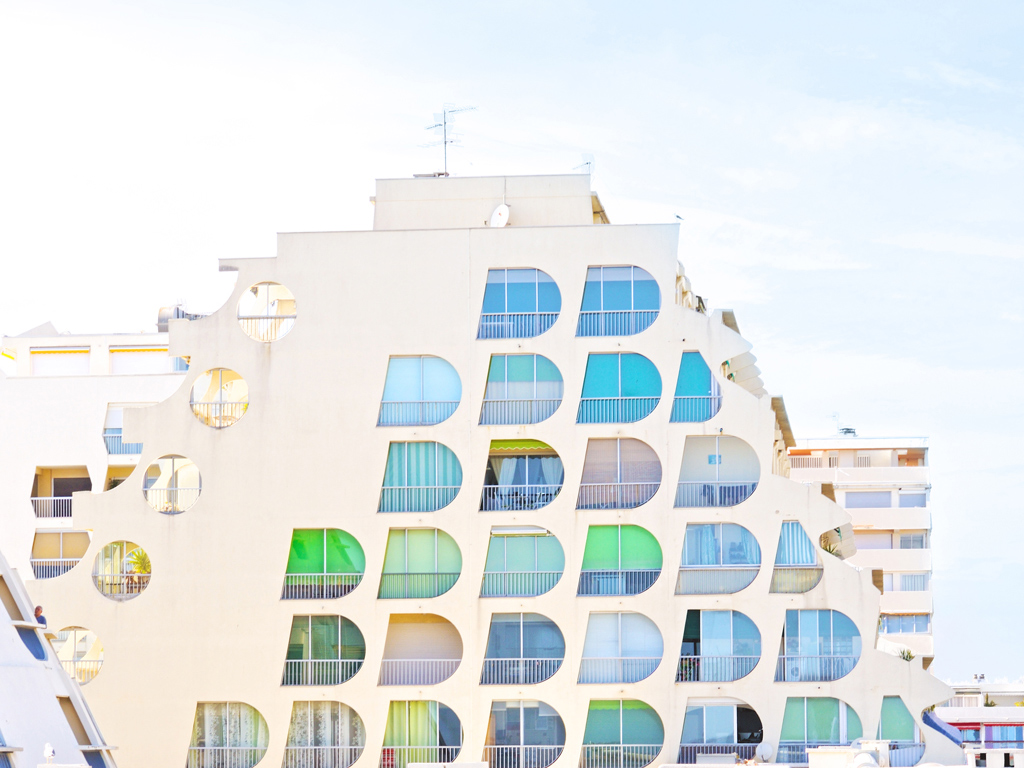 Photographer Patrizia Mussa has captured the extraordinary holiday architecture of Jean Balladur in an exhibition at the Wilmotte Gallery, London. Herbert Wright looks back at the emergence of La Grande Motte and casts a critical eye over the show.

A host of immaculate, futuristic seaside towers are bathed in brilliant sunshine. Each is different and they seem deserted, but not quite. A plant here and there is well tended. On the strangely shaped balconies that tesselate across the facades, you may, very occasionally, find someone standing there, motionless, looking out.

This is not Dubai Marina, but another place built for the pleasures of the leisured, forty years earlier. La Grande Motte, near Montpellier in the south of France, is a unique architectural resort town designed by Jean Balladur. Its bizarre and dazzling apartment blocks have been captured by the Italian photographer Patrizia Mussa, and her photographs can be seen in Le Temple du Soleil, currently on show at the Wilmotte Gallery, London, and available as a book. Referring to the strong chilly wind that blows from the interior, Mussa says 'I arrived in winter on a strong mistral. It was an incredible place, I thought I must photograph it'.

No wonder. There is something surrealistic about the place, especially the blocks of mainly holiday-let apartments built from 1967 to the mid 1970s. The Mediterranean was experiencing a building boom to accommodate holiday makers, but La Grande Motte was nothing like the vast rectilinear upbuild of, say, the Spanish resorts. Instead, Balladur was inspired by the first-millennium pyramids of Teotihuacan and Niemeyer's curving concrete in Brasilia, both of which he visited. La Grande Motte's pyramids rise up to 15 storeys in a variety of expressive forms, their white concrete gleaming, and each with a different signature created by the external elements repeating across it. Looking at Mussa's images brings out other associations. Sometimes there's a distinct maritime echo, some facades evoking the sides of great passenger liners. One building, where the windows are like italic Ds, even suggests the momentum of a moving ship. Mussa reveals that some shots were from a streetlamp-servicing platform. We don't see the ground, so the buildings are all floated in space and light, without anchor. That brings out their sci-fi futurism, so much so that some look like fantasy buildings risen from underground spaces in Thunderbirds, a 1960s Gerry Anderson TV series.

Balladur often used colour, and Mussa lets it speak, especially against skies whose blue is so pale that you wonder if it is over-exposed. When she photographs facades straight-on, the result has a flat precision of a draughtsman's drawing. But she likes angles as well- finding particular angles that bring out the three-dimensionality of Balladur's forms, or celebrating the angles in those buildings where the the triangle rather than a curve defines a building's motif. La Grande Motte is clearly a dazzling place. Mussa's eye highlights the hypnotic qualities in its repeating but ever-varied architecture. By virtually depopulating it and detaching the buildings literally and atmospherically from the down-to-earth, she also brilliantly captures a serenity that pervades the place. Behind the scenes - Sinatra: The Man and His Music