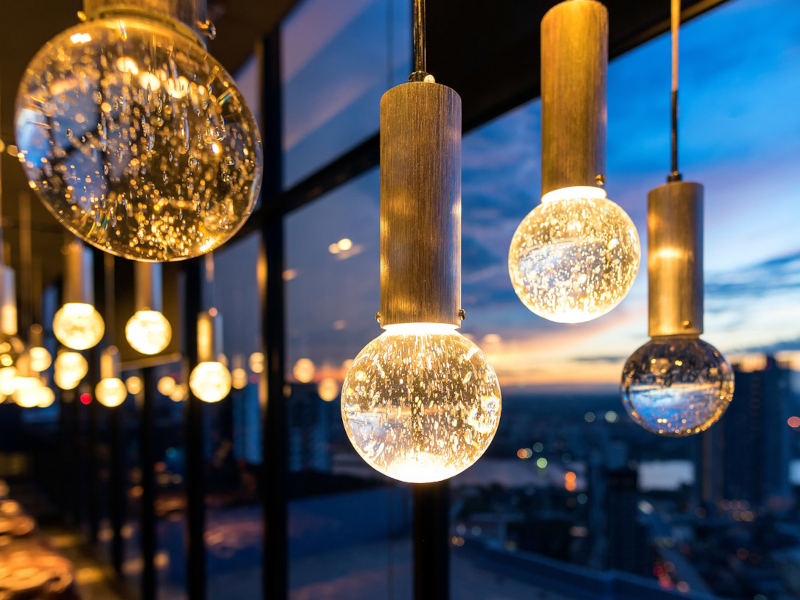 AS A BOY in the 1970s I remember walking into my (then) local high street in Sevenoaks by night. On the way the roads were somewhat dimly lit and when you got there only the occasional shop window was illuminated. The sum total of the exterior lighting scheme for Bligh’s Hotel was a solitary lantern hanging over the main door. In those days perhaps not the most energy efficient of technology, but there wasn’t that much used and what there was lasted a long time. The stores themselves and their fi t-outs seemed as permanent and unchanging as the seven oak trees on the north side of the cricket ground.

Jump forward 30 years and energy efficiency had improved, but cleaning, repairing and relamping, keeping things in use – all forms of life extension – were still a normal part of lighting management. Move forward another 15 years to around 2015 and we were at the beginning of the LED revolution.

LEDs gave us energy efficiency, a useful reduction of heat and, when of decent quality, long lives with vastly reduced maintenance. Compared with my dimly lit high street of the 1970s we saw an explosion of hospitality and retail development, all with many, many more luminaires than before – albeit much more energy efficient ones. The rate of churn in those stores and hospitality venues, or the frequency of fit-outs, made some of them seem as impermanent as those same seven trees when faced with the Great Gale of 1987.

And here’s the rub: the old joke about how many (fill in your stereotype) does it take to change a light bulb doesn’t work any more. The LED board and the driver is often integral to the fitting, so if one were to fail you have to replace the whole thing – you simply can’t repair it or extend its life, even if you wanted to. Lease provisions typically give the landlord the option to enforce restoring a unit to its pre-let condition. The result: thousands of light fittings thrown into the skip every year. We’ve all become used to this throwaway economy, only pausing to grumble that our washing machine or TV doesn’t last as long any more, while we order the (cheapest) shiny new one.

By now you are probably thinking that this Bob Bohannon bloke is a bit of a Luddite, stuck in a pre-LED world where everything looked better through (2,900K tungsten halogen) tinted spectacles. Compared with tungsten halogen and fluorescent, LEDs are more energy efficient, they have been responsible for huge savings in emitted CO2, they are part of the drive to net zero and they are part of the green jobs revolution that drives economic growth. LEDs have allowed designers to be more creative with light, especially when integrated into fi t-out displays. Low individual wattages, miniaturisation and LED tape allow many more lighting points – often to good effect. But this is not the whole story: we might have a problem.

Now many would think, not unreasonably, that we recycled all those replaced fluorescent fittings, tungsten halogen spots and first-generation LEDs that didn’t last quite as long as hoped because the manufacturers were still on the learning curve, or generation-two LEDs where cost savings compromised reliability – but I present you with an inconvenient truth: ‘In 2019, 42,000t of lighting equipment were placed on the UK market,’ said Nigel Harvey, chief executive of the UK’s leading WEEE-compliance specialist Recolight. ‘Only 2,700 were recovered through WEEE schemes. The amount officially recorded as reused was zero,’ he continued.

So what happened to all these luminaires, not forgetting that the WEEE directive came into force in 2003 so any equipment 18 years old or younger all proudly bore the crossed-out wheelie bin mark? The inconvenient truth is that the vast majority were sent to landfill. According to Recolight, less than 7% were sent to a grandly named Approved Authorised Waste Treatment Centre. Of those that did, much of the value in the light fitting was literally shredded, to recover just the metals, which themselves would need energy inputs to melt them down for reuse. Green? No. Recycling in lighting takes the problem off your hands, but it doesn’t fix it.

Our old method of resource usage under the typical economic model has been referred to as take (resources from the environment), make (products in factories), waste (dispose of products into the natural environment). As Dr Mark Carney, the former head of the Bank of England, asked in his recent BBC Reith Lecture: ‘Why do financial markets rate Amazon as one of the world’s most valuable companies, but the value of the Amazon appears in no ledger until it’s stripped of its foliage and converted into farmland’.

We can pose a similarly awkward question in retail lighting. The day before Arcadia group closed its stores, its high-quality track spots were delivering a valuable service – after all, most of us shop with our eyes, so appropriate lighting is a given for retail success. So why, on the day after, did those same fittings become scrap? They had good, valuable life left in them, all we lacked was the commercial infrastructure to exploit that. 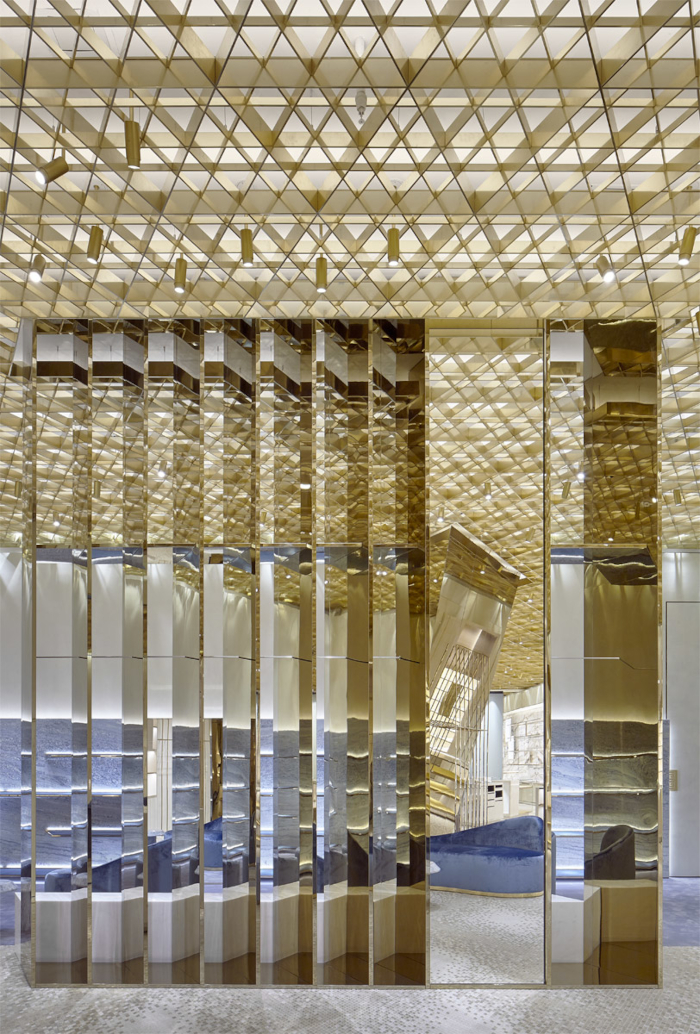 The retail sector, with its well-established and widespread use of track and spot, ‘should be the early adopter for practical reasons as well as its high churn rate of equipment’. Image Credit: VERSACE, MIAMI, BY CURIOSITY

Stop and think of where new light fittings come from. Let us assume the Far East. A light fitting’s in-use CO2 is considerably higher in percentage terms than the CO2 embodied in its manufacture, but it’s all measurable, especially if you have to mine and smelt the aluminium and the casting machines were powered by coal-fi red generation. Some of the elements in LEDs and electronics might be in limited or at-risk supply (the EU describes these as ‘critical raw materials’). Some, for example cobalt or tantalum, can be conflict minerals.

The circular economy is about keeping products at their highest value for as long as possible – in our case keeping a light fitting as a light fitting by a process of good product design, product quality, and serviceable and upgradeable components. If a store changes, lights shouldn’t be thrown in a skip.

Luminaires should be able to be repurposed, reused or remanufactured and this requires not just product design changes but an ecosystem of supporting services – more green jobs, but this time locally based green jobs.

Things are changing, first slowly and now more rapidly. The UK government’s industrial strategy has confirmed ambitions to double resource productivity and to eliminate avoidable waste by 2050. The European Union’s Single Lighting Directive (adopted by the UK government) requires the replaceability of light sources and separate control gears (LED drivers) on new luminaires placed on to the market after September of this year (though stocks of existing fittings can be run out).

A handful of manufacturers, from large multinationals and national players down to smaller operations, should be applauded (and maybe rewarded with our custom) for their hugely positive moves towards circular economy-capable fittings, supporting ecosystems to keep them in operation and use of a disparate array of accreditations.

You might be thinking that retailers have enough problems already, why should they bother? The combined challenge of the move to online shopping and Covid-19 lockdowns are maybe far more important agendas. But customers, especially younger ones, are becoming ever more environmentally aware – they can see through green-wash and they want authenticity in the stores they frequent. 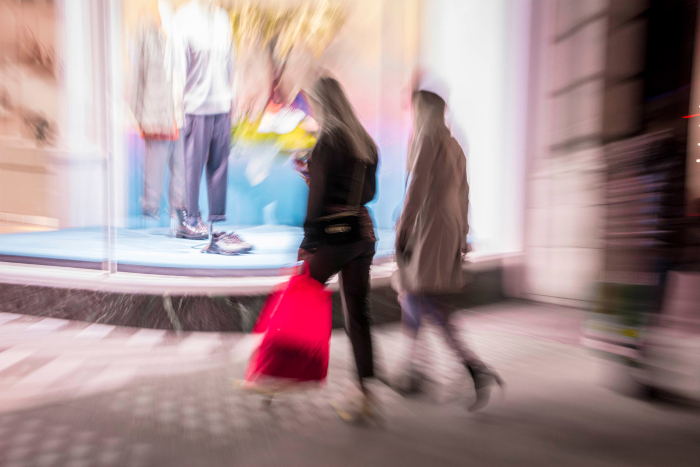 But the retail sector, with its preponderance of track, should be the early adopter for practical reasons as well as its high churn rate of equipment – fittings can be easily demounted, upgraded, improved, checked and reinstalled. At least one manufacturer even has a mobile workshop with a float of fittings where they’ll come to site, upgrade the fittings and keep the store lit while they do so.

Much responsibility lies with the lighting specifier and what they should be considering alongside basic factors such as light output, distribution and aesthetics. The following is a basic, five-point guide that is a starting point to establishing that specification is on the right path:

As Ellen MacArthur, whose eponymous foundation was established to accelerate the transition to a circular economy, has said: ‘There is a massive economic opportunity out there to be taken without waiting for government legislation.’ Specifiers of retail and hospitality lighting and the stores themselves can not only be green, but can be seen to be green. It’s highly likely that, over the long term, it won’t cost more – but it will cost the planet less.