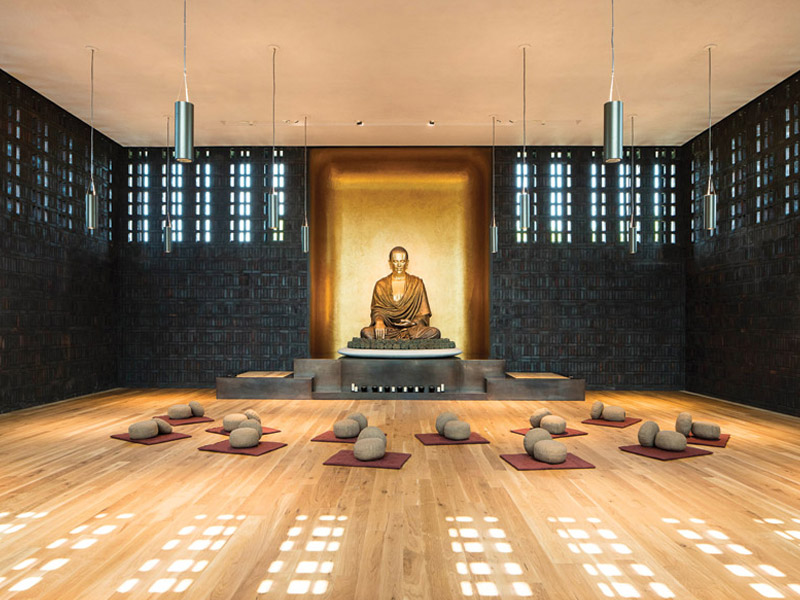 Peace and tranquillity is waiting to be discovered at a Buddhist retreat in the heart of the Suffolk countryside, subject of a £4m transformation that has seen the conversion of old barns and farm buildings, so that more meditation practioners and stressed-out city folk can find release. Cate St Hill reports

Deep in the bucolic backwaters of the Suffolk countryside, a couple of miles from the idyllically named village Walsham le Willows, stands a cluster of anonymous low-rise buildings, home to the Vajrasana Buddhist Retreat Centre. Buddhists, stressed-out city dwellers and carers in need of respite have been coming here to Potash Farm for retreats since 2000. Now, following a £4m transformation by Walters & Cohen Architects, the centre has reopened, redundant barns and old farm buildings being replaced by tranquil, landscaped courtyards and a glowing jewel of a shrine room.

A landscaped courtyard with the accommodation blocks. Image: Dennis Gilbert/View

Run by the London Buddhist Centre (LBC), the new building follows the Buddhist principle of ‘doing the least harm’ by building on the footprint of the old farm. The brief called for a beautiful centre that improves health and wellbeing, and enhances the spiritual life of the community. The original farmhouse, built in 1903, has been refreshed as the main staff quarters, while capacity for those on retreats has increased from 34 to 60 people in the new purpose-built, single-storey block. With a simple, pared-back palette of materials, marrying images of archetypal farm buildings with modern architecture, there’s an instant sense of calm about the place, from the crisply detailed, cloistered walkways to the carefully framed views of the surrounding landscape. Modest but not austere, it has a feeling of serenity, without imposing its spirituality on the viewer. Walters & Cohen embarked on the project by going on a weekend retreat and learning to meditate, ‘largely just to see how people move around — there’s lots of taking off shoes, putting them on again and drinking cups of tea,’ says Cindy Walters. As the first new building designed specifically around the Buddhist practice in the UK, as opposed to reusing existing buildings, Walters & Cohen spent a time researching historic temples as well as contemporary shrines. Says Walters: ‘There was really no contemporary precedent for this building. We found one in Thailand where everything is open-sided and thought that would be nice, but not very practical in Suffolk.’

Having a very engaged and creative client team — including an architect, artist, poet and psychiatrist — helped formulate the spaces by focusing on the experience of visitors. ‘We’d been really trying to wrestle with how you give form to Buddhist values. What would it look like? A building that not only housed all the practical requirements of gathering 60 people together but also expresses our practice,’ says LBC project coordinator Maitrivajri, an architect who was ordained in 1997 and whose name means ‘a diamond thunderbolt of universal love and kindness’. ‘In our order we have a strong emphasis on spiritual friendship, collective practice and communal living. Right from the beginning, the whole notion of the courtyard started to emerge.’

Long, pitched-roof huts, clad in dark, charred timber, frame a landscaped communal courtyard that leads visitors to the sacred Temple Precinct where meditation takes place. Living and dining areas are arranged along one side of the courtyard, with bedrooms on the other two sides. Inside, rooms are sparsely furnished, and utilitarian concrete block walls are painted white. Exposed pitched roofs provide a sense of space, and light floods in from skylights. Says Walters: ‘We had this real struggle: we weren’t designing a boutique hotel and it’s not somebody’s home, but we wanted it to feel quite special and different so we added that extra height.’

The journey continues along a ‘devotional axis’ to the Temple Precinct, comprising two smaller courtyards and a double-height shrine room. The Three Jewels, the ideals at the heart of Buddhism, are expressed spatially as these three courtyards linking the spaces. ‘You move from a collective, more informal activity through a quietening process as you enter the space for meditation,’ explains Maitrivajri. ‘The perforated brick wall really starts to give a sense that you glimpse something and the play of something being revealed and concealed.’ The shrine room is the one space that feels really enclosed, without distractions from the surrounding landscape. Sunlight filters through high-level perforations in the brickwork, while the focus of the room remains a large golden Buddha statue. Back outside, it’s time to put your shoes on and face the real world again, restored and refreshed.