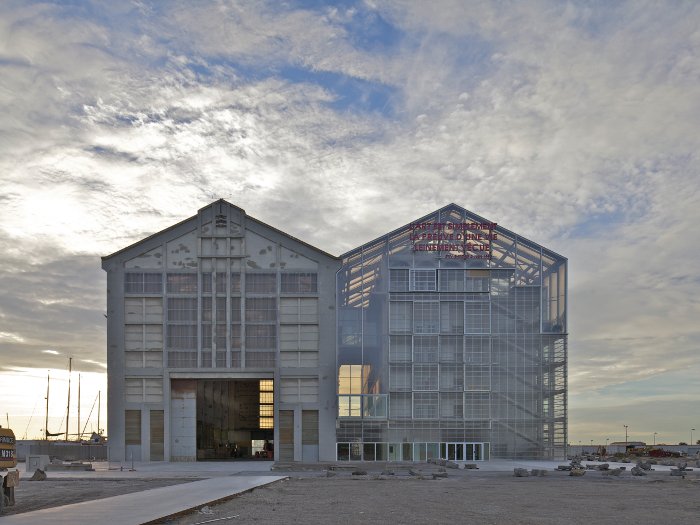 Quel surprise! The new home for one of France’s FRAC art centres realises a wild proposition from Paris-based practice Lacaton & Vassal - a doppelganger volume of a former shipyard hangar in the docklands of Dunkirk

Deep in the docklands of Dunkirk, Parisian architect Lacaton & Vassal has delivered such a stroke of genius that it is literally a double take just looking at the project. The competition brief was to take the vast deserted shell of a ship-repair facility called AP2 and make a new art centre. Lacaton & Vassal was one of 70 practices that took up the challenge. Partner Anne Lacaton says that when they saw the space, their thought was 'it's a pity to sacrifice the volume'. Their big idea: leave it, and build a twin of it alongside to host all the galleries, storage and other functions. No other competition proposal envisioned anything like that. The art centre, home of FRAC Nord-Pas de Calais, opened in November. Two volumes, each 75m long, stand conjoined on a rectangular plan, with parallel pitched roofs and flat facades. Their forms may be as mundane as Monopoly houses but they loom with a magnificent, monstrous scale over their maritime, industrial surroundings. The original volume is the opaque AP2 hangar, opened in 1949. From here, until 1988, shipbuilder Chantiers de France despatched all manner of great vessels. It was long-known locally as 'the cathedral' because of its vastness and profile. A double-height door beside the new east-facing entrance opens directly on to its empty interior, as high as Tate Modern's Turbine Hall - a comparison that immediately came to the architects' minds. Next to it is the new volume, shiny and translucent like a vast greenhouse. This is far from empty. Its internal structure and facades are rational but complex. Greeting visitors from near the new volume's apex are pink neon capital letters, by British artist Scott King, quoting punk pioneer Stiv Bators' proclamation in French: 'Art is merely the evidence of a life wholly lived'. This map locates FRAC in the Grande Large docklands area, and shows how it will be connected by a footbridge to Dunkirk's resort zone Photography Philippe Ruault, Courtesy FRAC Dunkerque

It's a fine thought with which to enter Lacaton & Vassal's new volume. Within it the structure is essentially a concrete frame with a 7.5m grid, creating 9,300 sq m of space over five floors, including an observation level, all enclosed in glass. But around this is an outer envelope, largely made of transparent corrugated polycarbonate mounted on light metal frames. This offers thermal insulation (making it at least 7°C warmer than outside in winter), but it is not airtight (thus avoiding condensation) and is 50 per cent openable. Its separation from the concrete internal volume is 2m on the long north-facing side, and 3m at its narrow east and west ends. The polycarbonate feels a bit temporary on first encounter, perhaps even a little low-budget - it actually costs about €25-€30 (£21-£25) a square metre. In fact, Lacaton & Vassal has used the material in a family house in Bordeaux, the Maison Latapie, as long ago as 1993. After 20 years, Lacaton can testify that 'it does not yellow'. The gap between exterior skin and inner glazing accommodates stairs or is spanned by floor to create passages along the facade. This horizontal extension of contained space recalls Lacaton & Vassal's 2011 work on the Tour Bois le Prêtre (Blueprint 326, May 2013), which boosted the floor space of the Parisian social housing tower by 40%. A cafe installed in the gap between the old and new volumes, Maxime Dufour photographies

Each FRAC floor is different. The ground floor has a cafe along half of the 5m-wide gap between the old and new volumes. Above this an interior pathway runs between them, something planned to integrate into a crucial project scheduled for 2015: a 'passarelle', or raised pedestrian pathway, that will continue east out of the building, jump 111m across a canal and mount the great dyke that protects the docklands from the sea. It will land in Dunkirk's eastern quarter of Malo les Bains, a resort area where the beach stretches east towards the nearby Belgian border. The 300m connection is crucial to make FRAC accessible, and Paris architect Brigit de Cosmi has won its design competition. Light floods through to each floor, naturally illuminating galleries. From up on the north side, the sea below presents a vast vista. On the fourth floor, the envelope's polycarbonate starts to give way to glass. The double-height exhibition area here, stretches across the building's width to a gallery terrace that cantilevers high above the first floor internal pathway, towards the void of AP2. An overhead bridge crane only costs about €200,000 (£170,000), and so a new one was introduced to run on rails the length of AP2's roof, allowing works to be placed on the terrace, for example. Thus the old space retains its previous function of being able to move heavy or bulky objects internally. The new volume is a box of light at night Photography Philippe Ruault, Courtesy FRAC Dunkerque

The fifth floor stretches the full length of the building. This was designed as the observation deck, and under the pitched roof of EFTE (a clear fluorine-based polymer material), is a mezzanine and a wide open platform called the Belvedere. Currently, a walk-in installation for screenings called the H.Box, designed by Didier Fiuza Faustino, is there. Behind it, to the west, the view over the docklands offers a field of industrial forms layered with stretches of water. Lacaton & Vasal's biggest gallery space project was the transformation of the Palais de Tokyo in Paris, starting in 2001. It opened up the vast, raw spaces of a grand 1937 building for a contemporary art venue that was instantly edgier than the Centre Pompidou and soon rivalled its international reputation. Blueprint asked Lacaton what lessons had been brought from there to FRAC Dunkirk. 'What we learned...is to have doubts,' she replied. 'As an architect it is impossible to have certainty. It's a question of having the capacity, the tools and the freedom.' FRAC stands, in French, for regional contemporary art fund, a government initiative started in 1983. Some 23 regions have one, each with their own collections, and this century they have been developing permanent venues for storing and display. Dunkirk now hosts the collection for Pas-de-Calais, France's northernmost region. Financed equally by the state, the region and the city, the building hints at France's largesse for publicly funded cultural citadels, although this project cost only €12m (£10m)to build - less than if the older space had been repurposed and still €1m (£0.8m) under budget. It is not the only new, high-profile cultural venue in Pas-de-Calais - as recently as 2012 the SANAA-designed Louvre-Lens opened (Blueprint 323, February 2013). But in this age of austerity, is France's age of grands projets over? 'For the architects, it's a challenge', admits Lacaton. 'We must defend the idea of public spending.' These sound like easy words, but they do reveal a definite political dimension to the practice's ethos, a quiet passion that would be difficult to find among British practices. It is easily apparent in Lacaton & Vassal's housing projects ('the occupant must be a participant in the process,' she says), which are ongoing. FRAC Pas-de-Calais's collection includes works from legends like Duchamp, Warhol and Judd, and has a €280,000 annual acquisition budget. It has connections with the Turner Contemporary in Margate (interestingly, another seaside venue with pitched roofs and an innovative skin - Chipperfield used acid-etched glass). FRAC's inaugural exhibition, The Future Starts Here, running until April, shows off its big names and includes a fascinating collection of subversive works featuring chairs and a room themed by Matthew Darbyshire. Nowadays, contemporary art institutions increasingly reach out to engage the public, but in the case of FRAC that's been its mission for 30 years. Dunkirk, Lacaton says, was 'very important to us because it's a public collection'. The transparency of the structure spells out an openness to the public, to which Lacaton & Vassal offers the thrill that comes with the sheer audacity of its design.