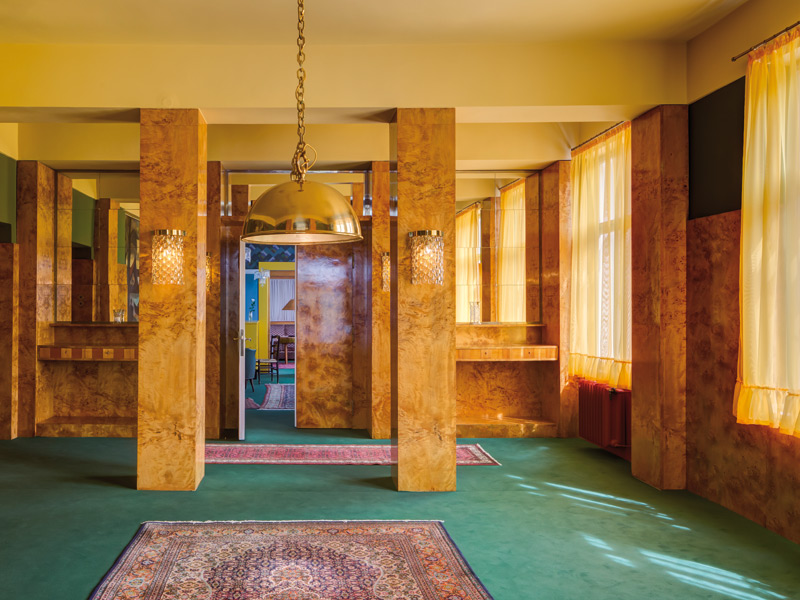 Brno-born architect Adolf Loos was renowned for his modernist interior designs for affluent Austrian and Czech clients. Now, in its year as European Capital of Culture, the city of Pilsen has restored and opened to the public three of the 56 apartment interiors Loos completed in his lifetime. Previously depicted in dingy black-and-white photos, then abandoned and occupied by the Nazis during the Second World War, the apartments have been brought back to their former rich and colourful glory for all to see

The influential modernist architect Adolf Loos completed 56 apartment interiors in his lifetime. Advocating smooth, 'precious' and unadorned surfaces in his essay Ornament and Crime, he created a new way of living for wealthy upper-middle-class (mainly Viennese) clients, a world away from the ostentatious decorations of the Fin de siècle. Yet, describing architecture as no more important than washing dishes and unwilling to even categorise his designs as architecture, Loos was unusually nonplussed to see them photographed in magazines. The black and white photos of the time just didn't do them justice; for Loos, it was the occupation and sensation of being in a space that was important. He created homes to be lived in. 'I am against photographing interiors,' he wrote in an essay, On Thrift, in 1924. 'The results are always different from the original. [...] My interiors cannot be judged from photographs or reproductions. I am sure that in photographs they will look awful, make no impression at all. Photographs dematerialise reality, but precisely what I want is for people in my rooms to feel the materials around them. I want it to have its effect on them. I want them to be aware of the enclosing room, to feel the material, the wood, to see it, touch it, to perceive it sensually, to sit comfortably and feel the contact between the chair and a large area of their peripheral sense of touch, and say: this is sitting as it should be.' Since April, visitors to the Czech city of Pilsen have an opportunity to do just that: immerse themselves in these private worlds. Coinciding with its year as one of the European Capitals of Culture, Pilsen has painstakingly restored three of its eight Loos interiors - the apartments of Josef Vogl, Vilem and Gertruda Kraus, and Jan Brummel (known as the Brummel House) - and opened them to the public. Inspired by the restoration (1997-2000) of one of Loos' most famous projects, Villa Müller in Prague, work started on the Brummel House in 2001. From 2003, Pilsen city government and its historic preservation division assumed care of Vogl, Semler, Weiner and Kraus apartments too. Previous attention has been focused on star Loos projects in Vienna and Prague, but now the spotlight is firmly on Pilsen. Commissioned by affluent Jewish families between 1928 and 1933, these luxurious homes, many abandoned and commandeered by the Nazis during the Second World War, have survived both fascism and then communism, as well as demolition and decay. Now they emerge triumphant - strictly private and off limits earlier - to be seen just as they were meant to be seen. Forget the white-box architecture of modernism: these are impressive, vibrant, theatrical stage sets; a mashing together of colours and textures - rich, highly veined marble against shiny dark mahogany, mirrored surfaces and smatterings of bright primary colours. I don't think Loos would even have minded these photos...

Loos began designing interiors for existing apartments and shops in 1898. His own apartment in Vienna, renovated in 1903 when he was 32, is where he tested out many of the ideas that went on to shape his later designs. There, he positioned a built-in seating nook with a fireplace in an adjoining space to the living room, today preserved in Vienna's Museum Karlsplatz. In the softer, more feminine bedroom for his wife Lina, he draped the walls in white fabric, hiding laquered white cabinets, and covered the floor in a huge, sumptuous rug of white angora fur. Later, such as at the Steiner House in Vienna (1910), Loos developed his concept of the Raumplan, or 'plan of volumes' that placed an emphasis on separate rooms with unique functions, as opposed to the open-plan house of Le Corbusier's Plan Libre.

Rooms, each treated differently, were connected in a sequence by generous openings or doors screened by curtains, while steps and varying ceiling heights were used to frame views and pause the journey through the house. This manifested itself in its strongest form in his split-level projects, Moller House in Vienna (1928) and the Villa Müller in Prague (1930).

Loos' interiors are inward-looking spaces; detached from the outside world, windows were opaque or draped with curtains. Furniture is positioned looking into the room, with built-in seating turning its backs to windows. He used polished wood or marble wall panelling with built-in cupboards, bookshelves, sideboards and upholstered seating to create a sense of intimacy, emphasised by the strips of single-colour wallpaper or cornices that visually reduced the ceiling height. Mirrors were strategically placed in alcoves and high above vitrines to create optical illusions, fragmenting and extending spaces. After the First World War, Loos became chief architect to the Housing Department of Vienna (1920-1922), where he concentrated on economical mass housing schemes. Later, during a brief sojourn to Paris (1924-1928), on the invitation of Dadaist poet Tristan Tzara (for whom he designed a house in 1925), he designed a home (unbuilt) for dancer Josephine Baker. The flat-roofed building, wrapped in a black and white banded facade, had a double-height swimming pool at its centre. On the first floor, porthole windows were designed to allow voyeuristic glimpses of swimmers. Loos returned to Vienna penniless in 1928, with several unbuilt designs, became embroiled in a paedophilia scandal and died in 1933, aged 63. While Loos is remembered as a modernist architect and polemic writer, for him these interior projects weren't architecture at all. In his journal Das Andere (The Other) of 1903 he wrote: 'They are kind enough to describe my work in Vienna so far as 'architectural'. But, unfortunately it is not [...] Designing apartment interiors has nothing to do with architecture. I have earned my living by it, because it is something I can do. Just like when I was in America I sometimes washed dishes so as to keep body and soul together. [...] And so I designed interiors, and still do. I give advice. If it's a wallpaper you want, then we'll go to Schmidt's at the new market. Do you want plain or striped? You like that one? I'd recommend this one. Some people come to me because they don't know what to do or because they are too busy to do it themselves, others because they don't know where to get the materials. But every one of them ends up with an apartment which suits their individual personality and the life they lead. With one or two design modifications suggested by me.' If it was only that simple, there'd be countless copies. But, while you'll find numerous open-plan white boxes, you won't find so many that could pull off the mix of restraint and luxurious splendour quite like Loos.