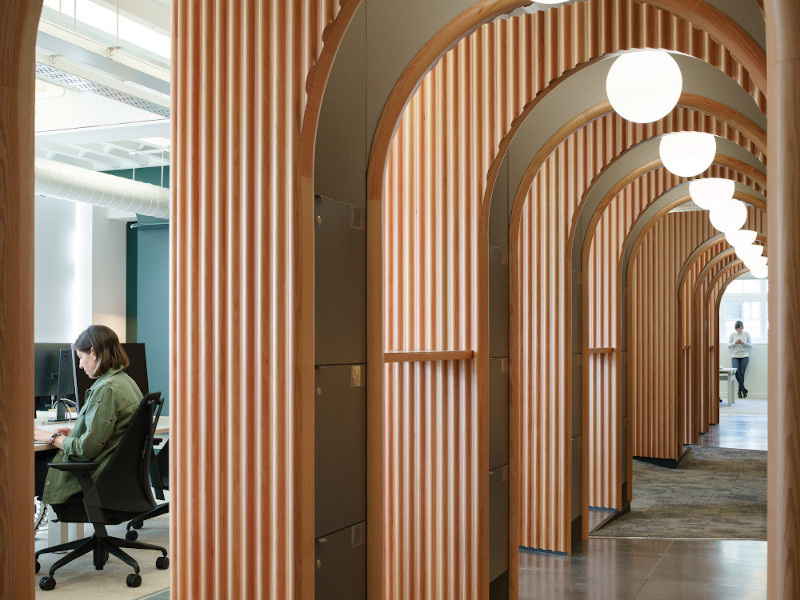 Threefold has completed a third workspace for Airbnb, inspired by a Renaissance painting A man hangs up his shawl in his study. Intriguing objects surround him on shelves, while he sits at his desk to work, composed and concentrated. This man of knowledge is not detached from the world: where he sits is a scene within a scene, a space within a bigger space. Beyond his raised platform, anointed with light, is a larger space, its ceilings vaulted, elegant arches denoting shaded passageways. We can see him working, but we do not intrude on his space – he is at work, and we are on our way elsewhere.

A woman sits down to work. On a raised platform she finds a desk; she can see out to where children play outside, while adjacent to her secluded nook there is an open space, where her colleagues walk, meet and consult each other on matters before settling down in a space of their own. We can see her from where we stand, sheltered in the stoa, and although we stop to reflect, we soon turn down a cloistered passageway, on our way to elsewhere. Who are these two workers? The first is the fourth-century scholar and monk St. Jerome, as pictured in Antonello da Messina’s painting, St Jerome in his Study; the second is a worker at Airbnb’sLondon office. An unlikely pair, but in Antonello’s painting Matt Driscoll of Threefold Architects found the landscape of open-plan and intimate spaces surprisingly well-suited to meet the needs of a contemporary workplace – such as that of Threefold’s client Airbnb. For a space somewhat more modest than St. Jerome’s study, the new offices fit 70 desks, 10 meeting rooms, two break-out areas and a number of secluded kiosks, while taking the painting’s landscape of raised platforms, elegant colonnades, and the rhythm of secluded contemplative spaces and open areas, and transplanting them into the 21st century. The design is focused around an intervention in the space, as has been the case on a number of Threefold’s projects, such as one for Pocket Living, as well as an earlier project for Airbnb’s upstairs space, designed around ‘abstracted elements of a village – the village green, a library...’ Driscoll explains. The intervention here is the ‘stoa’, which wraps around the core of the office, forming a circulation route. Driscoll explains: ‘In classical architecture the original flexible function space is the Roman forum – which is an open external courtyard space, which you can use for all sorts of activities – and then the cloistered stoa: the enclosure that surrounds it ... which is a space for orientation, circulation, shelter, closure – we just quite like that duality.’

The stoa’s traditional columns are replaced here with a sine wave form – its curves alternately opening out into the main space, and creating small enclosures with lockers and coat hooks for employees. Crucially, this and the other more unusual spaces of the office have been designed with proportions suitable for wheelchair users to have full access.

The stoa has a reeded profile of Douglas Fir – a detail inspired by Doric columns – which helps to break up airborne sound. (Further acoustic insulation is incorporated discreetly into the stoa’s inner walls.) The complexities of the design were solved in close collaboration with the Northamptonshire-based firm NH Joinery, whom Driscoll describes as ‘excellent to work with’ and ‘central to the successful delivery of this key element’. Starting from Threefold’s own detailed set of drawings Driscoll recounts how ‘we worked very hard on the radiuses to make sure that we are minimising the number of different profiles’. Threefold then spent a lot of time in NH Joinery’s workshop producing 1:1 drawings and samples.

The stoa also functions as a ‘landing point’ for employees entering the office: from there the employee can choose where to work for the day from a range of open and secluded spaces. The stoa itself contains places to work: it has ledges-cum-standing-desks suitable for perching with a laptop or just chatting with a colleague. Also hidden in the stoa are the entrances to small rooms – designed specifically for the Skype meetings through which a lot of Airbnb’s business gets done. There is only a kitchenette area on this floor as Airbnb wants to make use of the communal kitchen upstairs. As such, it fits within the stoa, but here it takes the form of the cloister and flips it – with upended archways the curve is at the bottom rather than the top.

The colour palette is also inspired by that of the Antonello painting, with pale greens and deep greens for surfaces and the tan/yellow hue of the stone replaced with the Douglas Fir for the stoa. While there is bespoke joinery throughout, standardisation of furniture across the Airbnb offices worldwide means that sit-stand desks and task chairs are all provided by Herman Miller, although the desks do feature a custom top to fit in with the interior theme. As for lighting, Driscoll explains they’ve gone for varied lux levels throughout: ‘I don’t necessarily agree with guidelines on a kind of blanket lux levels everywhere... I’m much more interested in keeping pockets of different types of lighting.’ The ability to pursue this unique concept was enabled by the openness and ambition of Airbnb’s Environments team, headed up by Aaron Taylor Harvey in San Francisco, who Threefold has worked with previously: on the initial third-floor space Airbnb took on for its London office, and a smaller project downstairs. Driscoll is very complimentary of the team: ‘They bring to the project a huge wealth of knowledge every time, with their dealing with designing workspaces for their teams across the globe.’

Although completed in just six months, the ambitious project has been well-executed. When I ask Driscoll what he’d change, he says: ‘The only thing I don’t like are the screens... this sea of black.’ This, admittedly, would seem out of place in St Jerome’s study.