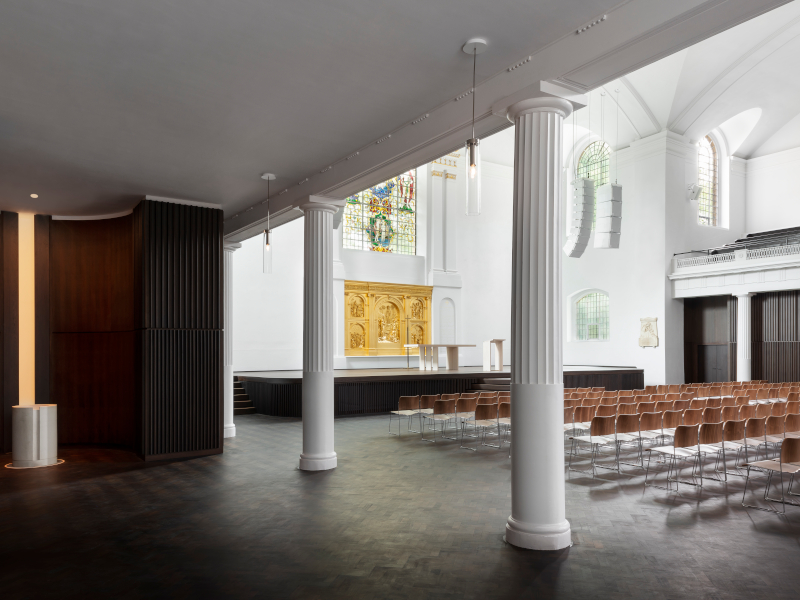 TF&P was initially appointed in 2015, but a second phase of the project brought the architects together with John Pawson, with TF&P continuing as architects for both internal and external matters, and as contract administrators for the site stage. While John Pawson produced the concepts for the main interior space and entrance, TF&P were responsible for the detailed design throughout, as well as the conservation and repair of existing fabric – an unusual situation that evolved into a great collaboration, says Clive England, partner at TF&P.

The church was designed by James Spiller in 1792, with a tower and porticos added a few decades later. Though the building is Grade-II listed, a devastating fire in the 1950s caused the roof to cave in and destroyed a number of the church’s original features. 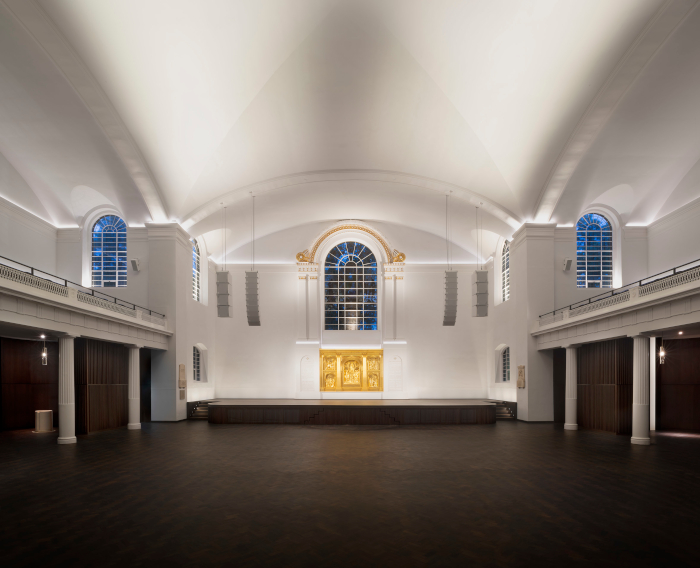 There were specific challenges to the church’s restoration: the roof damage was significant, requiring extensive repair and reinforcement from above by specialists. It was also found that the large church organ – a replacement after the fire – was too heavy for the west gallery that supported it, necessitating ‘intricate structural interventions’, England explains.

The South Wing, meanwhile, containing ancillary spaces for the running of the church, ‘was a random collection of ad hoc floors, mezzanines and partitions’, England says, which was ‘very inefficient in its use of space and wholly inadequate in terms of means of escape and fire separation’. This has now been replaced with a more efficient offering of parish and community accommodation, including offices, multi-use rooms, toilets, showers and kitchen, with access provided by new stairs and a lift. 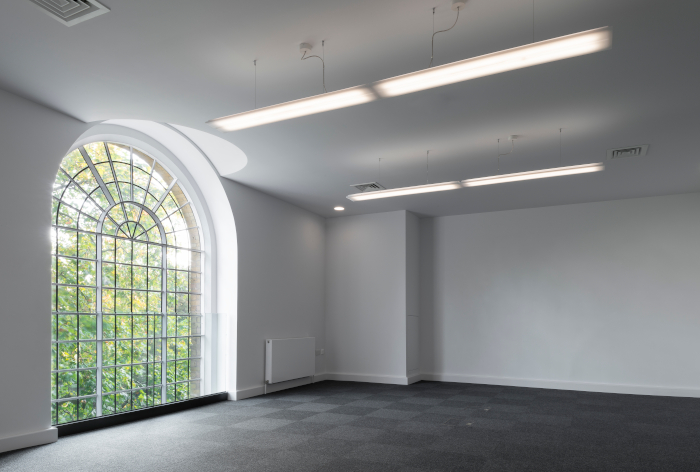 The south wing has been renovated to include meeting rooms, catering facilities and office space

Internally, ground-floor partitions dating to the post-fire restoration were removed, restoring the original Greek Cross layout of the original church, with its square central section and four extensions of equal size. Gone too is that era’s Festival of Britain-style colour scheme, with columns painted teal and other elements in red; all of these are now white.

The result is an interior that is closer to its original 18th century design than it has been since the fire, England notes. But it is still a distinctly modern take on the original, with the absence of elements lost providing the opportunity for the minimalist treatment that is Pawson’s signature. This is the designer’s first church project in the UK, but he previously completed the restoration of St Moritz church in Augsburg, Germany, also damaged by fire and bombing, with an even more minimal design. 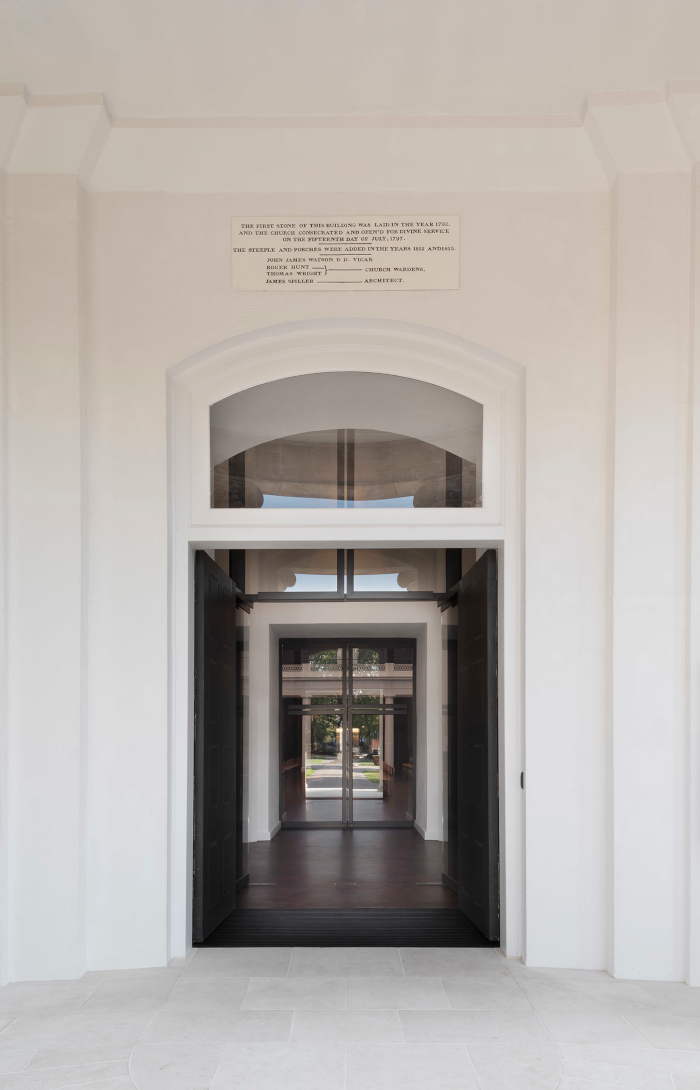 The entrance to the church has been updated with wheelchair ramps

The newly painted white of the dome is contrasted with dark-stained oak joinery covering the walls on three sides of the nave, while on the fourth, eastern, side, is a new sanctuary that doubles as a stage. The joinery was coloured to match a war memorial within the church and the original surviving Georgian pews, while its fluting detail echoes that of the structural columns supporting the gallery. Against these contrasts of light and dark, the gold of the reredos and organ shine brightly.

‘As a critical aspect of the design, new architectural elements – distinct from the existing fabric of the church interior, but relating to the existing timber pews and organ – are used to define the different spaces and functions’, Pawson comments. Two new minimalist chapels sit on either side of the nave, one containing a new font designed by Pawson, who also designed a new altar, lectern and processional cross. There are also custom-designed transparent glass pendants – a collaboration between Pawson and Italian supplier Wonderglass.

These pared-back elements hide storage for the nave’s free-standing seating, while the church’s simple and clean interior conceals a vast amount of cabling associated with the sophisticated lighting, sound, heating, CCTV, and security systems – which England describes as ‘probably the most that I have seen on any similar project.’ Large downlighters within the ceiling were also replaced with more discreet uplighting around the dome’s perimeter.

The project was part-funded by the National Lottery Heritage Fund, (for just over £2m); part by funds raised by donations from the congregation; and also by a Section 106 agreement for the land that used to be the rectory garden. This separate scheme, by DLA Architects for developer Thornsett, offers 58 new flats, in addition to the new rectory, community hall and the church’s offices.

A central part of the brief, also linked to the church’s revenue plan, was the use of the building as a multifunctional space for worship, culture, music and the arts. This gives a bigger picture of what the church is today: having long offered more than a Sunday service, it hosted the memorial for Prince Philip earlier this year, civic events such as the Borough of Hackney’s Remembrance Sunday service, and community services including a food bank and a knife amnesty.

The church is also well established as a music venue, with the likes of Coldplay, Florence Welch, Jamie XX and Emeli Sandé taking the stage in recent years. But until recently, explains the church’s head of spaces, Zac Lloyd, equipment needed to be brought in every time. Now the church has been rewired and given high-quality AV and lighting provisions, as well as a state-of-the-art d&b PA system above the stage – in white to blend with the design. This is supported by the sound desk flanked by two bars at the back; the latter is ‘where you get your coffee at church, or a pint if you're here for a gig’, Lloyd says.

Explaining how the space supports these different functions, Lloyd says: ‘We were always clear that it needed to work first and foremost for church services on Sundays, but also […] a huge part of the work was establishing the building as a seven-day-a-week venue, basically, that we could use for community events.’

Everything the church does is united under an award-winning (and very east London) identity designed by local studio OMSE, rebranding the church as ‘SAINT’. SAINT now encompasses a group of five churches across east London led by Reverend Al Gordon, which first came together during the restoration process, when the congregation moved temporarily to join nearby St Luke’s, ‘and it worked so well that we decided to merge or partner with each other, then gradually three other churches in Leyton, West Ham and Shoreditch joined in’, Lloyd explains.

SAINT’s identity combines the rounded arch of the church’s windows with a cross symbol, but the logo can also be adapted to other elements of the church’s activities, such as making honey (on its roof) or brewing via the Hackney Church Brew Co. A link to the physical space is managed through the notice boards and churchyard signage designed by architecture studio EBBA and production agency Family.

SAINT reflects that the project has ‘improved the access to a much-loved community heritage asset and created a breathtaking cathedral of creativity to be enjoyed for generations to come.’ The artful mix of old and new, the expertise of specialists and the contemporary high-profile contributors – including set-designer Es Devlin, who has created an interactive installation inside the entrance – certainly celebrates the various strands of creativity of its making, as well as offering a beautiful, multifunctional space to its congregation and other visitors.