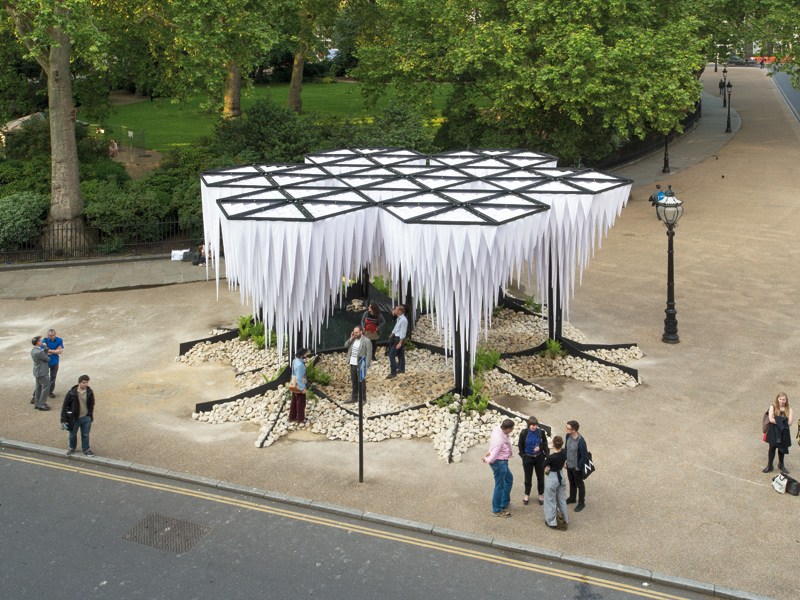 Temporary architecture has been appearing and disappearing more and more in urban public spaces. Many such structures have been branded ‘pop-ups’, follies to provide a moment of light entertainment and camera-ready delight. But there is a long history of a more holistic type of temporary architecture that subtly suggests how we could live, work and play more harmoniously. Here we feature an extract from Cate St Hill’s new book, published by the RIBA, including interviews with 13 exciting, young, socially minded architects, designers and multidisciplinary collectives, making and building their own way.

Temporary architecture has been getting a bit of stick in recent years. It's often been misrepresented as a flimsy trend, fuelled by a frenzy of 'meanwhile' projects following downturns in construction activity and developers cashing in to avoid longer term problems and difficult questions. It's been seen as a photo-ready quick fix: easy, entertaining and, often mistakenly, cheap -- a marketing ploy to attract investment in an area and show the world it's 'hip'. It is now synonymous with shipping containers, street food and music festivals, and that advertising buzzword 'pop-up'. Multidisciplinary collectives such as Turner-prize winning Assemble are helping to redefine the role of the architect. Photo Credit: Assemble

But there is a long history, continuing today, of a more holistic temporary architecture that deals with fundamental questions of how we might live, work and play more harmoniously together. These structures, situations and events quickly appear and disappear, but they are designed to invest and embed themselves in a community, public space or set of ideas. They open up possibilities, test scenarios and subvert preconceptions of what our cities should be like and how we should behave in them. Their architects and designers, often young, are pushing the boundaries of architecture and taking the city back into their own hands. What can we define as temporary architecture? And is it anything new? Temporary architecture in the context of this book can be labelled as purposely short-lived structures, exhibitions and programmes that create experimental sites for interaction and engagement. They can range from a tiny travelling theatre and floating cinema to a community lido on an abandoned railway site or a haphazard theatre made entirely from scrap material. Many are self-initiated, involving do-it-yourself building and grass-roots platforms for collective, participatory design. Usually, they're experimental and innovative, questioning the form of permanent architecture gone before. Always, they're for public use and involve the public as key protagonists in their formation and performance. If we take temporary architecture to be something that is not permanent, then it has been around in one form or another since time immemorial, from prehistoric wooden huts and shelters, through medieval stage sets, circuses and world fairs, to the mobile home and post-war prefabs, and wartime and disaster relief. In contemporary architecture we are more familiar with temporary exhibitions and pavilions: Mies van der Rohe's Barcelona Pavilion (1929) for example or Alison and Peter Smithson's House of the Future for the Daily Mail Ideal Home Exhibition in London (1956) -- prototypes for modern living that showed their creators' provocative ideas on the future of architecture and urbanism. They were also about transforming architectural forms into compelling, memorable visual images -- a form of advertisement. These concepts and ideas about rethinking society, seen in these pavilions, are similar in many ways to the temporary structures being built today. They're about building alternative possible worlds, not entirely real, not entirely fictional. Yet the structures popping up today and in the book are also somehow different: they're not prescribing or dictating specific ways to live in the future; nor are they necessarily prototypes to be repeated on a grander scale. Instead, each is a unique (and sometimes bizarre), rule-breaking structure, a vehicle for playing with thoughts and ideas -- and it is these thoughts and ideas, and often not the physical thing itself, that could be seen to have the biggest impact. These projects have the ability to catalyse subtler and wider-ranging effects, as shown for instance by The Decorators' project for Chrisp Street Market. That scheme, which involved setting up a 'Town Team' to meet regularly, as well as more tangible changes such as new market furniture, has gone on to act as a pilot for two other attention starved London markets in need of rejuvenation. These architects are making studied responses to contemporary lifestyles and changing cityscapes, and in the process they're causing a subtle yet profound shift within the architecture profession. In these cases, the role of the architect is expanding to include storyteller, historian, urban planner, psychologist, facilitator and communicator. Collaborations are further blurring these boundaries between disciplines. Neither is it always necessary to go through the traditional rigmarole of architectural education any more, as practices such as Assemble, EXYZT and Practice Architecture attest to. The Decorators' project involved a variety of initiatives to emphasise Poplar market as a public and civic space, including a boxing match. Photo Credit: Philipp Ebeling

The book features 13 interviews with 13 such architects and designers, ranging widely from the more traditional small architecture practices and studios to multidisciplinary collectives and cross-discipline designers, spread across the world from New York and Santiago to London, Berlin and Zürich. All have started their own offices and continue to work on their own terms. Each has, in his or her own way, inspired new definitions of architecture, not just in terms of their physical outcomes, but also in the way that they go about creating them. What they all have in common, apart from being relatively young in architectural terms and infectiously passionate about their craft, is a concern for engaging people, enriching local communities and empowering ways to create animated places in disused, inaccessible parts of the city. These architects aren't daydreamers: they're making extraordinary things happen. With temporary architecture, as EXYZT says, 'everybody can be the architects of our world'. Ridley's was a selfsufficient restaurant co-existing with the market, the traders and its neighbours. Photo Credit: The Decorators

Temporary architecture isn't purely pop-ups and pretty pavilions, disappearing as quickly as they appear; it can also be something far subtler, involving a wide range of participants and stakeholders working together with deeper social ambitions for our shared public spaces. The Decorators is a London-based interdisciplinary group of practitioners set up in 2010 by landscape architect Suzanne O'Connell, interior designer Xavi Llarch Font, architect Mariana Pestana and psychologist Carolina Caicedo. It likes to design experiences that invite people to engage with objects and architecture, from a temporary restaurant in Hackney to a programme of community events at Chrisp Street Market in Poplar. How did you start The Decorators?

Suzanne O'Connell: We're all from different backgrounds and studied Narrative Environments together at Central Saint Martins. The course is about broadening the expanse of how public space should be designed to bring together a range of practitioners. It had a very strong emphasis on collaboration.

Where did the name The Decorators come from?

Mariana Pestana: Decoration is usually seen as a minor form of spatial design, just like the temporary is seen as second architecture. The figure of the architect is still a very distant one to the general public, whereas the decorator is somehow more accessible. We like being embedded in our projects and having an on-site presence. Ridley's was a temporary restaurant created on Ridley Road Market in collaboration with Atelier ChanChan in 2011. Photo Credit: DOSFOTOS

Can you tell me about your work at Chrisp Street Market in Poplar in 2013?

MP: Chrisp Street was a research project. We understood that the market had an important economic presence in the area, but that it had also -- and perhaps foremost -- a cultural relevance. We wanted to emphasise that and ask, 'What if the market wasn't only a place to shop but also a civic space?' We created a radio show and ran a series of debates and events with local cultural institutions about the future of the market. The project wasn't a solution, it was much more of an enquiry. Our recommendations are now being taken by Poplar HARCA and informing its application for a new round of funding. Diners sat at a communal table high above the market. Photo Credit: DOSFOTOS