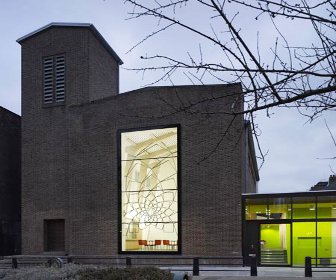 Theis & Khan was earlier selected by Wanstead United Reformed Church for the remodeling scheme. The scheme involves raising the floors of the church and neighbouring hall to bring them to one level, adding a new kitchen and accessible toilet, and installing sliding and fixed glazed screens between the narthex and nave to ensure separate usage. Construction of a new staircase and lift to allow universal access to the church’s gallery level is also included in the plans.

Originally designed by architect John Johnson, the Wanstead United Reformed Church was unveiled in 1861 in King’s Cross. But five years later, due to the extension of the Midland Railway line, the neo-gothic church was relocated to Wanstead by moving it brick-by-brick from King’s Cross.

The main objective behind Theis & Khan’s scheme is to transform the church building into an engaging modern place of worship for both existing church members and the broader local community. Approval from Waltham Forest Council is expected in January 2011, and work is expected to start by July 2011. The commission marks the second church project for the practice, following its critically acclaimed Lumen in Bloomsbury.