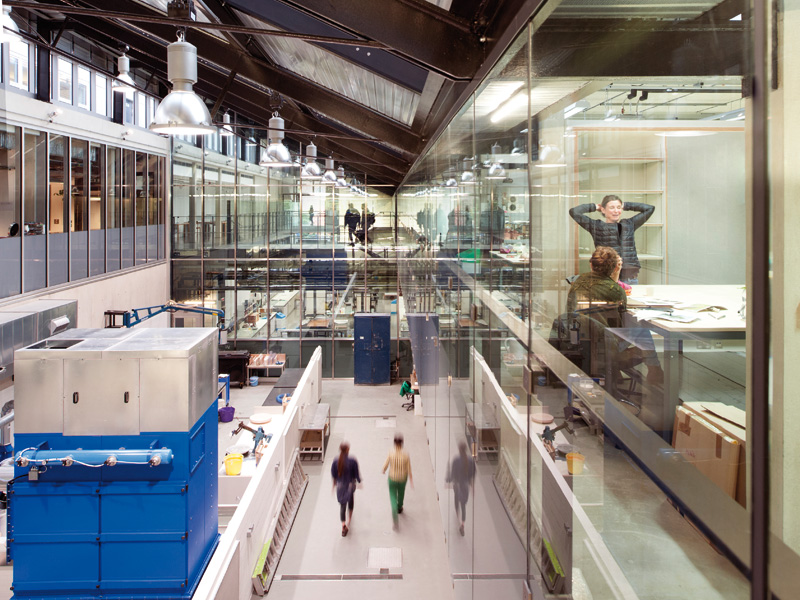 The third of three works by Stirling Prize winner Haworth Tompkins for the RCA, the four-storey Woo Building, opened last autumn. It is home to the Ceramics & Glass and Metalwork & Jewellery departments, and is tucked into the L-shaped plan of the Dyson Building (2012) housing photography and print, and adjacent to the two-storey Sackler Building (2011), which houses painting. The tight complex follows Haworth Tompkins' competition win in 2007, when it submitted a book of ideas about how the RCA should work.

The Woo Building has an industrial feel, in activity, materials and appearance. Its roof even cuts a sawtooth profile, with chimney-like ventilation flues.The practice's founding partner Graham Haworth cites various functional buildings as inspirations, from Owen Williams' 1932 Boots D10 pharmaceutical factory, with which it shares airy skylit-overlooked spaces, to Steven Holl's University of Iowa School of Arts (2006), with its 'hybrid instrument' approach, horizontality and glass partitioning that reveals activity. These references apply to the Dyson Building too. Haworth adds that the 'interiors also reference the "supernormal" of the provisional industrial space favoured by designers such as Comme des Garçons'. The Woo rises behind the Sackler, with the World's End Estate, by Eric Lyons and Cadbury-Brown, and C Howard Crane's Earls Court Exhibition Hall (in demolition) behind. Image: Philip Vile

The Woo's structure is basically a concrete volume with steel upper floors. The ground floor hosts the rectangular atrium Machine Hall, a process space shopfloor occupied by Ceramics & Glass, overlooked by workshops and offices. This is an extension of the Dyson's atrium, from which it is separated by a glass curtain wall that screens noise and dust and is a fire barrier.

Workshops on the east side occupy the space between it and a narrow courtyard that separates the Woo from the Sackler. Above the workshops on the first floor are workspaces housing more industrial kit such as kilns, and a glaze room (as project architect Ken Okonkwo comments: 'It's where the alchemy happens'). Jewellery & Metal take over from the second floor, with compartmentalised spaces for activities such as hammering and enamelling.

Under the sawtooth roof (on which PV panels are to be installed), the third floor houses an open area of bespoke jewellery workbenches into which wooden offshoots for soldering can be slotted. Nearby is the Time Based Studio for wearables that work on a timeline -- Professor Hans Stoler says the RCA is 'exploring materiality and smart materials, and the digital'. The room exhibits works and is used for crits.

With its concrete, steel, glass and black paint, the Woo's palette is austerely neutral. It reflects advice that Jim Cadbury-Brown, architect of the RCA's central Darwin Building (1964) in Kensington, offered to Haworth Tomkins: 'Money should be spent on space rather than finishes -- as a place where art is in a continual process of being made, the interior especially should be plain, and one of its principal functions should be to act as a background to art and not assert itself as an "art thing".' Even so, there is a wonderful play of textures in the back stairs, where the concrete-aggregate staircase touches the frame's ubiquitous smooth concrete. That was actually a mistake by the contractor, but Haworth admits that 'sometimes accidents like this result in a more interesting visual solution'.

There is one element that emerges from the main volume - the second-floor Gateway Studio. This occupies a steel cantilever that frames the southern Howie Street entrance into the courtyard. The black Vierendeel truss virtually touches the Sackler Building, but the gap is so narrow that most would not notice. Haworth cites weathering and maintenance as issues behind the lack of gap.

Below it is a sturdy gate, designed by RCA alumnus Max Lamb, with metallic blue anodised aluminium diagonals. Only here does the Woo splash any colour.

Unlike the narrow old 10-storey Darwin Building, Okonkwo says the Woo gives 'connectivity between departments, and it's more horizontal'. And its adaptable, open spaces and robust structure should make it future-proof. The Woo may not look like art, but it is a true art factory.