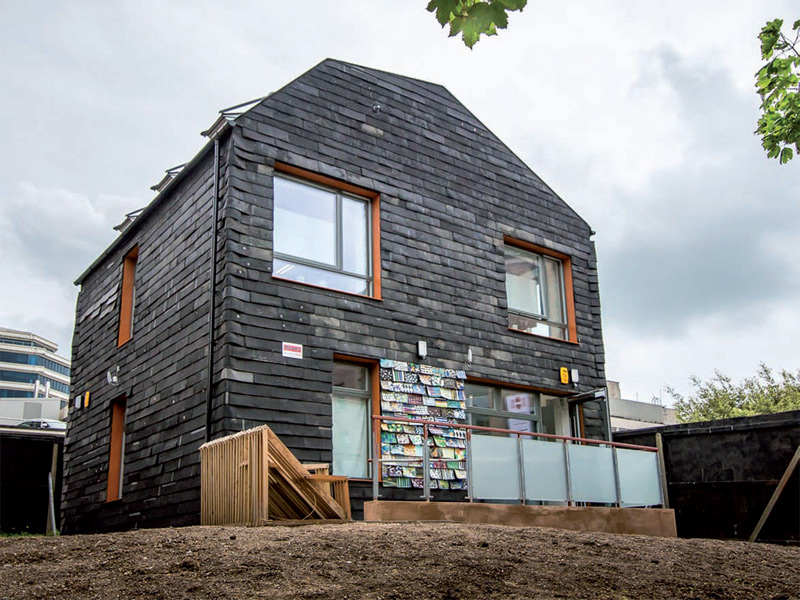 Summer holidays are the ideal time for venturing out of your usual geographic comfort zone in search of inspiration. But, rather than some glorious island retreat or coastal resort, one of the most inspirational excursions of my summer was to Brighton, to visit the Waste House.

The Waste House is - as its name suggests - almost entirely made of waste. It sits just behind the University of Brighton's College of Arts and Humanities building in the centre of town. Handsomely clad in black carpet tiles (21st-century eco-shingle?), this spacious, two-storey structure could function happily as a home, but for now it remains a multifunctional research and events space for the university and a built-environment ambassador for a more sustainable kind of construction. Lest we (the massed ranks of designers and architects who read this magazine) forget, the architectural construction industry is responsible for 45 per cent of all carbon dioxide emissions in the UK.

Not this particular beauty however. Its components are 85 per cent rubbish. They include discarded bricks, ply sheets and off-cuts of timber, as well as old vinyl banners (the kind that are usually tied to street lamps during festivals), which are being used as internal vapour-control layers. Also stuffed inside various cavity walls are floppy disks, DVDs, video cassettes and the legs of denim jeans donated by a company that imports second-rate jeans from Asia and then slices their legs off to make denim shorts; the legs used here have been spared a life as landfill. Each unlikely insulation component is being assessed for its insulation properties by a PhD student from the Faculty of Science and Engineering.

Up a staircase made of compressed recycled paper bricks, is an airy first-floor kitchen and study space, with all the roof beams plus the pipes necessary to operate the house's heat exchange and ventilation systems visible - this house is, after all, a showcase for sustainable construction. Every mismatched beam and plank is exposed. Acting as a banister and barrier to the staircase is the heat-absorbing (and emanating) core of the house: a rammed chalk wall made of 10 tonnes of chalk waste and 10 per cent of clay.

None of this Waste House would have happened without two key figures - Duncan Baker-Brown, an architect and researcher with the College of Arts and Humanities, and Cat Fletcher, self-styled 'resource goddess' and doyenne of Brighton's 'freegle' re-use facility, as well as creator of the new City Waste Depot. If anyone is chucking anything out, they contact Fletcher. When Baker-Brown - who had been trying to find the cash and a place to build this project for five years - was finally given this site by the dean of the university, he could only go ahead because Fletcher could guarantee enough of the right kind of 'rubbish' to make and fill it.

Says Fletcher: 'Instead of using construction materials I asked if we could do it with general household waste. It's really problematic that there's stuff that people can't recycle. Video tapes, for example, use four types of plastic and are very intricately made. It's very difficult for them to be recycled. We calculated that there's one million videotapes in Brighton and Hove just sitting on peoples' shelves. There was one factory in the UK that could recycle them. It's closed down now.' Hopefully, the video cassettes are proving their worth as insulation material.

Kitchen units being stripped out of a nearby house were offered up to the Waste House. Chairs were mostly salvaged from skips (including two Eames reproductions spotted by Fletcher). The north-facing roof comprises reclaimed square concrete blocks that act as thermal mass, covered in a zero-waste rubber sheeting made from 80 per cent recycled car tyres. The south-facing roof is bristling with solar panels, which produce 30 per cent more energy than the house uses. The floor is MDF panels, all off-cuts from a local factory. In Brighton's Waste House the staircase is made of compressed recycled paper bricks.

Says Fletcher: 'The only elements that aren't reused are the windows and frames.' But the company they sourced them from uses sustainable and durable materials and takes them back at the end of their life for reuse. On a hot summer day, the house is super snug.

Says Fletcher: 'This house is 100 per cent airtight. That's very rare. We have a AAA rating.' The Waste House has already won two RIBA awards and has been earmarked for a special Stirling Prize. And there is growing support from the construction industry, including Wilmott Dixon, MEARS and Kingfisher (which owns B&Q, Screwfix, and apparently every plumbing supplier in Europe). But its legacy is assured in the hearts and minds of Brighton's young people: more than 300 of them - students mainly studying construction trades, architecture and design - put the building together during its year-long build. In addition, during that time, it was visited by some 750 pupils from local primary, secondary and tertiary colleges. Since 2014, the house has been used to help deliver an MA in Sustainable Design.

But the reuse and upcycle bandwagon doesn't stop here. Fletcher and Brighton City Council are key supporters of a bold new initiative imported from Australia to encourage people to reuse and recycle their rubbish. The Garage Sale Trail (GST), the UK version of which kicked off in September, aims to change wasteful patterns of consumption by providing a platform for cities or neighbourhoods to host a massive garage sale on the same day. Free to sellers, they can flag up all their items on the GST website, as an aid to those in search of specific treasure, from Star Wars memorabilia to furnishings for a new home.

Andrew Dick, leader of the UK scheme, hopes the GST will not only encourage reuse but also 'enable new neighbourly connections, provide a platform for fundraising, inspire creativity and stimulate local economies'. Brighton, Hackney and Todmorden in Yorkshire led the pilot. Through inspirational platforms such as these, maybe reuse and recycling can truly become a mainstream and lasting trend for design and construction.