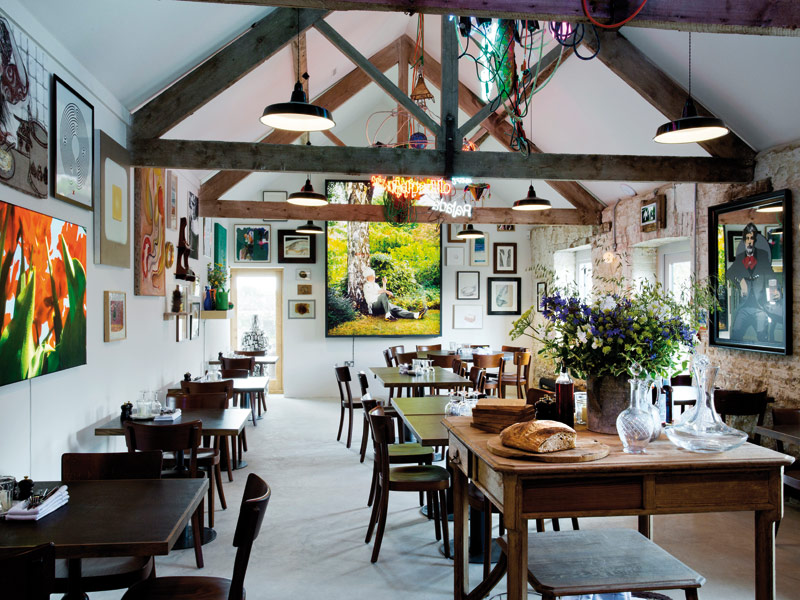 New arts venues are providing gathering spaces with round the clock connectivity for culture, entertainment and socialising

As the quality and quantity of home entertainment possibilities expands exponentially, people are - almost perversely - being seized with the urge to switch off their screens and get out to engage with other people.

And nowhere is this more evident than in the growing number of multifaceted arts venues that offer their visitors a fascinating smorgasbord of cultural treats.

Could it be that the cultural/social hub will be to the 21st century what the shopping centre became in the latter half of the 20th? After all, who needs to trudge along an endless parade of identity-kit retailers when all you want or need can be accessed from wherever you are, thanks to smartphone ubiquity. The intellectually curious want something a little fresher, a little more unexpected and original; a venue that offers in reality what Facebook promises virtually: an interesting mix of people who share your interests, while throwing in the possibility of some serendipitious encounters. Real social networking, not virtual.

Rune Grasdal, of Scandinavian starchitects Snøhetta, agrees the shopping centre's days may be numbered: 'Simply going into a shop and buying something is not a social activity,' he says. And social encounter is what the people of Umeå wanted in their gleaming new Väven Cultural Centre, created by Snøhetta and White Arkitekter; instead of consuming culture, they wanted to create it.

It has cinemas, cafes, conference centre and theatres, yes, but its primary space is a library across the third and fourth floors, a library with a difference. Says Grasdal: 'It's a mix of old tech [books] and new tech - robots for automatic book storage, for example. Inside there are places where you can sit and read the papers, there are exhibitions, you can listen to music, do workshops where you paint and make music and recordings. I have been there a few times since the opening, and it's always crowded.'

That urge to be active participants in culture is also writ large in the programming of Home, a new contemporary arts centre in Manchester and billed as a 'mini Barbican for the North'. Like that early Eighties' concrete colossus, Home has cinemas, theatres, an art gallery, and various scenic spaces for gathering, eating and drinking. Unlike the Barbican, it is all housed in one incredibly compact, 6,000 sq m package.

Architecture practice Mecanoo was at first given an even smaller footprint - 40 per cent smaller - than the one the building now occupies. Says architect Francesco Veenstra: 'We would have ended up with a four to six-storey cultural building. That's not ideal. Bringing visitors up to 20m-plus high floor level would create a lot of wasted circulation space.' Instead, Mecanoo negotiated with the site's developer Ask and secured a larger, albeit triangular, plot, which posed opportunities as well as challenges. Says Veenstra: 'The main focus was trying to fit rectangular spaces within a triangular volume. New cinemas at the Barbican, London

It gave us some very interesting leftover areas, which define the public space to create really strong bars, foyers and restaurants.'

Great social connectivity at Home, opened in May, is crucial for the two cultural organisations that form its artistic backbone - grassroots community engagement has long been the primary focus for the Library Theatre Company, while the Cornerhouse, a multi-screen independent cinema and gallery, has always punched above its weight in its food offer.

'That aspect of the social cultural hub is really important to Home,' says Veenstra. 'It is very much driven by the people behind it. As a practice with experience in cultural developments throughout the world, we believe that these cultural activities really boost up a community.'

For evidence look at the extraordinary work of Brazil's SESC, a social welfare institution dedicated to enhancing quality of life, community and opportunities through the provision of public cultural centres. These offer a huge range of activities from chess to sport to theatre, dance and art, for all demographics and at hardly any cost to the user - and always with great food and social spaces.

Begun as a philanthropic movement by entrepreneurs in the Sixties, SESC is now present in every major city. Its most famous building, Lina Bo Bardi's SESC Pompeia, reanimated an old factory in São Paolo and has become a benchmark of its kind, not least for its skillful weaving of drama and connection between people, activities and the surrounding city at every opportunity.

It's that kind of pervasive animation and permeability that Mecanoo hopes to achieve in Home, and what some of the UK's most venerable cultural institutions seek to attain through ambitious refurbishments.

In London, the National Theatre has been undergoing major work to reanimate its interior spaces and make its activities and attractions far more visible to the crowds that promenade past its terraces along the revived Thames riverfront. Haworth Tompkins has the delicate business of resculpting a London icon, mindful of the best intentions of its original architect Denys Lasdun. Says Paddy Dillon, associate director: 'Lasdun...was incredibly interested in how private space bonded and linked through to public space; how [the building] was connected as part of the city. He said people are supposed to flow in and out of it. Over the years those connections have become blocked up and that's what we have been trying to clear - most obviously by a new entrance that really makes an easy, direct link to the building.'

Transparency and legibility characterise these new schemes - the activity inside the building being broadcast both within and beyond its walls, through careful positioning of social and interstitial spaces along glazed exterior walls. Nowhere does this work better than in the NT's near neighbour - the Royal Festival Hall, which now makes full use of its subtle but inspired 2007 refurbishment by Allies and Morrison to programme multi-arts events that make maximum use of its vast social spaces.

But what can you do when existing buildings are barricaded in behind their own listed concrete fortress walls, as with the Barbican, one of Europe's foremost multi-arts centres?

In 2006, Allford Hall Monahan Morris (AHMM) completed a £35m refurbishment aimed at enhancing connections and facilities throughout the complex. But that elusive and desirable street presence could not be achieved until 2007, with the creation of a new ground-level entrance on Silk Street. It now sits opposite two new cinemas, completed in 2014 and boasting their own street-level cafe and restaurant.

The Barbican is now busy making sure that connections between all of its facilities are maximised. There are exciting programmes of cross-art entertainment combining dance, art, theatre and music under specific themes. The Barbican's director of audiences, Leo Thomson, says: 'Our approach to cross-arts participation reflects the changes in our relationships to audiences and artists, and how we engage with our members.' Beyond its immediate footprint, it has developed a pioneering outreach programme for the less culturally enriched parts of East London, while in its own neighbourhood it is working alongside other major arts institutions - including the Guildhall School of Music and Drama and the Museum of London - to 'create an unrivalled destination for art, history, learning and entertainment in the City.' The Barbican already has a vibrant membership programme - perhaps the one desirable side-effect of having no street presence for decades is how successfully it has worked at engaging with members via print and online relationships. In that respect, says Thomson, 'One of the joys of the live arts is the ability to go long form, and its appeal is definitely of this age - as a result of technology and everything being instant. Immersion is something the arts can really offer.'

Connecting with audiences is something that newspapers have long been expert at. Taking this to a new level, news emerged early this year that The Guardian newspaper is creating a physical event space to host talks, concerts, multi-arts festivals and educational courses, in a delicious inversion of the usual process (build the arts centre, create a programme and grow your audience). A neglected 19th-century train shed in King's Cross is undergoing major structural renovations and reinvention.

Says Jonathan Robinson, project leader for The Guardian Media Group: 'Newspapers were formed in the coffee-house culture of 18th-century Britain, so part of us is returning to those roots and fostering human encounter and interaction.

But it's about exploring global concerns as well. The events and experiences will range from debating the Middle East and climate change to exploring personal questions about love and family and how to find a livelihood that has meaning and purpose. It's like the Saturday newspaper coming alive in all its diversity.'

Says Robinson: 'There is a demand for this on all sorts of levels, not least a huge appetite demonstrated by the events we're already running. There's also a strongly held belief that journalism needs to evolve for the challenges of our age...through live debate and conversation, and building relationships through people is crucial. It's also crucial to support not just conversation but the journey, from people talking about what matters to doing stuff that matters.'