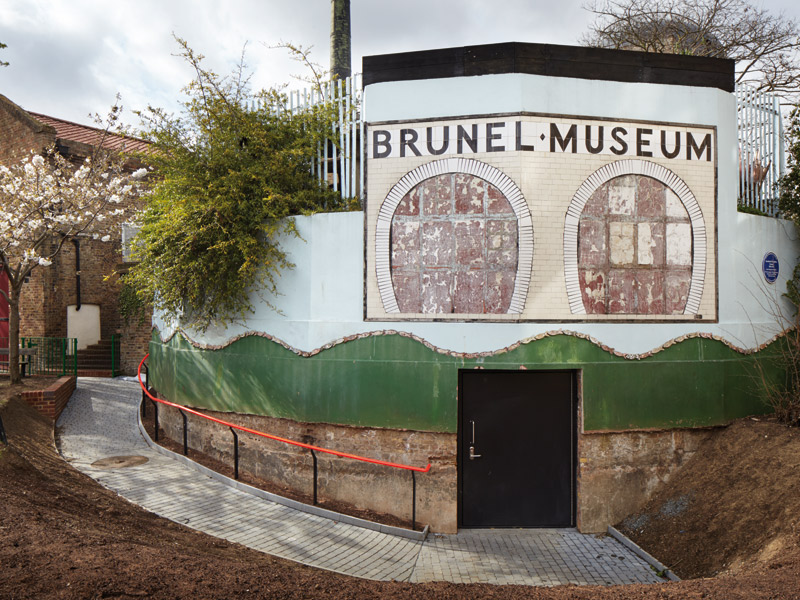 Designed when he was a teenager, with his father Marc Brunel, Isambard Kingdom Brunel’s very first project - the Thames Tunnel, spanning 396m underwater - was a world first. Celebrated with underground fairs and banquets before being converted for steam trains, its entrance shaft has lain inaccessible and unused for more than 150 years. Now, thanks to a new entrance and staircase by Tate Harmer, it is welcoming revellers once again

When Isambard Kingdom Brunel's very first project opened in 1843, it was nicknamed the Eighth Wonder of the World. Running 396m from Rotherhithe to Wapping, some 23m below the murky waters of London's River Thames, the Thames Tunnel was the first underwater tunnel in the world. Created with his father Marc Isambard Brunel, it was designed to carry cargo and link the growing docks either side of the river. Yet, young Brunel nearly didn't live to see it complete, narrowly escaping death when the partially completed tunnel flooded in 1828, killing six workmen. (In a twist of fate, he was sent to Bristol to recuperate, where he heard of a competition for a certain Clifton Suspension Bridge...)

Abandoned and sealed off for seven years, when the Thames Tunnel finally opened to the public 15 years later they had run out of money to build the ramps that would be needed to allow horse-drawn wagons to bring cargo down into the tunnel. Instead, the tunnel and entrance shaft leading to it were opened as an attraction for insatiably curious Victorians - a million of them flocked to the site in the first three months to pay a penny to descend the staircase and promenade along the tunnel. Long before trains rumbled through, from 1869, Brunel's cross-tunnel arches were alive with acrobats, tightrope walkers and fire-eaters. Now, after 150 years of being inaccessible, the redundant, Grade II*-listed entrance shaft to the Thames Tunnel has reopened again as a performance space below the Brunel Museum.

Sealed off from the London Overground trains below by a new concrete floor, the cylindrical space was, for a short time, entered via a small hole and rickety scaffolding ladder. Today, a new entrance and cantilevered staircase by architecture practice Tate Harmer brings you into the 15m-deep underground chamber, renamed the Grand Entrance Hall.

'We made a decision to keep the space very raw and to not really touch it at all,' says Jerry Tate, partner of Tate Harmer. 'The staircase is very minimal structurally; there's no fixings to the wall at all. It's really meant to be a 21st-century addition that just pokes into the space and gives it enough to help it function as a performance space, leaving you to feel the power of the chamber.'

The sooty walls - blackened from the steam trains that ran through the tunnel before it was electrified and incorporated into the London Underground in 1913 - still bear the marks of the 19th-century staircase, with the rusty hooks that used to hold the balustrades still on display. A bright, neon handrail guides visitors down the new curved black staircase into the centre of the 'sinking' shaft, originally created above ground.

Marc Brunel used a 1,000 tonne iron ring to gradually sink the space into the ground by the force of its own weight, like 'a massive pastry cutter,' says Brunel Museum director Robert Hulse. 'Brunel was the first person to understand that the best way to build underground is to build overground and sink it.' he adds: 'It's a very important piece of engineering and a travesty that it has been inaccessible for so long.'

A tiny museum that survives solely on sales and admissions, the Brunel Museum hopes that the Grand Entrance Hall - 'a palace of delight and entertainment,' as Hulse calls it - will entertain as well as educate new audiences. The underground space is now hosting musical performances, pop-up opera and even weekend cocktail bars. Brunel's spirit lives on.

You can also watch a video by Paul Raftery of the project here.