Just off Brick Lane, on Wentworth Street in London’s East End, is the Dellow Centre, new premises of the charity Providence Row that supports the homeless in Tower Hamlets and the City of London. London-based architect Featherstone Young has just completed a new arts and activity building on a site opposite the charity’s exisiting facilities, built in the Eighties. ‘They appointed us because we were local,’ says Sarah Featherstone, director of Featherstone Young. ‘I’m not sure how familiar they were with our other work, but they wanted an architect who really understood the local area.’ Featherstone Young has undertaken jobs with a sensitive brief and hugely specific  requirements from the client with great success in the past, exercising great rigour in understanding the client’s needs and finding a suitable design response. The original brief from Providence Row had been for a two-storey building, but it was reworked to incorporate a third. Featherstone Young has delivered a cheerful yet robust 367 sq m building in just 11 months that makes the most of a cramped site and a tight budget of just £475,000. Sat on the eastern side of the Dellow Centre courtyard, hemmed in behind some forbidding access gates, the new building is shoehorned between an office building that faces out on to the street and a massive hole in the ground, that will soon be an EDL substation. As a result, it only has one facade, facing south-east. The ground floor is clad in corrugated steel in shades of green, partly perforated, to add texture and porosity to the surface. It is a welcome splash of colour among the monotonous palette of bland?brick that dominates the area. ‘I think it’s OK to have some fun with a project like this, particularly when using industrial materials like steel,’ says Featherstone. The central panels of the wall are pivoted to open up the workshop behind to the courtyard – the centre offers bike maintenance courses over a six-week period to groups and hopes to expand its remit. In summer, activities will spill out into the courtyard. ‘The project was about addressing the courtyard. Allowing the clients to see what is going on through the workshop windows and doors will pique curiosity,’ says Featherstone. Above this is a cantilevered level clad in Bluclad external rainscreen board that from a distance has the appearance of concrete. The facade zigzags across the building, with its four windows set in to be angled away from the hostel rooms opposite while maximising the amount of light entering the building from the crowded space outside. This tiered facade challenges the rectilinear geometry of the courtyard and provides the building with a visual stimulus. It is a bold move for the architect – and Providence Row – to make, but it speaks volumes about the conviction that the architect has in the building and that the charity has in its presence. On the second floor the green steel reappears, the building line receding to create a tight but pleasant enough balconied floor for the charity’s administrative staff. Large sliding glazed doors allow the light to pour into the open-plan office that is home to eight full-time staff and an army of support staff and therapists who help the Dellow Centre operate.

The interior plan is simple: the building has three principal spaces that sit behind the facade – a workshop on the ground floor, a classroom-cum-performance room with large timber-framed windows on the first floor and offices on the top floor. Arranged behind this are much-needed storage spaces for the centre and a wide stairway that creeps up the northern wall. The finishes are raw. Painted breeze-block walls, unpolished concrete floors and plastic-cased fluorescent lights ensure there is no glamour. Yet the building does not feel banal or tawdry. The architect has provided well-lit, warm spaces that will be easy to maintain on a shoestring budget – testament to the care that has been put into the project. Featherstone Young has demonstrated its expertise in crafting buildings whatever the budget and purpose, be it a private residence such as Ty-Hedfan or the Dellow Centre. The latter is an excellent example of an architect exerting control over a site and project that could so easily have been mired in mediocrity. This is a very good building that has been delivered on a tight budget, managing to find a balance between making a visual statement and providing practical space with character and purpose, for a charity and its clients that are in need of both. 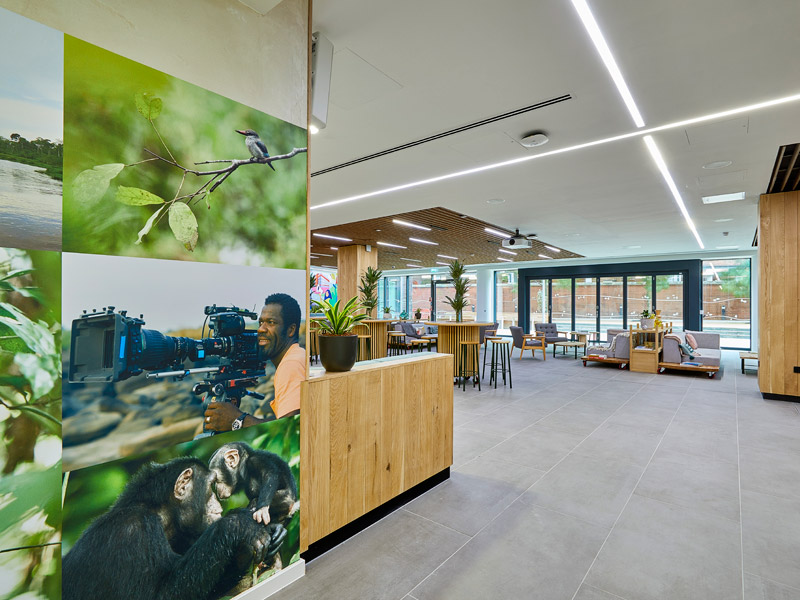