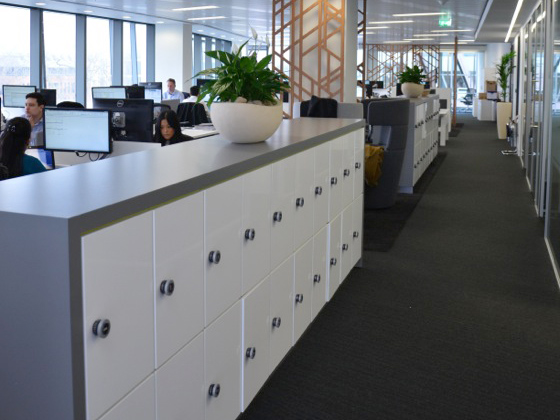 Workplaces are changing; design has become an integral part to a cohesive office with many innovative concepts to support the workflow.

BeCode is one of the many companies striving to change the way we think and work in the office, and has introduced to the market a new range of locks to achieve this. It was the product of choice for CBRE Global Investors after it consolidated two London offices into their new premises at One New Change in 2012. Its aim was to make the most efficient use of the new offce space and create an environment to increase productivity and encourage staff retention. After extensive global research into the company's international offices and working practices, CBRE Global Investors issued the 'Workplace 360' programme. It highlights the importance of research, planning and the essential ingredients that make a shared work environment successful, which includes the removal of pedestals and the dramatic reduction in filing storage. CBRE office manager Zoe Harris has been involved from the first office concept to the current day-to-day running of the facility. She says that the BeCode keyless locking became an essential feature of the design scheme.

Key considerations were the use of space and the move to a more digital and less paper dominated environment. Harris believes the personal lockers are fundamental to the success of the new offices:

'The lockers were a big change; they made people think of school, especially as you consider they were all coming from static desks with pedestals.' There are a number of high and low level working areas used to accommodate various working styles between teams. These include a library, coffee stations, traditional desking and soft seating. However, the lockers and underlying principles of a shared workplace remain.

'The surveyors are out of the office a lot and so their area sees true rotation of desk space, whereas the corporate finance team are in 100% of the time and most individuals stay at the same desk position'. Harris explains that it was essential that the employees found everything easy-to-use. 'With such a culture change anything that is even a small irritation can become a big frustration. It was important that we helped to introduce the technology and find things to make the whole system work quickly and easily. The BeCode locks have allowed this to happen.'

Harris stresses that it is not just about choosing the right products, it is also important for suppliers to offer service and support. 'What is important to us is that BeCode are happy to be here on site to help us to introduce the new locks and advise us.'