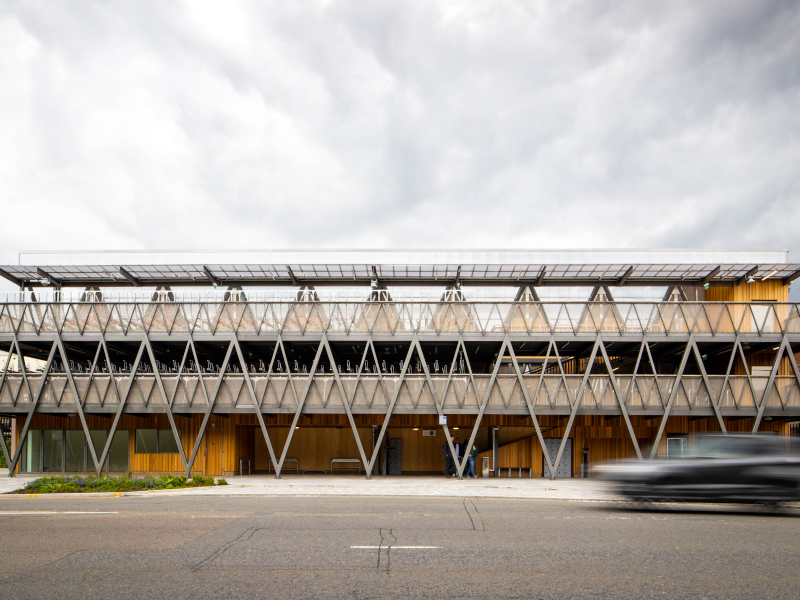 By 2050, the population of the Royal Borough of Kingston upon Thames is expected to grow by 30% from 2015 figures, highlighting the need for better travel connections. The scheme aims to encourage cycling, walking and public transport, reduce carbon emissions and improve health and well-being for Kingston’s residents and visitors.

With busy roads surrounding the station, pedestrian safety was a priority. Narrowing the road and widening the pedestrian island helps to slow traffic, while repaving the road and station forecourt prompts drivers and cyclists to slow down and be aware of pedestrians. Speaking about the geometric design of the modular overlapping structural truss, SWA founder Sarah Wigglesworth said, ‘Our influences for both the bridge and the hub reference the work of [photographer and former resident] Eadweard Muybridge, as well as the form of a crown, a nod to Kingston as the historic setting for the crowning of six Saxon monarchs on the King’s Stone, still visible in the town centre.’

In addition to bike parking, there is cargo bike and cycle rental, a vending machine with bike essentials, workshop space and a cafe to act as a social hub.
swarch.co.uk | burohappold.com 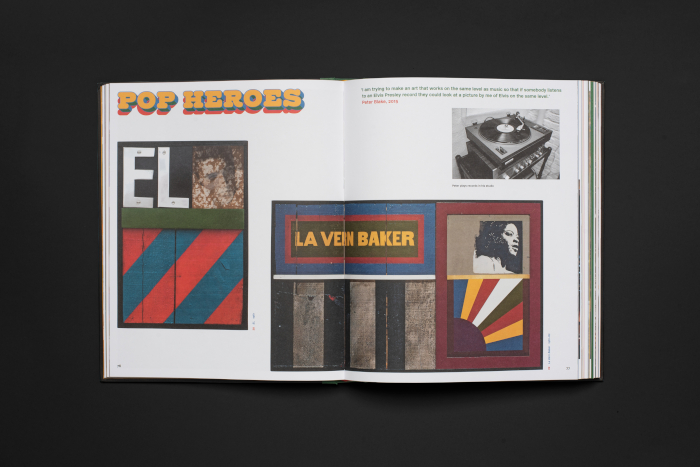 Published by Thames & Hudson, in association with Waddington Custot, Peter Blake: Collage is a major new monograph on the artist’s work. Design studio Praline worked on the book using materials from Fedrigoni, with a design that uses 30 different typefaces and colours sampled from Blake’s work. The book eschews a chronological structure for a thematic one, and highlights the recurrent threads of Blake’s career.

The book’s design is inspired by the medium of collage and the playful nature of Blake’s work. It uses seven different Fedrigoni materials to introduce different textures, and features 30 different typefaces – some newly designed, some customised and some sourced – inspired by Blake’s love of typography and extensive library of references. New photography commissioned of Blake’s Chiswick studio is dispersed throughout the book; in addition, there is an interview with the artist, an essay, and a foreword by David Hockney, who befriended Blake at art school.
designbypraline.com | fedrigoni.co.uk

Lighting design practice Nulty celebrated its tenyear anniversary in June. Founded by lighting designer Paul Nulty, the business was meant to ‘disrupt the lighting industry’ by taking lighting design into new areas and exploring the potential of lighting design in the built environment. ‘I wanted to build a brand that would champion the importance of light,’ Nulty explained. In the decade since, Nulty has grown substantially and is now spread across the UK, US, UAE and Asia. Projects currently in the pipeline include the Diriyah Gate Development in Saudi Arabia and The Westin Hotel in London, adding to its large roster of projects across the globe.
nultylighting.co.uk

Multidisciplinary company HDR has appointed Richard Papworth as a director in order to strengthen its civil and structural engineering expertise across all sectors. Papworth has almost 25 years’ experience in the built environment, and has spent time working in the UK, Australia and Ireland, and across a variety of international projects. On the news of his appointment, Papworth said, ‘I am so excited to be joining HDR. I see this as a great opportunity to bring HDR’s forward-thinking practices into the UK and EMEA market, and at this point in my career I am looking to push the boundaries of this profession from a cultural standpoint as well as an engineering one.’
hdrinc.com

‘Epic Iran’, an exhibition from the V&A exploring 5,000 years of Iranian art, design and culture, has opened with an immersive design by architecture practice Gort Scott.

The exhibition explores the historic civilisation of Iran, from the earliest known writing, through the 1979 revolution and up to the present day. Responding to a brief of ‘exhibition as city’, Gort Scott was influenced by depictions of cities and architecture in the Shahnameh, or ‘Book of Kings’, the national epic of Iran. In turn, the exhibition design is conceived of as a journey through a city, dividing the two large halls of the V&A into ten spaces, each with atmospheres shaped in relation to the objects displayed and their historical context. 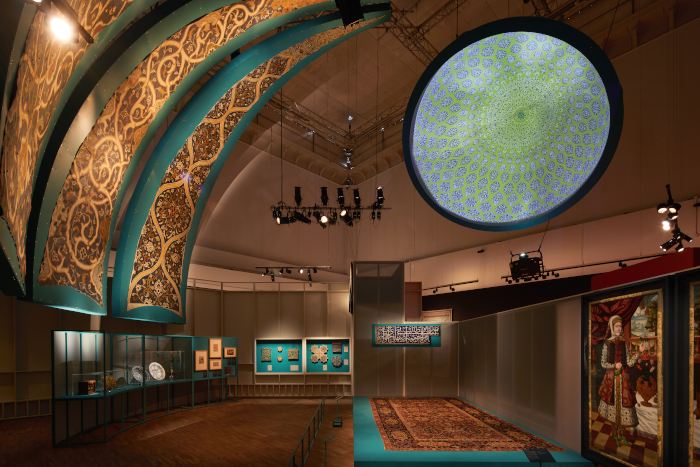 Architectural moments punctuate the exhibition, some with shaped walls, others defined using fabric and projections.

Philippa Simpson, V&A director of design, estate and public programme described the ‘fresh vision’ Gort Scott brought to the project, ‘complemented by a sophisticated understanding of the objects, and a genuine commitment to creating an outstanding experience for every visitor.’

Gort Scott and the V&A prioritised sustainability by choosing low-carbon and reusable materials such as timber and hempcrete, reusing materials from the V&A’s stores and from previous exhibitions.

Similarly, the demountable exhibition materials for ‘Epic Iran’ can also be reused once the temporary exhibition ends. gortscott.com | vam.ac.uk

London-based Nina Moeller Designs has recreated its popular CURVE bench for outdoor use. The CURVE Outdoor seat has been made with HI-MACS Alpine White, fabricated by qubicle. 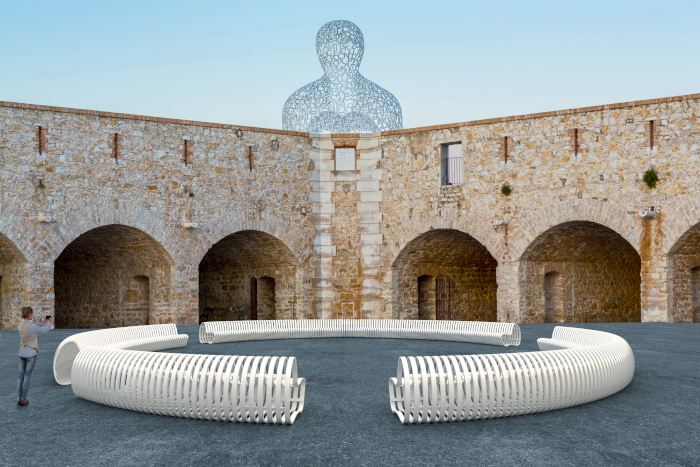 ‘The design was inspired by nature – to link together and provide a sense of unity’, explained founder Moeller. HI-MACS’s solid surface material, made of minerals, acrylic and natural pigments, was chosen for its ability to be thermoformed into CURVE’s distinct shape. The non-porous material is also able to withstand wind, rain and sun for long-lasting outdoor use. The chairs can be used singularly or linked together.
ninamoellerdesigns.com | himacs.eu

As part of an ongoing project with Pallant House Gallery in Chichester, Wright & Wright Architects was commissioned to design a miniature art gallery to house miniature artworks – measuring 100x150mm – by contemporary British artists.

There is a tradition of miniature galleries in Pallant House’s collection dating from 1934 and 2000. These, and the 2020 gallery, offer snapshots of a particular moment in contemporary UK art, while creating a piece of art and architecture in its own right. 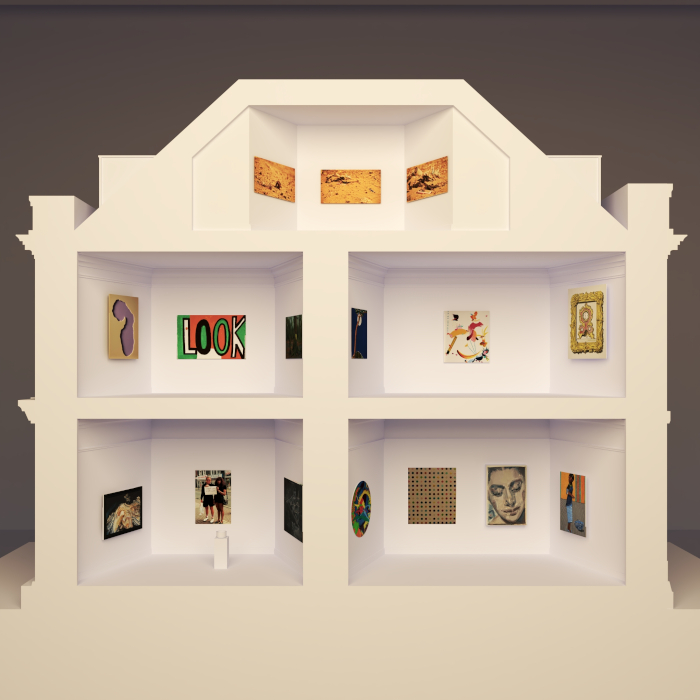 Wright & Wright took the form from the gallery itself, abstracting its Grade I-listed Queen Anne town house into a finely-carved solid – it was ‘subtly pushed and pulled and sliced open to provide a dynamic object in the round’, explained Wright & Wright partner Stephen Smith.

Other studio projects for Pallant House include essential works to the town house, as well as unlocking the potential of a coach house building at the site’s rear. Pallant House is looking to attract new audiences and diversify its programmes. The new model art gallery was conceived of as something inspiring and uplifting, giving a different and dynamic perspective on art and spaces for its audience. For Wright & Wright, this raised conceptual questions of purpose and outreach; architectural ones of scale and form; and the technical challenges of scaling down detailing, lighting and finishes.
wrightandwright.co.uk | pallant.org.uk

An example of circular design, the Ohmie lamp by Krill Design uses Sicilian orange peels and 3D-print to create a 100%-natural and compostable lamp. 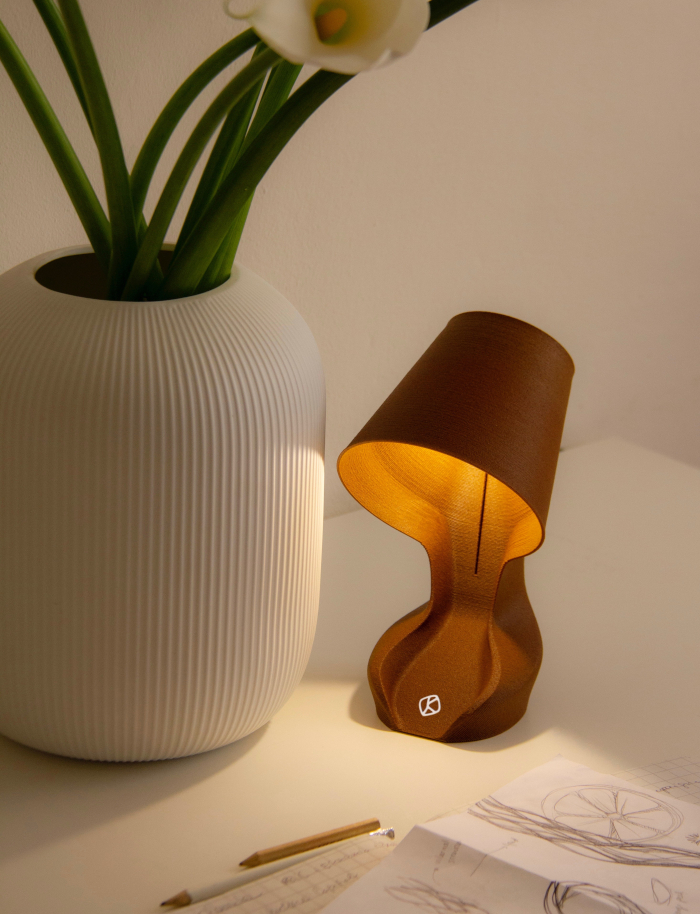 Krill Design specialises in the research and development of organic materials; its clients include Enel, Autogrill and San Pellegrino. The material used for the lamp is a biopolymeric base derived from vegetable starches, to which the orange peels are added. It is designed to be composted in industrial composts.

A Kickstarter was launched on 5 July to produce it, and more information can be found on the website.
ohmie-krilldesign.net

Organised by the British Contract Furnishing Association (BCFA) and Women in Office Design (WOD), Clerkenwell Open takes place on the 9 and 10 September to communicate that Clerkenwell is ‘alive’ again. The event will provide an opportunity for architects, designers, specifiers, dealers and end users to network in person, and to join seminars and product launches – all located in and around Clerkenwell’s showrooms.
clerkenwell-open.co.uk | thebcfa.com | woduk.com

The judging panel for the Surface Design Awards 2022 has been announced. Its co-chairs are Nicola Osborn, creative director of multidisciplinary design studio Basha-Franklin, and Joseph Henry, principal project officer in the Greater London Authority Regeneration team.

Drawing on the architecture, design and property communities, the rest of the panel has been selected by the co-chairs. Osborn has invited Rosie Haslem from Streetsense, Giles Miller of Giles Miller Studio, Alex Morgan from Morgan Capital and Argent’s Sam Williams. Henry has recruited Rosine Gibbs- Stevenson from The Architecture Foundation, Jonathan Hagos of Freehaus and Sumitra Upham of the Design Museum. The awards will take place on 10 February 2022 as part of the annual Surface Design Show in London’s Business Design Centre from 8–10 February.
surfacedesignshow.com

The lighting design offices from weisspunkt und purpur (wpp) and Lichtvision Design have merged to meet the growing demands of the lighting design industry, with a focus on digitalisation, human-centric design and sustainability. Christian Spork, founder of wpp joins Lichtvision as design director, bringing with him a background in industrial design and mediatecture and 25 years’ experience, ranging from stage shows to retail and exhibitions. Karsten Ehling, managing director of Lichtvision said, ‘In our conversations we discovered that we share the same values, and that we can enrich each other’s portfolio. It was, therefore, an obvious step to pursue our visions together. His [Spork’s] expressiveness in terms of content and his ability to tell stories with light enriches us and our partners.’
lichtvision.com