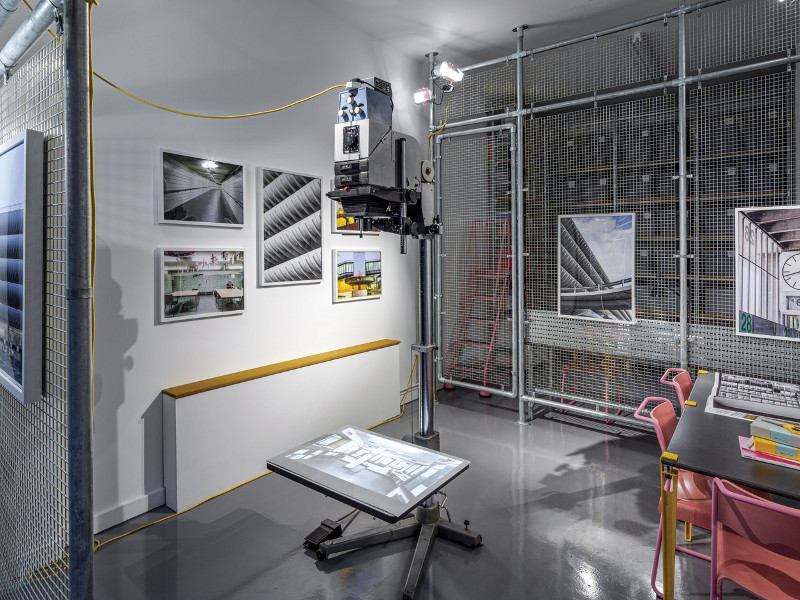 Gardner was keen to open a public-facing space to curate exhibitions of documentary photography with an architecture angle – a subject of great interest to him. Exhibitions so far include one celebrating 50 years of brutalist icon Preston Bus Station (and its Stirling Prize-winning renovation) and a photography series of imitation Morley’s chicken shops by artist collective Morley’s… Or Less.

Gardner tells us about working with Studio C102: ‘I have been lucky enough to photograph many Studio C102 projects and love the practice’s use of modest materials in novel ways. At my new gallery, Studio C102 has transformed an unassuming white box into an exciting and intriguing space, while providing me with a super-organised framework for storage of equipment and my archive. I particularly love the playful touches, using colour to subvert everyday objects, such as the baby-pink warehouse steps. It’s also an extremely flexible and practical space, thanks to features including a demountable meeting table. These reconfigurable elements will allow me to host a broad variety of exhibitions and other events such as film screenings and workshops.’

Studio C102’s other projects include the 1Rebel exercise studios, one of which, 1Rebel Victoria, won an FX Award this year.
studio-c102.com | garethgardner.com Acoustic panel specialist Woven Image is celebrating 15 years of the EchoPanel. Ecologically conscious since the start, the product remains a market leader as demand for sustainable solutions continues to increase. The EchoPanel is 100% recyclable and offers a 10-year life expectancy. It is made of 60% recycled PET bottles, diverting approximately 4.2 tonnes of post-consumer waste from landfill for every 1,000 sheets. The patent was registered in 2004 and in the years since the range has expanded hugely, growing from two colours – black and grey – to a range of more than 30 colourways, as well as designer collaborations. The expansive collection now spans wallcoverings, acoustic tiles, room dividers and suspended ceiling solutions.
wovenimage.com

Richard Blackwell is to leave office steel storage supplier Bisley after 30 years. Having joined the company in 1989, he most recently held the position of CEO for four years. During his time at Bisley, Blackwell has seen the business change, expanding into new regions and new sectors, including manufacturing in wood. Well-respected in the industry, Blackwell will be departing the company to pursue new ventures.

Milliken and Humanscale Set the Bar on Sustainability

On 14 November, office furniture supplier Humanscale and flooring firm Milliken held an event in Birmingham focused on sustainability in their businesses. Titled Setting the Bar on Sustainability, there was a hard-hitting keynote presentation from Jo Ruxton, an award-winning filmmaker, plastic campaigner and Daily Telegraph Pioneer of the Year, followed by presentations from Hani Hatami, sustainability ambassador at Humanscale, and Kate Collier, the marketing communications manager for Milliken.
humanscale.com | milliken.com

HOK’s London Studio has named Gary Clark as its regional leader for Science + Technology, a role that covers the UK, Europe and the Middle East. With three decades of experience, Clark has worked on such projects as The Wellcome Trust Headquarters in London, the Jubilee Campus for Nottingham University, and the Gasholders London residential apartments. Clark has excellent sustainability credentials: he is an advisor on sustainable policy to the UK government, is chair of RIBA’s Sustainable Futures Group, and was instrumental in shaping the organisation’s Declaration of Environment and Climate Emergency plus the RIBA 2030 Climate Challenge. He is also a visiting professor of sustainable architecture at Robert Gordon University in Aberdeen.
hok.com

GoSmart launches in the UK

GoSmart Intelligent Storage Solutions has launched in the UK, offering a curated selection of advanced, secure technology solutions for electronically controlled locking and storage. The new extensive range of devices comes from leading industry partners, including Tz, Lehmann and Flexlock. GoSmart is a revamp and upgrade of Becode UK Ltd.
gosmartstoragesolutions.com Design studio Flint has created a new studio and gallery for Studio Pottery. Part of the new Grosvenor development Eccleston Yards in London, it joins a community of hospitality and retail spaces. The site also opens out onto a street in the Belgravia neighbourhood, a quieter pocket of the capital close to the transport hub of London Victoria. Its large windows cause several passers-by to stop and look at the activity inside, such as wheel-throwing classes, as well as the pottery on show, including that by the studio’s artistic director and resident potter Gregory Tingay.

Flint’s associate director Vesna Aksentijevic worked with Studio Pottery director Lucy Attwood to create the space inspired by the Bauhaus workshops. A minimal material palette of plywood, glass and timber functions as a backdrop to the artwork and activity within. Reclaimed pottery boards provide shelving, while Flint designed a bespoke six-wheel bench for the teaching area. Circulation routes have been designed to fit the wide pottery boards that transport works-in-progress between the wheels, the glazing area and the kiln. The studio is split into four sections: one area for members, a teaching space, and a third studio for the resident potter; the fourth space (and entrance) features a library as well as vitrines showing examples of work from leading ceramic artists such as Lucie Rie. Seeing pottery as an art form and deserving of elevated status (and price labels) the window displays feature a monolithic landscape of plinths to show off pieces for sale.
flint-london.com Office furniture supplier and consultant Rainbow has transformed St Albans library with its colourful furniture, including soft seating, tables, desks and task-seating, and more. Ingleton Wood was responsible for the refurbishment of the library, with Rainbow providing all loose furniture elements. The bright and stimulating interior includes a ‘creator space’ and a dedicated children’s area; across the whole area colour is key, and is used for feature walls, digital wallpaper and the circular acoustic wall panels that absorb noise. Rainbow’s brightly coloured high-back armchairs and stools complement the interior’s bold palette of fuschia pink, lime green, blue and purple, creating an inviting and eyecatching space for the local community.
rainbowdesign.co.uk

The finalists have been announced for the sixth year of the Surface Design Awards. Celebrating creative use of surface materials and lighting, the shortlisted projects are of particularly high quality this year, spanning 13 countries from 34 different organisations, including Steven Holl architects, Mikhail Riches, AECOM, Wilkinson Eyre and Chris Dyson Architects. The winners will be announced at the Surface Design Awards on Thursday 13 February.
surfacedesignawards.com

Ingo Maurer, lighting designer and ‘Poet of Light’, dies at 87

Ingo Maurer, a German industrial designer known as the Poet of Light, has died at the age of 87. Maurer was experimental in his approach, with his first design in 1966 being a large crystal bulb with a smaller one inside, while in the early 2000s he was among the first to work with LEDs, embedding them in wallpaper and glass tabletops. Maurer’s company has completed a number of ambitious civic commissions, and his designs have been championed by the Museum of Modern Art: Bulb (1966) is in the collection, while his design Porca Miseria! is in the current MoMA exhibition, Energy.
ingo-maurer.com

Mikhail Riches has been in the public eye following its Stirling Prize win for the Goldsmith Street council housing scheme in Norwich; now, the practice has been picked alongside six other firms to design homes for London’s former Olympic park, for a scheme providing 1,500 houses and workspace for 2,000 jobs.
mikhailriches.com