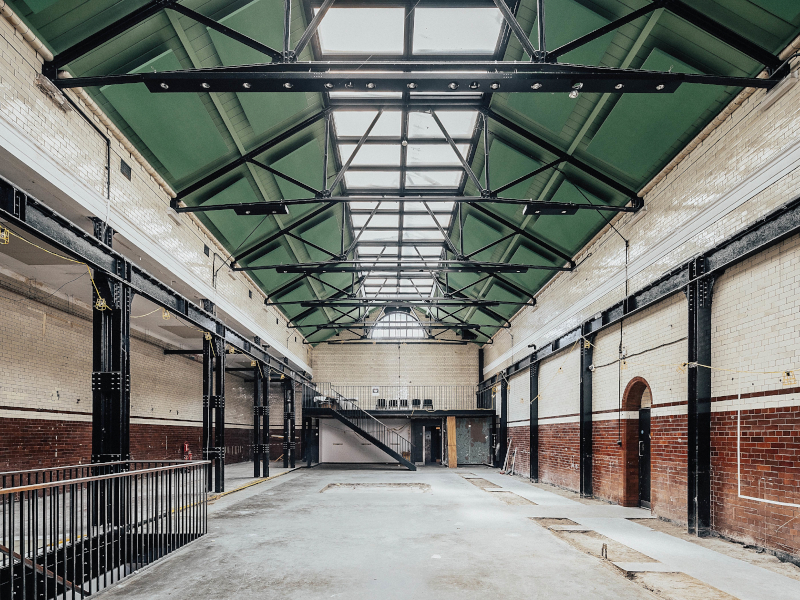 Vitra, the Swiss design company, is set to open a flagship UK showroom at the Tramshed building in Shoreditch to coincide with the London Design Festival in September 2022.

The listed Tramshed building on Rivington Street in Shoreditch was built as a power station for the East London Tramway in 1905. Vitra has renovated the interior, preserving all the defining historic details and forging a link between old and new. The 920 sq m exhibition space is divided into three main areas.

On the ground floor, ‘The Club’ is an office installation geared towards the post-pandemic needs of people and companies.

‘The Gallery’ in the basement of the Tramshed contains a presentation of Vitra’s product portfolio and curated spaces dedicated to various themes.

The third area – ‘The Cottage’ – is a space to host events and meetings, which is located on the first floor of the building and will open in 2023.

Tramshed will open on 20 September 2022 with an installation celebrating Vitra’s ongoing collaboration with the family of iconic French designer Jean Prouve and will introduce some new additions to Vitra’s Jean Prouve collection, including a limited edition of the Fauteuil Kangourou, designed in 1948.
www.vitra.com

Copenhagen-based OEO Studio has completed work on several spaces within the Designmuseum Denmark, including the design of a new cafe and museum shop. OEO Studio’s work forms part of the first major redesign of the museum since that undertaken by iconic Danish designer Kaare Klint in the 1920s. 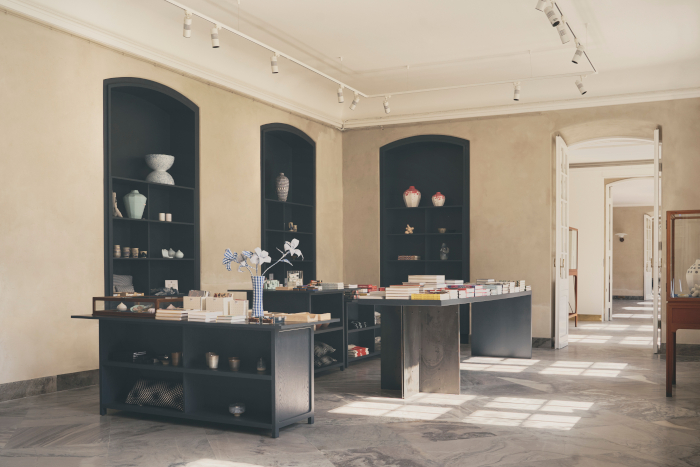 Known as the father of modern Danish furniture design, Kaare Klint’s style was epitomised by clean, pure lines, the use of the best materials and craftsmanship.

The starting point for OEO Studio’s design scheme was to honour Klint’s work, while also creating new, exciting and functional public spaces at the museum that retain a sense of place.
www.oeostudio.com

Andy Illingworth has been promoted to head of interiors at HLM Architects where he will lead the practice’s 19-strong interiors team. He joined HLM in July 2002 as a member of the interior design team and has worked on a variety of projects and diff erent design disciplines. More recently, he worked on the Royal Hospital for Children and Young People and Department of Clinical Neurosciences, creating the interior and wayfinding vision. 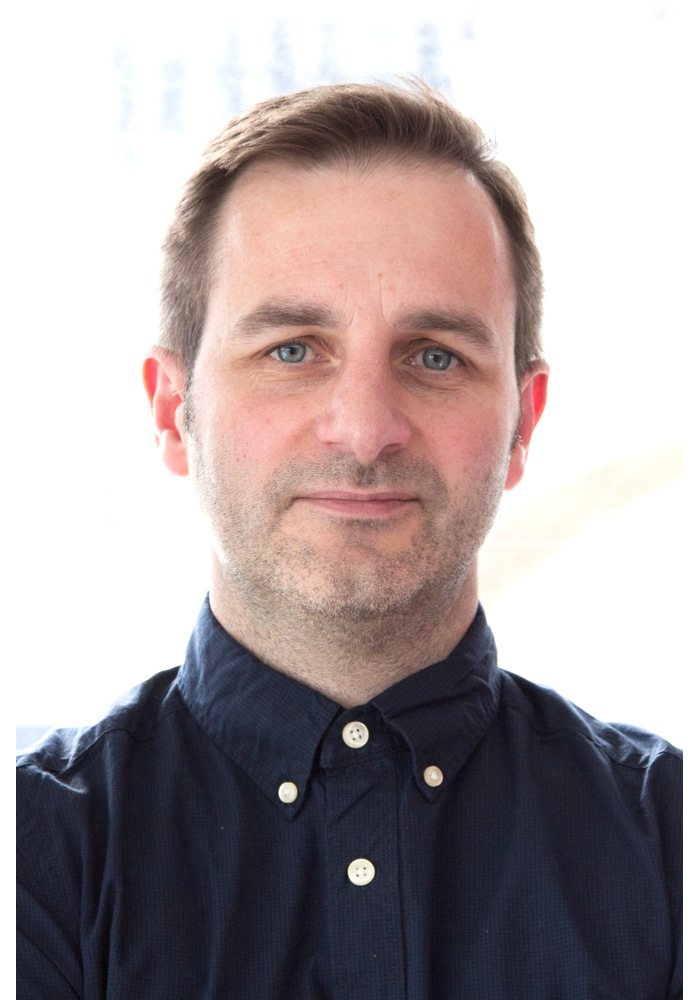 In his new role as head of interiors, he will continue to work with clients and colleagues and lead the interiors team.

Illingworth said: ‘Driven by a commitment to creating spaces that improve people’s lives, our interiors team has a strong track record of designing and delivering high quality projects for clients. We’re strengthened by the passionate and creative individuals who make up our team and are excited for this next chapter, which I’m proud to lead in my new role as head of interiors.’
www.hlmarchitects.com

To celebrate the Commonwealth Games in Birmingham, designer Adam Nathaniel Furman was commissioned by Fierce Festival to design Babs’ Baldachino, a Queer monument to sit at the Edgbaston Resevoir for ‘The Healing Garden of Babs’ series of events. The brightly coloured piece encourages exploration and expression and is a ‘riotous and delicious celebration of the spirit of Queer Birmingham’.
www.adamnathanielfurman.com

East London Rug company and design house, Floor Story, will open the doors to a new showroom and studio space during the London Design Festival 2022. The multifunctional space, which will also be home to workspace designers Trifle, will welcome events, workshops and collaborations, as well as being a home to the two businesses, which were both born in the East End.
www.floor-story.co.uk

The Wokingham Leisure Centre at Carnival Hub in Wellington Road, Wokingham, has officially opened to the public. 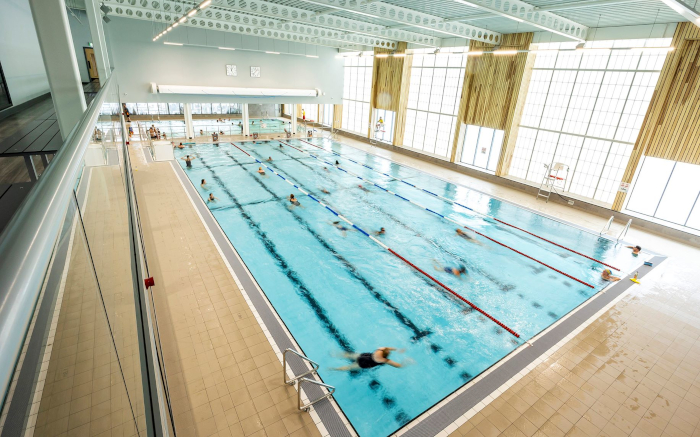 The multi-million-pound Carnival Hub community complex forms a significant part of the second and final phase of the Wokingham town centre regeneration vision to meet the evolving needs and preferences of residents and visitors. The heart of the site, which replaces an ageing 1990s building, brings together an outstanding new leisure facility, and a new library that is currently undergoing fit-out.

Claire Wakelin, HLM London studio director, said: ‘The flagship new leisure centre and library complex in the centre of Wokingham will regenerate the local area and public realm, creating a new focal point for the community. A major design objective for us was to deliver an exceptional, sustainable and modern facility within the vibrant Carnival Hub for residents and visitors to enjoy for years to come. The centre provides an enhanced offering and a welcoming environment where people can have fun, recharge, and where sporting fans can train and compete.’
www.hlmarchitects.com

HOK’s London Studio has secured detailed planning approval for a new neighbourhood of 92 homes in Northolt, 100 per cent of which will be affordable, on behalf of Broadway Living – Ealing Council’s wholly-owned housing company. 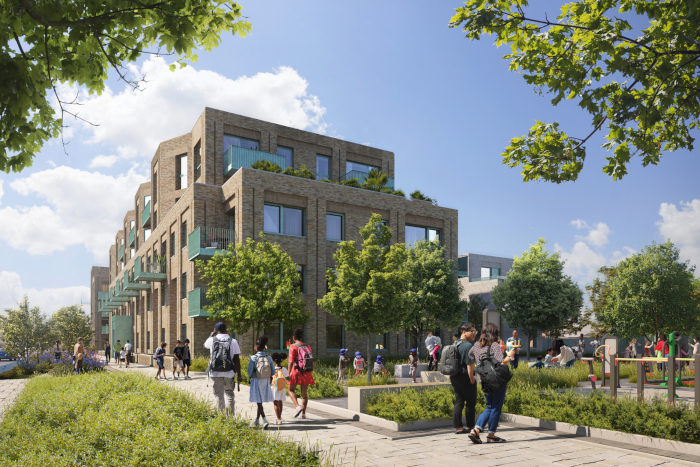 Northolt Grange will provide a mix of apartments and houses across a variety of housing tenures.

The homes are set in a green and permeable neighbourhood, with the buildings set back from the street to create green and active spaces. The landscape-led design will see the green streets connect to a new public park and creates a new entrance to an existing primary school, allowing pupils and staff to enjoy the outdoor space.
www.hok.com

London-based architecture and interiors practice, Jump Studios, along with its parent company, Populous, has designed the interior of the new $1.1bn UBS Arena in Belmont Park, New York.

The 17,255-seat UBS Arena is the new home to the NHL’s New York Islanders. The arena was designed by Populous as a multi-purpose facility to host both hockey and live entertainment. 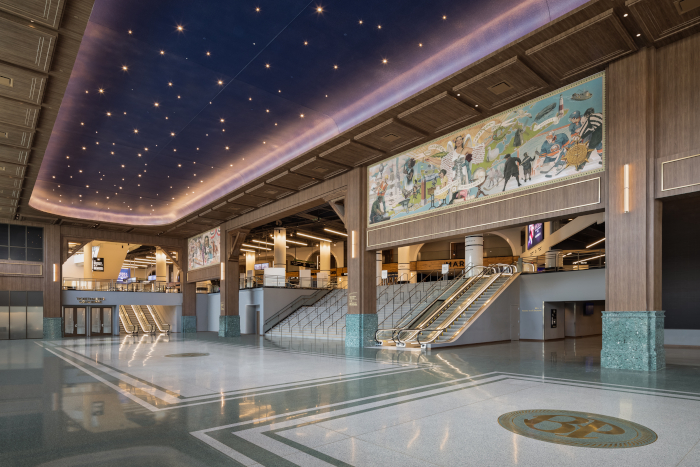 Working with Populous, Jump Studios has created a venue that delivers a 21st century experience for guests, while paying homage to a team and site that is steeped in history.

Fans enter the stadium through an entrance inspired by Grand Central Station and Park Avenue Armory. The Grand Hall includes a ceiling resembling the night sky, with a mottled paint finish and embedded LEDs.

The main concourse showcases a colonnade that echoes the arches of Central Park, while tile designs are inspired by the New York subway. The arena’s food offering includes 18 market-style concessions, based on the city’s colourful kiosks.

Shaun Fernandes, co-founder and creative director at Jump Studios, said: ‘The inspiration behind UBS Arena centred around creating a space that offered a connection to the past by honouring the local history of Belmont Park and New York. By celebrating the area’s unique stories, including those of the New York Islanders, we aimed to create an arena that brings together the local community and establishes the venue as a high-quality destination for a number of different entertainment experiences.’
www.jump-studios.com | www.populous.com

Recycled content tiles from Parkside feature in the bar and reception of the low-waste restaurant Apricity. 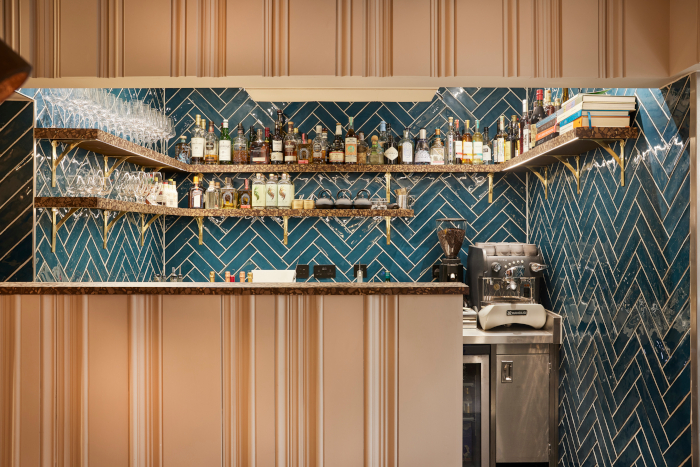 The People’s Tartan needs you! 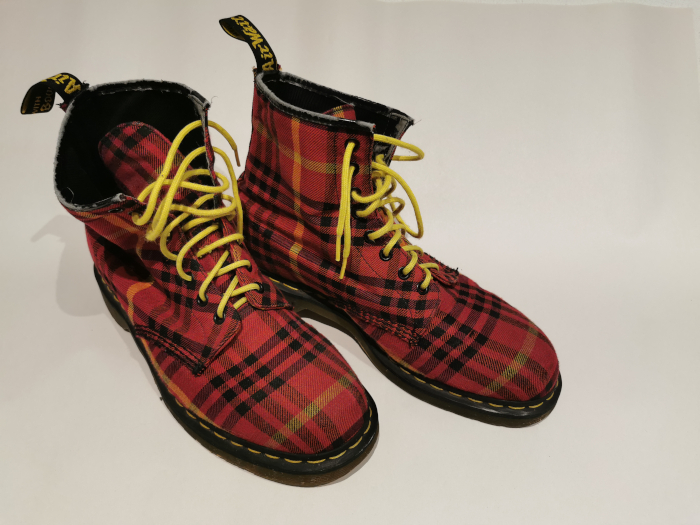 V&A Dundee has launched an appeal for everyday tartan objects to be featured in a major exhibition which opens next year. Tartan (1 April 2023 –14 January 2024) will be a radical new look at one of the world’s best-known textiles, celebrating its global story. The exhibition curators need the public’s help to complete the exhibition by finding their own tartan objects and expressing what the pattern and textile means to them.
www.vam.ac.uk

LongLife, a leading company in the nutritional supplements sector, has chosen HIMACS for the extension of its headquarters in Peschiera Borromeo (Milan). The large white cube structure, designed by architect Fernando Fantetti, is clad with HIMACS Alpine White S028 panels to blend with the existing building.
www.himacs.eu

The Young Furniture Makers exhibition returns to the City of London for one day only on Wednesday 12 October. Organised by The Furniture Makers’ Company, the exhibition will feature more than 100 designs from designer-makers that range from GCSE students to recent university graduates.
www.furnituremakers.org.uk

10 Design (part of Egis Group) has announced its merger with SB Architects, an architecture and design practice that specialises in creating international hospitality destinations. The merger will broaden 10 Design’s geographical reach in the US as well as enhancing the practice’s expertise in hospitality design.
www.10design.co

It’s your last chance to submit a project for the upcoming Surface Design Awards. Closing date is Friday 23 September 2022 with finalists notified by mid-November. Winners will be announced on the final day of the Surface Design Show on 9th February 2023.
www.surfacedesignawards.com

The design includes up to 150 new hotel rooms and eight new bars and restaurants at ground and basement levels. Birmingham City Council planning officers said the plans, drawn up on behalf of Press Up Hospitality Group and sister company Oakmount, would retain the ‘distinctiveness’ of the building and improve its appearance. 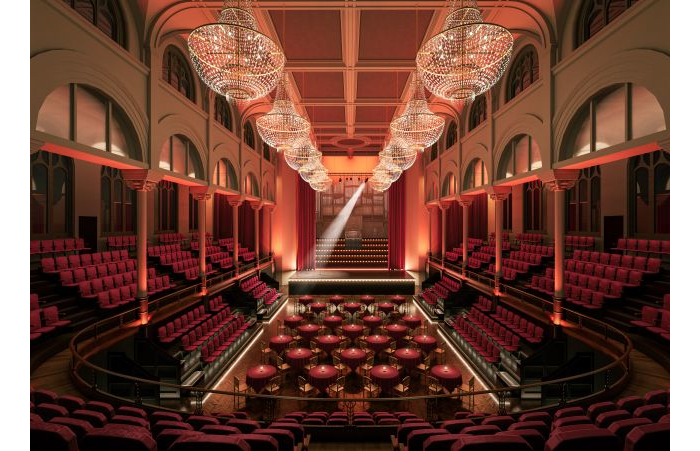 Originally built in 1904, the Central Methodist Hall became the legendary Que Club in 1989, attracting major artists such as David Bowie. Despite becoming an important part of Birmingham’s cultural scene, the club went out of use in 2017 and the building declined onto Heritage England’s At Risk Register.

Seamus Lennon, principal, TODD Architects, commented: ‘We are thrilled to see our hotel-led proposals for the refurbishment of Birmingham Central Methodist Hall granted approval...The Central Methodist Hall offers the opportunity to mix the height of Victorian grandeur with a fresh and contemporary take on the modern hospitality offer. Whilst it remains necessary to extend the building vertically to ensure the project is commercially viable, Birmingham City Council planners recognised our proposals will ensure this is done sensitively and allow the full restoration of the Central Hall...to be enjoyed by generations to come.’
www.toddarch.com

The studio was asked to create a single concept exhibition that would be the same for both venues, while also uniquely suited to the different spaces and the graphic identity of each institution.

Pippa Nissen, of Nissen Richards Studio, commented: ‘The key to this unique challenge was to design a spatially-simple approach that could work in both spaces, with a clear exhibition identity created by bold use of a series of colours and texture, which are individual to the particular artist or group of artists that forms the focus of each main segment of the exhibition.’

Playing Pieces has now opened at Oslo’s MUNCH and will transfer to KODE in Bergen, where it will run from 22 November 2022 to 26 February 2023.
www.nissenrichardsstudio.com

Shrewsbury Flaxmill Maltings has opened after a ?28 million restoration programme. Known as the ‘grandparent of skyscrapers’, the Main Mill structure paved the way for modern-day skyscrapers as the world’s first iron-framed building (built 1796–1797).

The public can now visit the site and its new exhibition, ‘The Mill’, telling the story of Shrewsbury Flaxmill Maltings, its role in the industrial revolution and those who campaigned to save it. 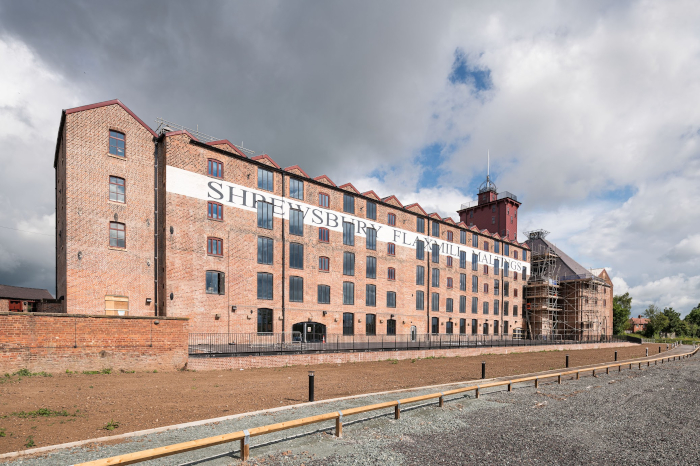 The site, consisting of eight listed buildings, has been closed for the past 35 years and, following Historic England’s redevelopment, four have opened for the first time as a visitor destination and workspace, with Feilden Clegg Bradley Studios the architect on the project.

The works have allowed the site to open for local people, visitors and businesses, and it is hoped the restoration of the remain buildings will commence at a future date.
www.historicengland.org.uk | www.fcbstudios.com