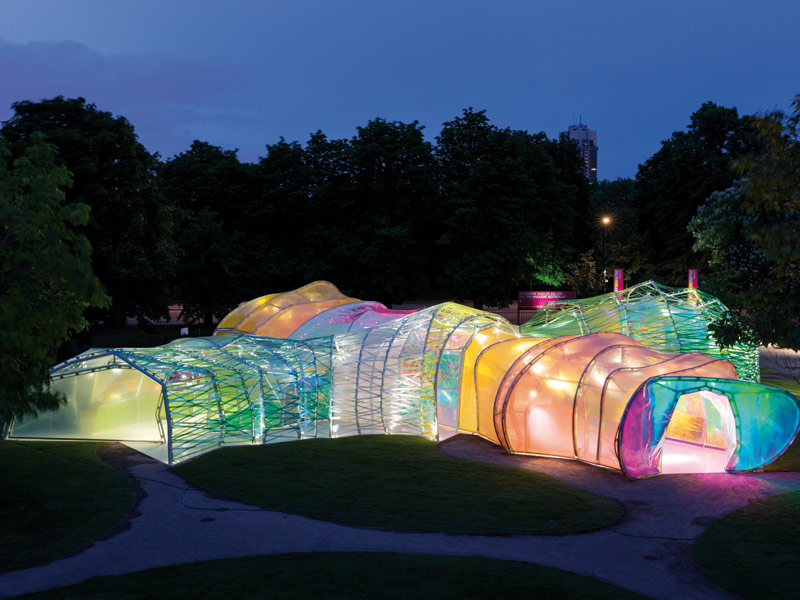 For the Serpentine Galleries’ 15th annual summer pavilion, Madrid practice selgascano has created a kaleidoscopic, chrysalis-like structure drawing inspiration from the constant, chaotic movement of London and the various unique structures that have previously stood on the Galleries’ lawn

It is hard not to smile when greeted with this year's Serpentine Pavilion. Sprawled out across the Serpentine Galleries lawn in London's Kensington Gardens, it's a jolly, technicolour affair - a trippy chrysalis-like structure that glimmers and gleams like a DayGlo worm; it's how I imagine the inside of The Very Hungry Caterpillar to be - the caterpillar which gorges its way through a multicoloured array of foodstuffs before pupating and emerging as a beautiful butterfly. Formed of translucent ETFE panels wrapped around a curved steel structure and weighted by a bright-white concrete floor, it brings an element of carnival cheer to the calm, leafy surroundings for the summer months. 'We like to imagine people entering the pavilion in their best mood, with total freedom - uninhibited - to get the best possible sensations and memories,' says its co-creator José Selgas, one half, along with his wife Lucía Cano, of Madrid practice Selgascano. 'Our aim is to provide a unique experience for all, an encounter not faced previously in other buildings. It's a big machine designed to constantly provoke that experience in a very direct, personal way.' It's certainly one of the most experimental of the past 14 annual pavilions to grace the park since 2000, with its ad-hoc layers and final festive flourish of ribboning. Though it may be less polished than other iterations, and critics may frown at its naivety, when the sun comes out the tent-like structure transforms and the slim passageways, or 'secret corridors', that weave between the four entrances come alive with colour and stained-glass-effect shadows. Inspired by the chaotic flow of London's Underground, selgascano isn't actually too concerned about the pavilion's appearance. 'The final product is not really important to us,' Selgas says, his bright-orange trousers glowing almost as much as the building. 'For us, this pavilion is a whole experiment, a lab that we are using to test a lot of shapes, joints, connections, glues, paints, transparencies, reflections and colours. We wanted to use every possible material that was flexible, foldable, easy to store, transparent and in different colours, all at the same time.' 'Secret corridors' weave in between the four entrances of the pavilion, connecting interior and exterior. Photo Credit: Johnny Tucker

In the end, fire safety, and more probably budget, reduced the materials to a double-skinned polygonal structure of fluorine based plastic (ETFE), but selgascano's child-like enthusiasm can still be seen in the 19 colours printed on to the material, from iridescent soap-bubble effects to crinkled foils and smooth opaque skins. To maintain the sense of light and openness afforded by the ETFE, the delicate steel structure beneath, devised by AECOM, was reduced to a minimum - no beam or column is superfluous. Inside the space is actually quite large - 27m at its widest point - and functions as a cafe during the daytime and an events space for talks and debates. Looking through to another of selgascano's caterpillar segments from one of the 'secret' passageways. Photo Credit: Johnny Tucker

Other selgascano projects are equally colourful and bold in execution. Its own office, completed in 2009, is a curved tunnel-like building, partly buried, in a wood near Madrid. A long, transparent acrylic, north-facing puts staff at eye-level with the surrounding landscape, while opaque fibreglass and polyester provide shading on the south-facing side. A hinged flap at one end can be opened with a pulley system for ventilation and the inside is painted vibrant lime green and cadmium yellow. The pavilion is finished with a criss-cross layer of bright plastic ribboning. Photo Credit: Johnny Tucker

Similar in form is another of its projects in London - Second Home, a collaborative workspace for young, creative entrepreneurs housed in an old carpet factory in Shoreditch. It was completed in November last year, just before selgascano was announced as the designer of the Serpentine Pavilion for 2015 (the only exception to the rule that architects should not have previously built in the UK). Iridescent, foil-like ETFE shines and shimmers on one section of the pavilion. Photo Credit: Johnny Tucker.

For this project - the brainchild of Rohan Silva, former senior policy adviser to the Prime Minister and creator of the Tech City initiative - selgascano created a 2,300 sq m light-filled office space divided up by curvy acrylic walls. A bright-orange restaurant and informal meeting place, nicknamed 'the greenhouse' by the architects and modelled on Richard Rogers' River Café, juts out on to the street like a pregnant belly, while hydroponics feed more than 1,000 plants throughout the building (there's even a plant hospital for bringing sad plants back to life). Inside, an events space and drop-in workspace features a table that can be magically hoisted up to the ceiling for meetings, talks, film screenings and musical performances. In total 19 colours have been printed on to the ETFE membrane that clads the pavilion. Photo Credit: Johnny Tucker

Selgascano cites Luis Barragán and Richard Rogers as inspiration and uses its belief that architecture is secondary to nature to inform its nature and climatology design course at Massachusetts Institute of Technology. Further projects include a skatepark and performing arts space in Mérida, Spain (2011) that features a plastic, 'floating', orange canopy and a vibrant climbing wall; the amorphous, rock-like Plasencia Auditorium and Congress Centre in Cáseres, Spain (2013); and a wavy corrugated-metal vaccination clinic created with students in north-west Kenya (2015) - all characterised by the use of synthetic materials, new technologies and distinctive colours. Says selgascano: 'Colour is just one of the tools we use for a project, and like the rest of them, it's always there. We avoid any prejudices about colour, which is not that common in architecture, or in any other field either. Historically, architects have either used a very restricted palette of colours, mainly white and grey. Colour is a field that most people are afraid of or are unable to move forward from.' One of the trippy entrances into the cocoon-like space, from the Serpentine building side. Photo Credit: Johnny Tucker

Humble and shy in comparison to their architecture - partly down to what they say is their bad English, which really isn't that bad - Selgas and Cano were initially surprised to be asked to design a Serpentine Pavilion. On receiving the letter, they checked with Julia Peyton-Jones and Hans Ulrich Obrist that it wasn't a mistake, 'as there were hordes of architects who were much more capable of doing this project than us!' Conscious of the 14 other pavilions that have gone before, designed by world-famous architects including Zaha Hadid, Oscar Niemeyer, Rem Koolhaas, Jean Nouvel and more recently, Sou Fujimoto and Smiljan Radic, selgascano has made subtle reference to them all. When the sun shines, the floor is dappled with a stained-glasswindow effect. Photo Credit: Johnny Tucker

'The 15th anniversary has been one of the main issues of this project and we have had it in mind from the outset,' says Selgas. 'We see the final result as a tribute to the previous 14 pavilions. The complexity of this pavilion is meant to be a mix of the main ideas that were used in the previous ones.' In the curved structure, elements of Radic's translucent shell-like 2014 pavilion are apparent, while its four-pronged plan brings to mind SANAA's wavy reflective metal roof in 2009, and the overlapping layers mimic Frank Gehry's complex network of glass planes in 2008. Selgascano's pavilion sprawls out in all its multicoloured glory on the Serpentine Galleries' lawn. Photo Credit: Johnny Tucker

As if inspired by the handcrafted feel of selgascano's pavilion, and to celebrate the 15th anniversary of the commission, the Serpentine Galleries has launched Build Your Own Pavilion - a digital platform, competition and host of workshops to encourage young architects-in-the-making (eight to 14-year-olds) to create a pavilion of their own. Selgascano's own pavilion shouldn't be taken too seriously; it's a lighthearted folly that brings a bit of the Spanish fiesta to drab London. Indeed, selgascano describes it as a 'tool to play with' - 'Like any other experience, it should trigger quite a different reaction in each person. The greater the number and range of reactions there are, the more successful the experiment and the more conclusions we will be able to draw from it.' Perhaps then its visceral freedom of form and unabashed use of colour will encourage the next generation of architects far more than the sensible, muted-palette designs that many other architects would have put in its place.