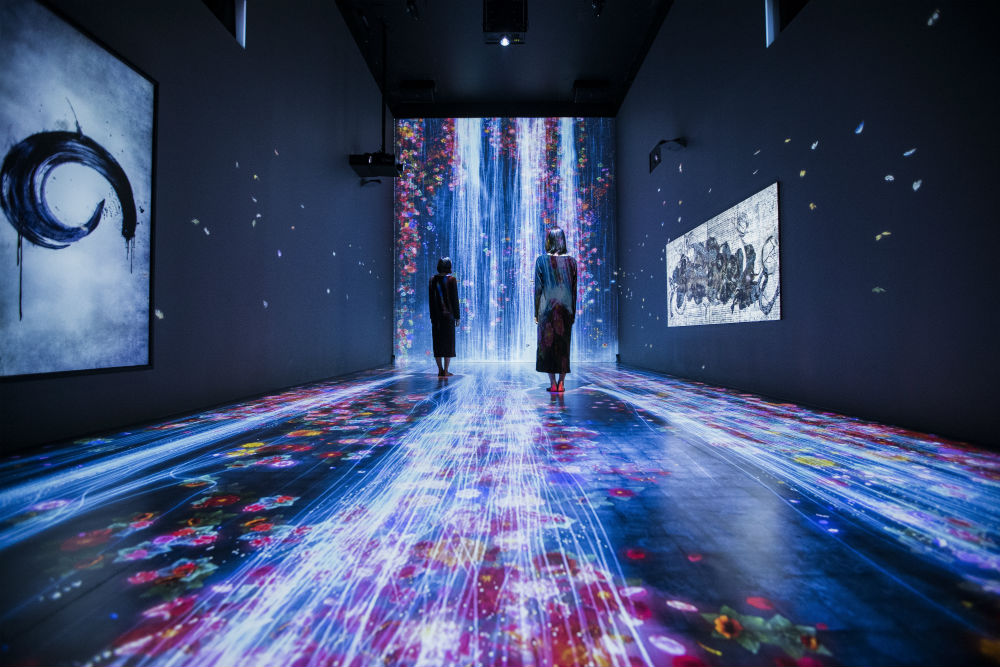 The exhibition explores the role of digital technology in transcending the physical and conceptual boundaries that exist between individual artworks. The installations also dissolve distinctions between artwork and exhibition space, and involves the viewer through interactivity and engagment.

The first and largest room of the exhibition includes six works and features Universe of Water Particles, Transcending Boundaries, a virtual waterfall that extends beyond the gallery wall onto the floor, flowing through the exhibition space and around the feet of the viewer. It engages visitors with the concept of Ultra Subjective Space, which is central to teamLab’s practice.

Visitors are able to engage with the digital art work. The digital images change according to a viewers movements. If a hand is placed on the waterfall, the waterfall will move around the viewer's hands in the same way as a real-life waterfall. Beautiful butterflies fluttering across the exhbition room also die upon touch, another sensory experience onlookers can take part in.

In the second room you will come across a large canvas of moving seas called, Dark Waves (2016) which is a simulation of the movement of waves based on the behaviour of hundreds of thousands of water particles, suggesting an intrinsic connection with nature.

Encompassing the final room, the darkened space is transformed by the presence of the viewer, which activates Flowers Bloom on People. By using 3D scanning technology and people's bodies as a canvas for the projections, flowers are in a process of continuous change — growing, decaying and scattering in direct response to the viewer’s movements.

The public can view the artwork from 25 January to 11 March 2017 at 6 Burlington Gardens, London.

What do you think of the new concept? Tweet us @DesignCurial.