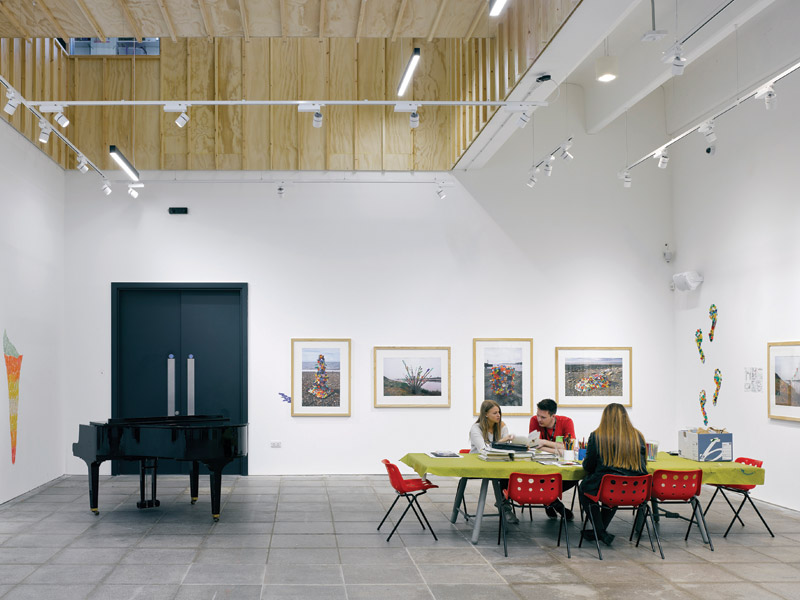 In the heart of Wrexham, Wales, Featherstone Young has created Tŷ Pawb, a market and community arts centre under one roof

Take a struggling covered market below an unlovely Nineties car park and a local arts centre that has funding to expand, and not many local councils would think of putting them together. But just such an unlikely hybrid is gaining traction with the community of Wrexham in north Wales. Ty Pawb (Welsh for ‘Everyone’s House’) may have been born of a particular circumstance — the blending of budgets when Wrexham Council’s regeneration department absorbed its culture division — but this particular graft seems to have taken.

If so, it is thanks to a combination of architect Featherstone Young’s ‘baggy fit’ refurbishment, the inspired programming and outreach activities of Ty Pawb’s artistic director Jo Marsh, and the scheme’s various champions at Wrexham Council and its primary sponsors, the Arts Council of Wales, who fought to see it through, despite some local opposition.

‘Baggy fit’, in essence, means weaving as much opportunity for action and interaction throughout the ground floor, where the new arts centre and market sits. But that’s no easy achievement in what had been a bunker-like space. The work Featherstone Young has done to make the arts centre feel like an integral part of the market, and vice versa, is mostly invisible: it’s through the porosity of the new built elements, the cut-throughs and vistas created across the space, the new public realm designed to animate the in-between spaces and the two new entrances which feed both daylight and customers into the building.

On the exterior, Featherstone Young has used paint and graphics to signal the arts centre's presence in the town. Image Credit: James Morris

The practice has retained as much of the existing structure as possible but revealed it anew with judicious interventions: for example, celebrating the sculptural concrete grid of the ceiling with a coat of whitewash, while adding slim horizontal lights which balance the heaviness of that grid.

A new food court, flooded with daylight from a new southfacing entrance, is flanked on one side by the reconfigured market stalls and on the other by a new line of pop-up street food stalls. Around the corner is a new temporary performance area, its free Thursday concerts cocooned from the market bustle by a removable curtain of PVC strips, flagged up in red and yellow.

Around the west side, another new, glazed doorway leads both to a broad foyer into which performances and events can spill, and the art gallery entrance. The gallery has been created out of a two-storey concrete structure that used to house the mayor’s own private parking garage. Here, the practice has made some judicious incisions: punching a hole in the first floor, inside the gallery, to open up vistas between the floors. The first floor, comprising offices, meeting rooms, shared kitchen and rehearsal space, is accessed via a stairway on the other side of the entrance foyer. But what could have felt cramped is made to feel light and airy thanks to the stripped-back ceilings, white walls and this central void at the core of its circulation over which first-floor occupants can peer thanks to a timber-ply balcony.

The arts centre features two galleries. Gallery 1 is temperature-controlled and suitable for hosting large travelling exhibitions (Grayson Perry is lined up for January). Three windows have been cut into its timber walls to reveal its activities and offer views out onto the market. Gallery 2, at its centre, sits next to a performance space intended to be used for lectures, music, film and dance. A large shop along the foyer wall prioritises the work of local artists and makers. Block work, wire mesh and timber ply are the dominant materials throughout the new arts spaces as well as the market islands.

The budget for this scheme, at £4.5m, doesn’t seem ungenerous (for the ground floor’s gross internal area of 3,705 sq m, and the gallery’s first-floor office and meeting space of 655 sq m). However, says Sarah Featherstone: ‘Probably 40% of it was spent on services and heating and ventilation. Previously, the building was treated as more of an open-air market, so we had to start from scratch with heating and electrical.’

The pragmatic approach with materials extends to the exterior. As Featherstone says: ‘We could have repainted the whole of it in the hope that it would look better, but instead we have used paint and graphics judiciously to signal its presence in the town.’

Into this robust and utilitarian envelope, Featherstone Young and Marsh have infused elements of craft and welcome. Two of the gallery’s walls frame huge new artworks — an annual commission, called Wal Pawb (Everyone’s Wall), it will feature art chosen by the gallery and market traders.

The generous provision of public furniture is also thanks to a public art commission. Large, wooden, demountable sharing tables, benches and stools were all designed by Manchester based carpenter Tim Denton and made along with an assortment of helpers whose efforts Denton co-ordinated via local community workshops. Each helper was given the task of hand-turning a single detachable leg in a gesture that made the task manageable for these mostly amateur volunteers, but which also resonates with the overall Ty Pawb concept of many individual components coming together to form a coherent whole.