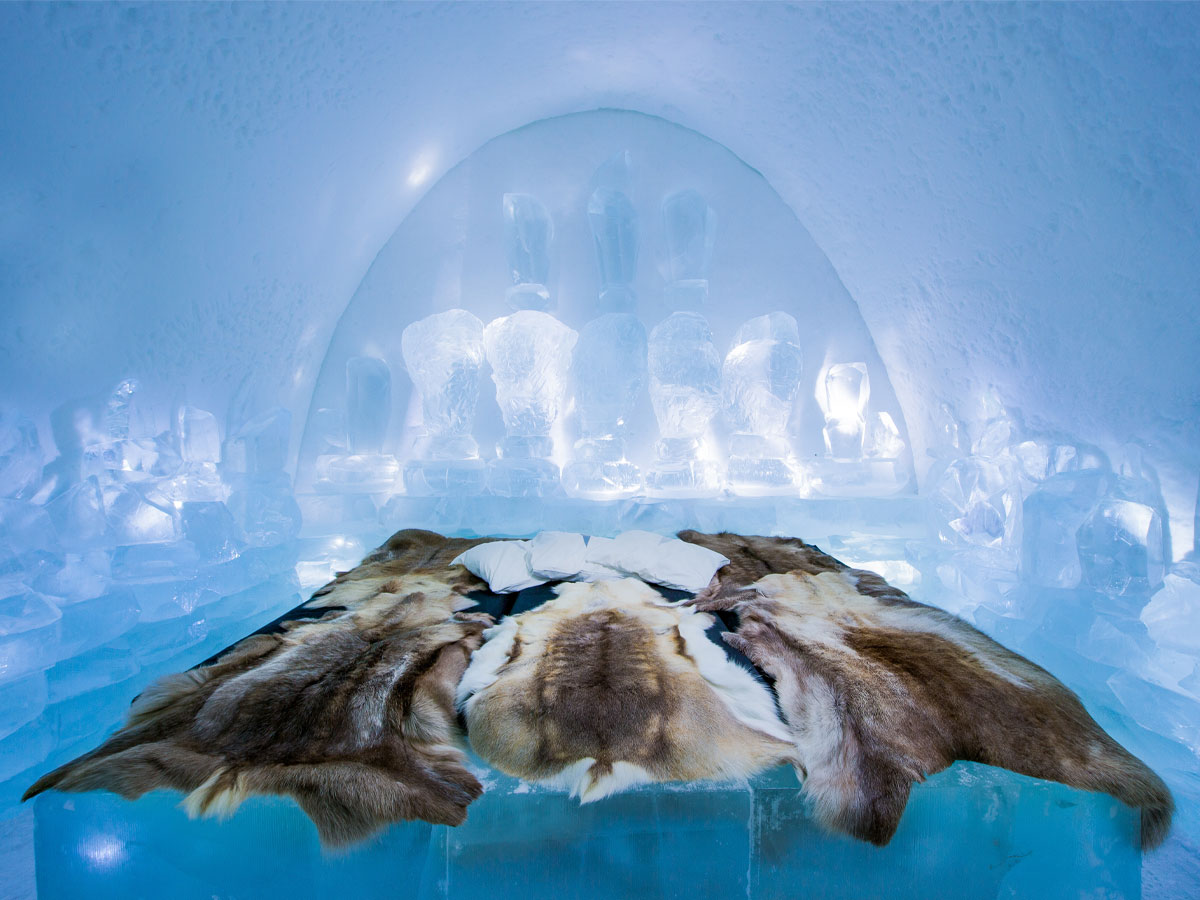 Uncover the spectacular designs such as flying sheep, an African elephant and 1970s love suite for this year's Ice Hotel

A life-sized African elephant ice sculpture, reindeer and chocolate cuisine and a northern lights location app can only mean one thing - this year's original Ice Hotel has opened its doors for the winter.

Designers from all over the world travelled to Swedish Lapland for this year's 26th construction of the hotel. UK-based designer duo Matt Chan (architect) and Annie Hanauer (choreographer) teamed up to create a Cairn Forest suite (see main image). The breathtaking room embodies a woodland scene where rough ice blocks are stacked to create towers and arches that form a wonderful, undulating icy landscape. The idea for the suite is derived from the term 'cairns', a mound of rocks built as a landmark, that act as a way to communicate between travellers and mark out points of interest. Swedish sculptor Anna Sofia Maag has previously worked with the Ice Hotel - creating a unicorn for the main hall in 2014 - but on this occasion directed her attention to the exquisitely-detailed three-metre-high African elephant sculpture, complete with tusks and all. Other rooms are highlighted by a herd of flying sheep, an ancient country manor adorned in ice-carved fabric, an imperial-inspired theatre set and a 1970s love suite that is finished with its very own love barometer. Show Me What You Got Suite by Tjasa Gusfors and David Andren. Photo Credit Asaf Kliger

The Ice Hotel is crafted from Sweden's Torne River, renowned for its fast-flowing and pure, icy water. Just 10 seconds of the rushing river is enough to form the entire hotel, where 1,800 tonnes of ice and approximately 30,000 cubic metres of snice (an intermediate of snow and ice) have been used in its construction. To enhance the experience, the hotel's winter menu has been injected with local influences by Michelin-trained head Chef Alexander Meier. Reindeer with chocolate sauce and sashimi served on ice are just a couple of teasers to get your Arctic taste buds tingling.

Earlier in the year we visited London's only permanent ice bar - in partnership with the Ice Hotel: Ice Bar Rocks, located just off Regent Street. Glasses crafted from the Torne River and a stunning rock chick carved into the ice are just a couple of reasons why this bar is worth the visit.