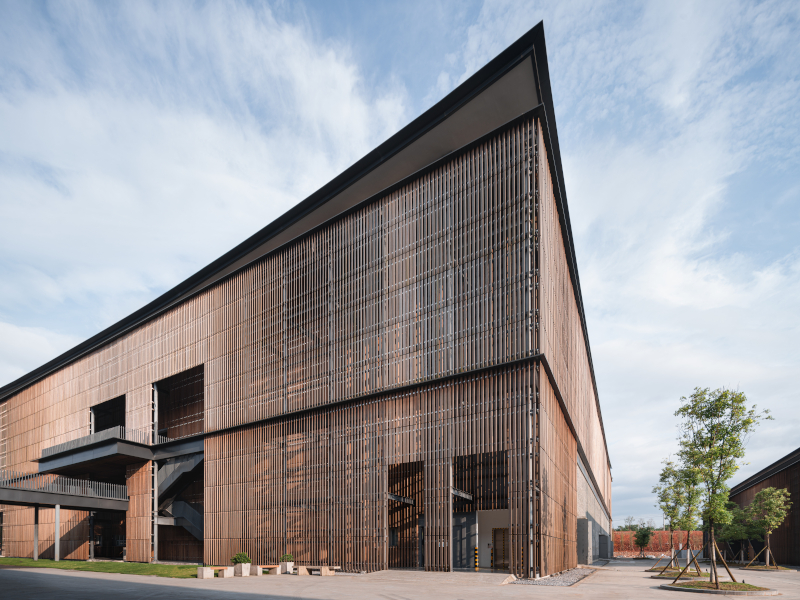 Integral, Guangxi Province, China by Ronald Lu & Partners is a garment factory which uses carefully selected materials to improve the health and wellbeing of workers and the land it stands on

INTEGRAL IS a sustainable and state-of-the-art spinning and garment manufacturing plant, located near scenic Guilin in China’s Guangxi Province. Completed in October 2020 by architecture practice Ronald Lu & Partners, the building is situated in a wetland area on the site of a former brick factory, which had been damaged and left in a poor condition. The architects sought to rehabilitate the land and transform the defunct manufacturing plant by integrating the architecture and landscape with carefully chosen materials. 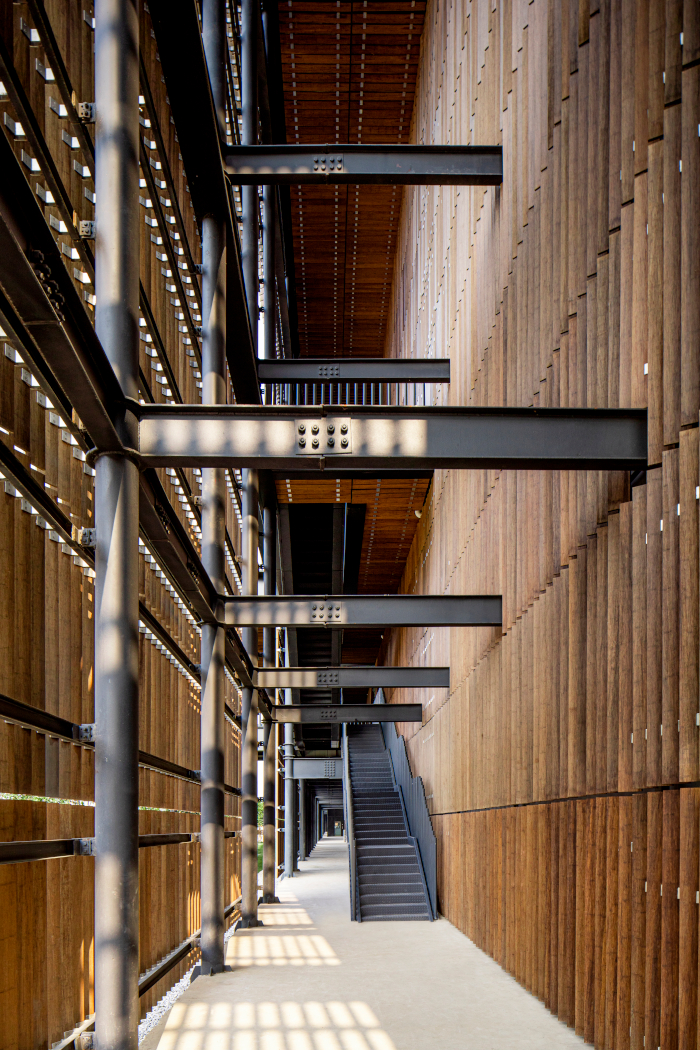 Large bamboo vertical panels are used for the facades of the manufacturing building. Image Credit: RONALD LU & PARTNERS AND ARCH-EXIST

‘The materials chosen for Integral were a fundamental part of this project. We incorporated distinctive blue bricks throughout the development. These bricks, made locally in China, are a part of the heritage and an enduring part of the local architecture.

We also used large bamboo vertical panels for the manufacturing building facades; the bamboo skin allows these structures to blend in better with the natural surroundings, while providing shade for the building to reduce heat gain and improve ventilation in the corridors,’ says Guymo Wong, general manager for mainland China at Ronald Lu & Partners. 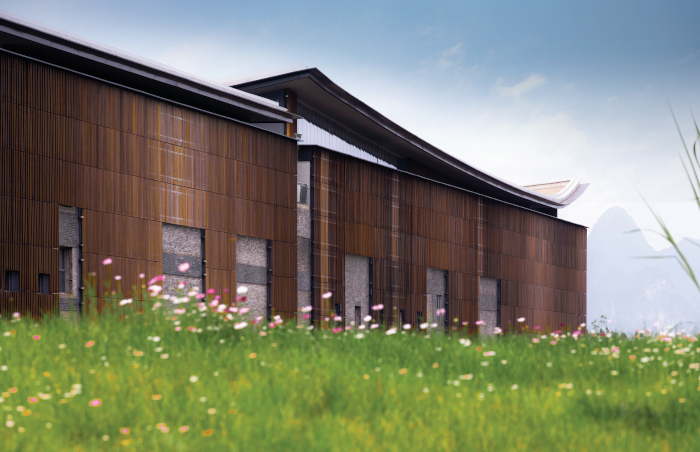 The site is at one with nature and takes notes from the local architectural style. Image Credit: RONALD LU & PARTNERS AND ARCH-EXIST

While manufacturing is still the focus of Integral, the project also includes a botanic garden with natural dye crops, as well as a wetland and eco-tourism functions, with an experience and learning centre that showcases how traditional labour-intensive manufacturing has been transformed by technology into an advanced process that respects workers and embraces local culture. 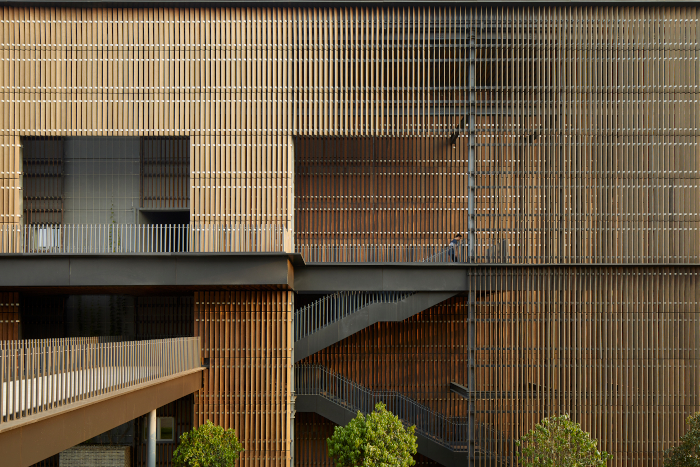 Large bamboo vertical panels are used for the facades of the manufacturing building. Image Credit: RONALD LU & PARTNERS AND ARCH-EXIST

The design of Integral began with studies of the site’s topography and geology. The history and culture of Guilin were also respected, as were the area’s unique landscape features and contexts – reflection, layering, colours and textures. All these elements are tactfully revealed in the building massing and envelope design. Next, the design team began restoring the original wetland landscape. Even before ground was broken, the site was intentionally left alone for a year to allow nature to begin restoring itself. When new plant life sprouted and flocks of egrets arrived, this marked the true beginning of the project. 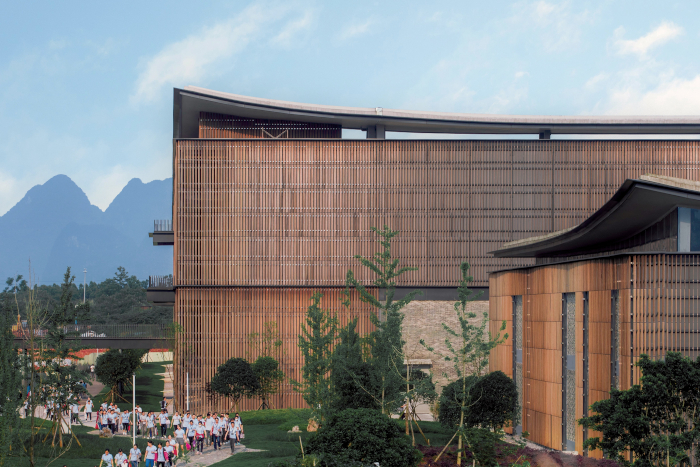 The guiding design principle was to retain as much of the site’s ecology as possible, including the bamboo groves, fishponds and wetlands to the north side of the site. The team placed the larger building blocks on the expansive dry area at the site’s south side, a place that had been degraded by the old factory’s excavation activities. The largest leftover excavated pit was restored to a natural water body, with a small staff dining area situated along the lakeshore, designed to echo the design of the buildings to the south yet remain in harmony with the lake.

Elements of the local architectural language and culture appear throughout the scheme, with distinctive blue bricks and bamboo panels used extensively in the buildings’ exteriors, as well as a large, semitransparent bamboo curtain to soften and break up the building massing.

Plants also cover rooftops, which not only increase greenery but also help to insulate the building to keep indoor temperatures stable. Some of these plants belong to the rooftop farm, which will provide fresh organic produce for the staff restaurant in keeping with the project’s sustainable values.

At its heart, Integral is a human-centred project that has the utmost respect for nature. Integral reimagines how architecture, manufacturing and the natural world can exist together. 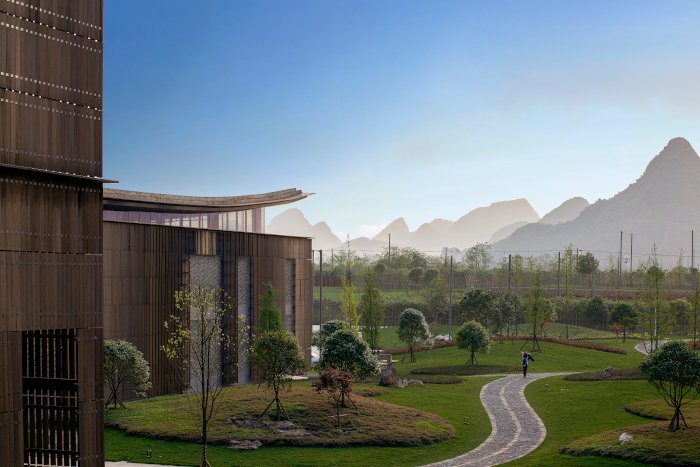 The guiding design principle was to retain as much of the site’s ecology as possible. Image Credit: RONALD LU & PARTNERS AND ARCH-EXIST

The design challenges a certain perception associated with textile and garment manufacturing – traditional, low-tech processing industry characterised by stark, functional and polluting factory buildings. Instead, here is a place where people, technology and the natural environment work in harmony.