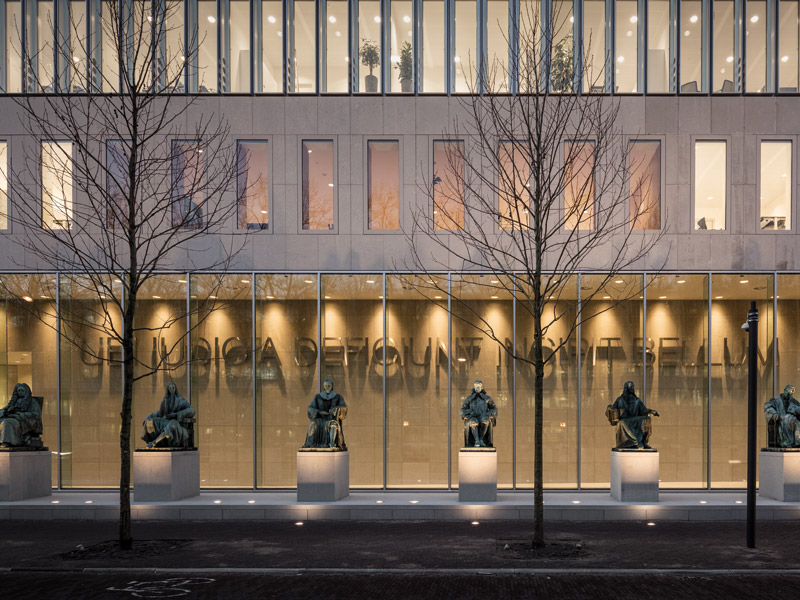 Sandwiched between historical parliamentary buildings and a popular site for mass demonstration, a new building designed by KAAN Architecten in The Hague has found a very fitting location for the country’s Supreme Court. Providing a dignified and elegant addition to its location, while working within very strict parameters as laid down by the state, KAAN Architecten has produced a design that marries both openness and privacy

Elegant and dignified, the new 104m-long, rectilinear home of the Supreme Court of the Netherlands faces on to The Hague’s Korte Voorhout with quiet authority. Sited along this historic, regal route, the contemporary glass box acts as a gateway to the city centre, connecting the cluster of gothic parliamentary buildings, grand royal palaces and international embassies with the Malieveld, a site for mass demonstrations and military parades, and the forested park of the Haagse Bos, beyond.

Its architect, the Rotterdam-based practice KAAN Architecten, has played a delicate balancing act between transparency and privacy, creating an institutional building that is both open to the public and closed in contemplation. A three-storey stone pedestal provides a sturdy base for the verticalfinned glass box, while 6m-high windows connect the building with the Korte Voorhout at street level.

The main entrance is marked by six pensive, bronze statues of legal scholars that single this building out as something rather more important than its otherwise anonymous facade might initially suggest. Void in the ‘house’ or domain of the procurator general’s office. Photo: Fernando Guerra | FG+SG

‘A Supreme Court has a dualism to it; it’s an institution with a very important public function, but on the other hand the justice work has to be done behind closed doors,’ says KAAN Architecten founder Kees Kaan. ‘The building is transparent but it does not give away all the details. Like the statues, it has a stone base where we put the public programme, and on top is the wig, where work is done in seclusion. Seemingly you can see everything, but at the same time of course you see nothing.’

KAAN Architecten won the competition for the Supreme Court in 2010, after its former city-centre location in the palatial townhouse Huis Huguetan (1734) was deemed unfit for purpose. Occupying the site of a demolished French Embassy building, around the corner from Marcel Breuer’s 1959 American Embassy, the new building’s footprint, height and even the shape of the envelope was already predetermined by the state, leaving little room for experimentation or deviation from the brief. ‘It was very precisely done, every square metre had to be used properly,’ says Kaan. KAAN describes it internally ‘as interlocked as a Swiss clock’, with intersecting circulation routes to direct the public, escort detainees and protect the justices from view. The public areas are laid out on the ground floor, with double-height reception areas and press conference rooms wrapped in grey limestone. In the middle sits a large 400-seat courtroom, with a smaller 80-seat court to one side. Both are given a sense of grandeur with a backdrop of translucent, veined alabaster.

The upper four levels accommodate a library and restaurant as well as conference rooms, meeting chambers and modular offices subdivided into three ‘houses’ or separate domains, each with their own identity and function for the court’s council, procurator general and president. Each section centres on a void that brings in natural light and can be differentiated by the use of material; a bold, vertically striped Marmara Equator marble in the council, a deeply veined Skyline marble for the procurator general and a clean, stark, white marble for the president. The marble is given weight and substance by deep, low balustrades with in-built seating areas. Says Kaan: ‘By developing that void, it upgrades a generic office environment into something that is fitting for the character of the Supreme Court.’

KAAN has succeeded in creating a classic, graceful building that feels like it has always belonged in its location. It is a quiet, contemplative building, as KAAN says, ‘with both feet on the ground, in the midst of society, and its head amid the clarity of facts and knowledge.’