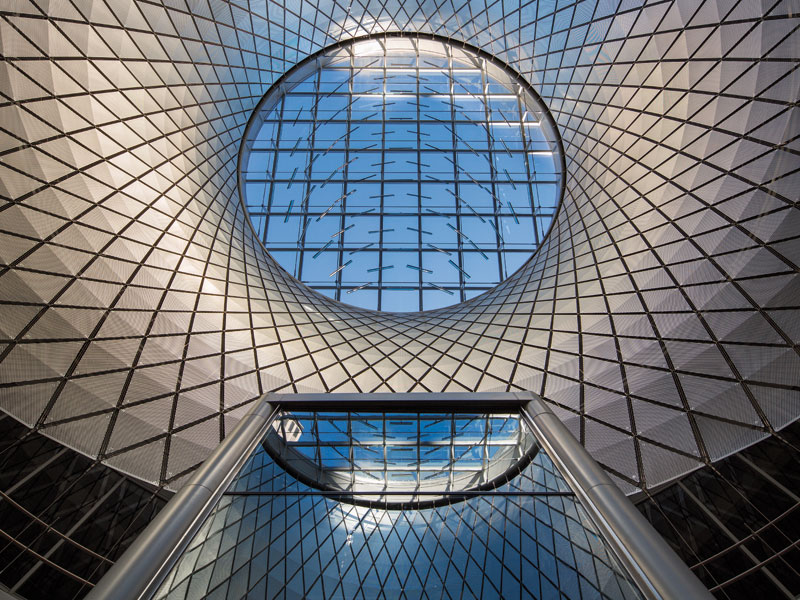 Two daylight projects, both involving Arup, are unique – one designed to let the sunshine in and one that goes back to cultural roots to screen it out.

As part of the regeneration of the World Trade Center site and its environs in the aftermath of 9/11, 2001, the Metropolitan Transportation Authority (MTA) has redeveloped one of New York's transit hubs. A convergence of 11 city subway lines carrying more than 300,000 people daily, it sits on the corner of Fulton Street and Broadway, one block east of the World Trade Center site.

Transforming what had devolved into a dense tangle of inefficient connections, the aim was to create a spacious multi-storey pavilion structure, incorporating retail, that would crown the new underground pedestrian network and form a landmark gateway to Lower Manhattan. An eight-storey-high conical dome is an exterior focal point of the new Fulton Center transit hub, part of the World Trade Center site regeneration. But a unique lighting system sits below the dome

Forming the project's focal point is a canted 16m-diameter circular skylight known as the oculus, which brings sunlight and daylight through the building to the subterranean levels beneath. The effect of the natural light is magnified by an integrated artwork, the Sky Reflector-Net, a steel cable-net structure that forms an independent reflective lining, offset from the dome's interior and directing sunlight downwards. The concept was created by James Carpenter Design Associates (JCDA), and its design and development was down to an engineer/architect/artist collaboration between Arup, Grimshaw and JCDA. The oculus and reflector-net together provide sufficient illumination to the building interior to allow electric lighting to be turned off during the day. 'From the inception of the project, light and daylight played a critical role in this re-envisioning of the transit hub by acting as a key wayfinding element,' says Arup lighting associate Matt Franks.

To determine the best location for the oculus, the design team first studied the solar geometry of the site to find out to what degree the surrounding buildings would overshadow it. Daylight studies influenced the location, height and angle of the skylight. As a result, the structure is located towards the northern corner of the site and tilted gently towards the south to allow more direct sunlight to enter. During summer months this penetrates as far as two levels below ground, so that passengers step off subterranean platforms into daylight. The skylight is also open to diffuse light so that adequate natural light is provided when the sun is obscured by clouds.

The reflector-net structure features nearly 1,000 perforated reflective panels made from a custom-designed semi-specular aluminium coating. This dynamically reflects both the direct sun and diffuse light as both exterior conditions and viewer position change. The coating has been specially designed to avoid dirt and dust accumulating so that the visual quality of the installation can be maintained. Inside the Fulton Center a 16m circular skylight, called the oculus, intersects the dome. Its Sky Reflector-Net skirt (above), an artwork and independent reflective lining, catches and amplifies incoming light and daylight enough for it to penetrate two levels below ground

The surface finish of the panels also allows for subtle direct reflections without direct glare from reflected sunlight.

Additionally, glass panels, called parasols, reflect small amounts of direct sunlight on to the interior of the reflector-net structure, adding a dynamic sparkle of movement during the times when sunlight enters the oculus.

Where the artificial lighting was concerned, the positioning of the fittings had to be very precise. Computer modelling determined the aiming of luminaires for the reflector-net structure and revealed how the qualities of the material affected illumination. The azimuth and altitude angles of each fixture were recorded directly into construction documents to ensure an accurate and more straightforward installation process.

To help with the fixture aiming, the design team created custom-designed brackets with multiple points of adjustment.

'The result is an even illumination of the interior of the reflector-net, which in turn illuminates the interior of the space with indirect light, which provides all of the illumination required in the centre of the space at night,' says Franks. The metal halide light sources can easily be changed from a catwalk that runs continuously around the top of the reflector-net structure, allowing for easy access to each fixture from behind. Metal halide was chosen over LEDs partly because of the protracted nature of the project, says Franks. 'But had it been a quicker project we probably would still have used metal halide since it is much easier to maintain.

If we used LED, failed fixtures would likely need to be completely replaced - with what's available on the market today - rather than just replacing the lamp.'

Another striking element of the building is the transparent vertical exterior facade, which provides a visual connection to the exterior at street level and the city beyond. 'Subtle illumination on the dome exterior at night hints at the key feature of the space,' says Franks. 'The transparent facade allows the interior to blend with the exterior in a seamless experience.'

Daylight Analysis
The design team began with a three-dimensional model of the site to determine solar access. Investigating the sun-path geometry around the site using inverted sun-path diagrams allowed the team to determine at what times the sun could potentially be blocked by surrounding buildings.

The team produced solar animations for three key days - 21 March (equinox), 21 June (summer solstice), and 21 December (winter solstice). These provided an understanding of the shadow patterns on the site throughout the day and year, and led to the location of the oculus towards the north of the site, where it would be least obstructed and literally overshadowed by surrounding buildings. This analysis was further developed by looking at an annual analysis of potential solar exposure, which confirmed that the northern edge of the roof was best for a skylight location.

Once the location of the skylight was determined, the next step was to understand the solar exposure on the inside of the building, as well as exposure to diffuse daylight when no direct sunlight was available. This confirmed that daylight alone would be adequate on most days without the need for supplemental artificial lighting.

'A key driver of the design was to illuminate as far down below in the station as possible with daylight and direct sunlight,' says Franks.

'Further daylight analysis confirmed that for portions of the summer months direct sunlight would reach down to the concourse level of the station - two stories below street level - reinforcing a key wayfinding element in the space.'