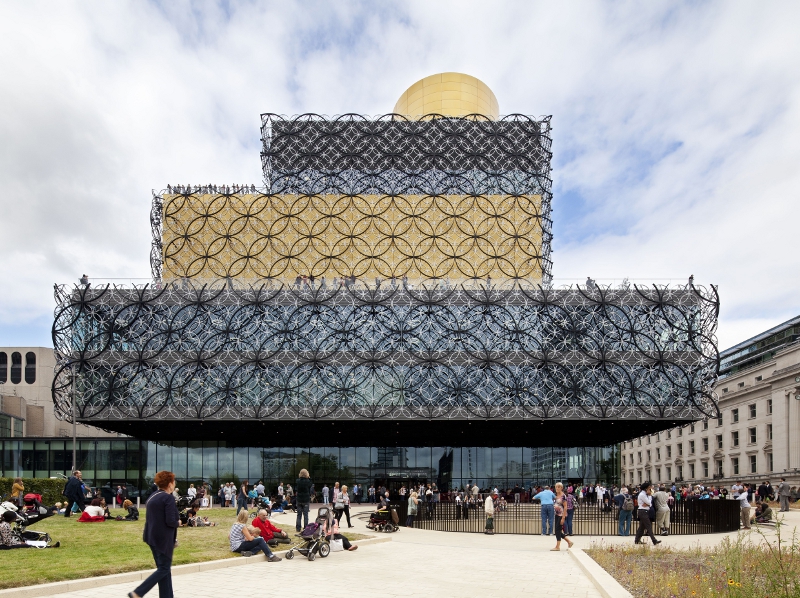 Not surprisingly, half of these buildings have been featured as in-depth studies in Blueprint, with two of them, the Shard and the Library of Birmingham, making the cover. This year's shortlist is a mixed bag for sure, from the iconic offerings of Renzo Piano (The Shard) and Zaha Hadid Architects (the London Aquatics Centre), and, it could be argued, Mecanoo's Library of Birmingham, through the two interesting educational interventions, O'Donnell + Tuomey's intricate and bold LSE building and Feilden Clegg Bradley Studio's hardworking extension of Manchester School of Art, to the thoroughly pragmatic and quite understated (except for the facade) work of Haworth Tomkins' Everyman Playhouse. The Shard is a very dramatic addition to the London skyline that works so well and looks so different depending on where you view it from and when, but it's pretty much empty and, as such, is a symbol of how big money is currently running riot in London. There was a different kind of big money behind Hadid Architects' Aquatics Centre, which, now the wings (the two stands that held seating during the Olympic Games) are off, is a visual treat outside and an extremely dramatic experience within. So, that would be up near the top of my list. Mecanoo's library is a series of wonderful volumes from within - but from outside, it's a little 'John Lewis Leicester' for my liking.

The Everyman Playhouse is a lovely job, a rebirth of one of the city's treasures, but doesn't thrill, and neither does Manchester School of Art.

So for me, at the top of my list is the complex intervention into a difficult space, with dramatic form, that is the Saw Swee Hock Student Centre at the LSE.

To be honest the shortlist this year leaves me quite cold. Perhaps it is because I haven't visited any of the buildings, but the majority of the projects are somewhat flashy, ostentatiously showing off their height or their chiseled curves. Zaha Hadid's London Aquatics Centre, inspired by the fluid geometry of water in motion, is a beautiful thing - now its wings have been removed. But Hadid waited until the building had been freed of them to enter it into the competition. Because it was designed as a flexible building for after the Olympics as well as during, it seems a bit superficial to enter it now, two years later. The Shard, on the other hand, at over 300 metres, is a massive feat of engineering and design, but rather an unnecessary addition to the city, at least in some people's opinion. This could divide the judges' opinion. My dislike for the Library of Birmingham by Mecanoo comes in part from its blingy facade, and partly because building it involved the unnecessary demolition of the old brutalist library by John Madin. That leaves the Manchester School of Art, The Everyman Playhouse in Liverpool and LSE's Saw Swee Hock Student Centre in London, all three of which seem to have understood their respective sites and users' needs. If I had to put a bet on, it would be on O'Donnell + Tuomey, simply because it has been shortlisted for the Stirling on four previous occasions, without winning the prize. But I fear, rather predictably, that it will be Zaha taking home the prize.

The Library of Birmingham by Mecanoo 'The people's building': The Library of Birmingham, by Mecanoo. Photo: Paul Raftery

Zaha Hadid's curves are stunning, O'Donnell + Tuomey's angles astonish - either's 2014 nomination is Stirling-worthy. But there are two other entries this year that are not just great architecture, but actually visibly transform the entire city each stands in. That's an achievement of a bigger magnitude. The Library of Birmingham, by Mecanoo. Photo: Paul Raftery

Even those who don't like skyscrapers in London usually concede that the Shard is fantastic. Who can argue with its strange achievement of simultaneous crystalline clarity and unexpected intricacy as different facades create drama and detail in their differing angles and apexes? Some criticise the way it interacts with the ground. What a bogus argument for a building that calmly integrates into a great railway station, and brings light down into it, plus sweeps people up from the pavement with escalators! But is it the vertical city that Piano talks about? Maybe not. 'Even those who don't like skyscrapers in London usually concede that the Shard is fantastic': The Shard by Renzo Piano Building Workshop. Photo: Michel Denance

The Library of Birmingham, on the other hand, delivers on all promises. It was to be a building for the people and in a city still blighted by messy, mediocre, motor-orientated post-war thinking, it would bring culture and learning onto centre stage. Like the Shard, it transforms its skyline, but with that almost forgotten sub-trend called stack architecture. It's like boxes piled and gift wrapped real special - the filigree metalwork and the golden cylinder on top have such class! The Library of Birmingham, by Mecanoo. Photo: Paul Raftery

Inside, the sequenced rotunda voids are spatial drama that its escalators turn into live performance. And those great garden terraces floating above the city are green platforms that offer spectacle for anyone, not just those who pay. I'm backing the people's building by Mecanoo. For me it's the Everyman Playhouse in Liverpool, by seasoned archi-thesps Haworth Tompkins - a wonderful re-addition to one of my favourite British cities after London. The Everyman's shuttered concrete geometry speaks of the ambition, clarity and solid gravity characteristic of Festival-era Brutalism, with more modesty and polish. I love the two fat brick maritime chimneys, which allow natural ventilation in throughout the building; Antony Malinowski's freehand ceiling paintings and the iridescent tar-like tiled splotches of bar splashbacks are both delicious details. More important than all of this, though, is the way the building gives itself to its users: visitors are given cues to use the space as they wish, adapting conditions of light, privacy, voyeurism and performance. This echoes Lasdun's idea of the audience as performers -- yet there's ample flexibility on the actual stage as well, for the professional players. The original theatre was such an important cultural barometer for Liverpool, borne of passion and civic pride -- Steve Tompkins' memorable anecdote about the taxi driver who warned the architects "Don't f**k it up, or your f**king f**ked," says it all: Liverpudlians, whether on stage of on the street, have a lot to say about their city. Their visceral concern is aptly reflected in the façade, with its 'cut outs' of local citizens etched out of thick aluminium sheet -- it wouldn't work nearly so well in any other city. The involvement and implication of Liverpool's public in the resurrection of this Hope Street beacon explain why this building wins my vote, but the great thing is that I doubt the Liverpudlians will mind even if I'm wrong; they will love the Everyman anyway