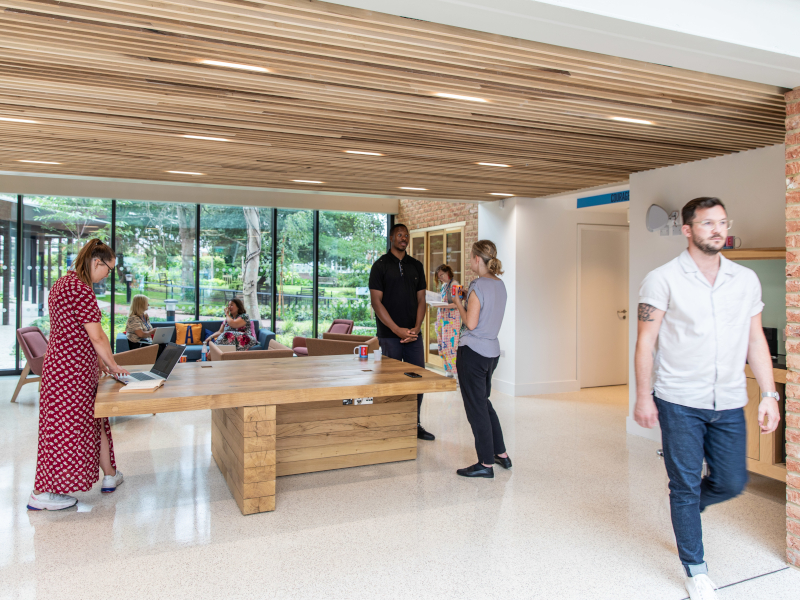 ST CHRISTOPHER’S HOSPICE, which has been at the forefront of holistic palliative care since it was founded in 1967 by Dame Cicely Saunders, has taken a major step towards expressing and enriching the close relationships it forges with patients, carers, professionals and the wider end-of- life care community thanks to MillsPower’s graceful and welcoming new education and support hub at its Sydenham headquarters.

The L6.5m (construction cost L5m) Centre for Awareness and Response to End of Life (CARE) is a three-storey building, which sits at the southern end of the midcentury, mid-to-low-rise sprawl of the original hospice and HQ. It includes a large lecture theatre that can host 120 or be subdivided into three smaller teaching spaces. There are multiple meeting rooms, a library, a digital support area, a skills lab, offices for the education and nursing teams and even a landscaped roof terrace for the enjoyment of staff working in the building or in the adjacent, three ward, 38-bed hospice, as well as visiting professionals from the charity’s worldwide network of palliative care specialists who (when pandemic restrictions allow) attend regular lectures and symposia. 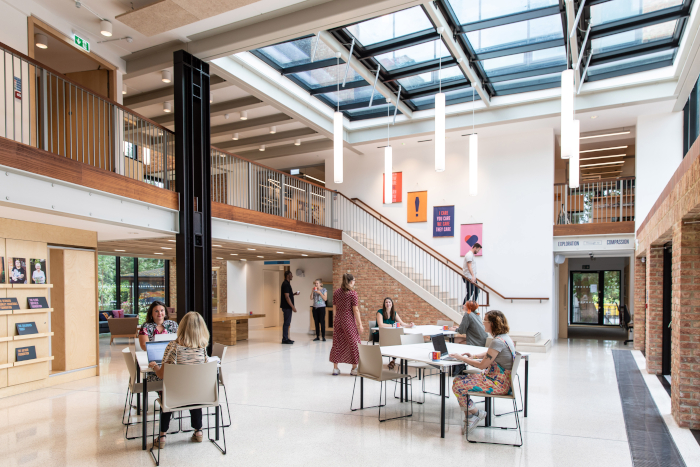 The double-height dual-aspect foyer of the hospice allows for light, shade and shelter

While its architecture communicates a pleasing, civic presence, it also creates a crucible of connectivity across the site and community, and that includes carers and family who are visiting their loved ones in the hospice. The wards are arranged around a large, mature garden, with the new CARE centre forming a fourth, semi-enclosing boundary. But the large windows at the front and full height glazing at the rear of the new building make it feel as if the gardens continue within and beyond the CARE centre, thanks to attractive new planting along the building’s southern facade.

Soft-toned, variegated brick walls are nicely interspersed with honeycombed brick sections across windows to minimise solar gain, but also bring dappled sunlight into the interiors. There is a sculptural interplay of apertures of varying heights and scales, according to orientation and purpose: domestic-sized squares allow plenty of daylight in to meeting rooms while reducing distraction. Along the west elevation, giving onto the lecture hall, slender apertures allow slices of daylight while narrowing views. And in the midsection, animating the large, double-height, dual-aspect foyer, the windows echo the deep ground floor colonnade, which brings shade and shelter – in the form of window seats – into this south facing façade, with larger windows at first floor level wrapping back over the atrium skylight. Says co-founder Mark Power: ‘We wanted to make the building feel like it’s wrapped in brick and that it forms the enclosing continuity of the building. With the apertures we wanted to make sure they are only where they need to be and there is no superfluous detail. Then the big windows are a way of presenting the education centre to the rest of the hospice.’ 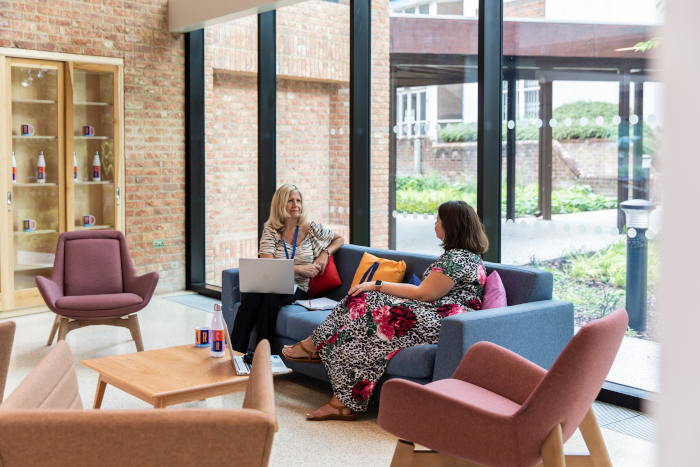 The lovely, warm brick continues on the inside of the building to reinforce that connection between outdoors and in. Across the rear garden, a new covered walkway links the CARE centre directly with the hospice. And it’s this proximity that the St Christopher’s team feels has already done wonders to draw the communities together.

Jenny Fogarty, lead for St Chistopher’s Care and the driving force behind this new CARE space says it’s about saying to people: “Come and ask your own questions, tell us what you want to learn.” ‘What we want is for people to start thinking: my mum is getting older, and St Christopher’s is running skills workshops, so I can learn what I need to be able to give her a hand. We talk about St Christopher’s being a place where people can come to prepare for death as much as they would prepare for birth… That potential to bring need and opportunity together in one place is what we’re excited about with this space.’ 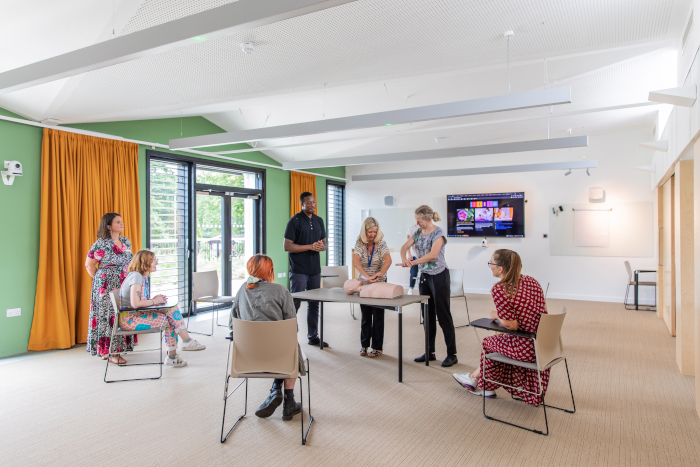 MillsPower became involved almost eight years ago when the charity decided that the education building they had constructed in the 1970s – a bulky, seven-storey, concrete structure – no longer met their needs. It had only one lecture theatre, and the rest was given over to offices. It also felt very separate from the hospice, with a car park wedged in between. MillsPower co-founder Phyllida Mills says: ‘It cost about one pound difference to refurbish or build new. But to give them the spaces they needed there was so much we would have had to do with the old building. The advantage of a new building was that we could set it closer to the hospice, and move the car park to the edges. We basically swapped them around.’ A further advantage of keeping the old while constructing the new was that the old block was still usable right up to the moment of completion. A Network Rail tunnel runs across the site, and only 4m below the surface. This guided the placement and shaping of the new CARE centre as an elongated oblong, its south elevation running right along the edge of the tunnel. The amount of space required pushed the new building closer in to the hospice garden.

Apart from the practical and educational considerations, the architects were also very much influenced by Dame Cicely’s writings. Says Power: ‘She wrote that you (as a patient) matter in every moment of your life, even to the last moment. So that was important for us to provide a variety of places to be in different modes, to facilitate different sorts of conversations.’ 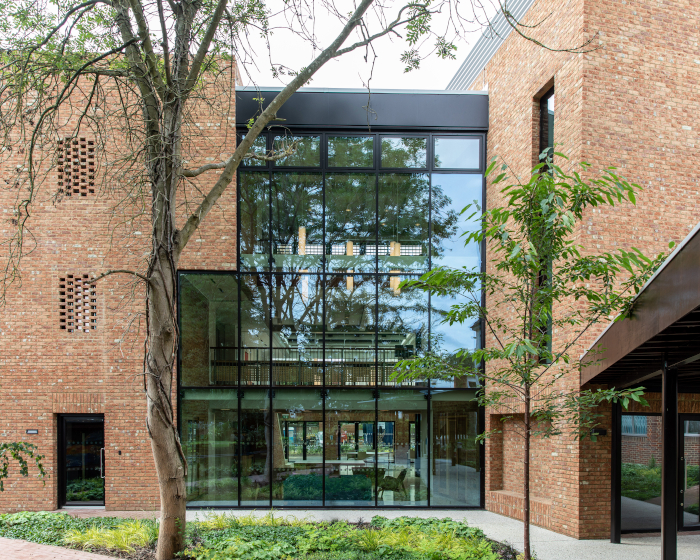 The bright, open atrium is entirely visible from the rear garden entrance

For Power, the trick was ‘also about how spaces that might be essentially clinical or institutional could be made more domestic in feel, through use of materials and also through thinking of almost the corner rather than the room, so that the corner provides you with that sense of enclosure and wellbeing but is no less open to the wider world.’

There is a legibility and freedom of movement in and around the building. The ground floor has a wide and welcoming foyer at its heart. The aforementioned lecture theatre sits behind this foyer, to the west and immediately accessed via the entrance. Smaller, discrete meeting and discussion rooms are tucked around the north and eastern edge, with windows out onto restful lawns and mature trees.

There is no formal reception area but there is a desk, which is fully mobile and doubles up as a bookshop. Says Power: ‘The foyer space can be reinvented to suit particular needs.’ A key decision was to place offices on the first floor, with further teaching spaces on the top, so that St Christopher’s staff would still feel very much at the heart of activities. He adds: ‘It also creates an informal backdrop for events that might take place in the atrium.’

As for the interiors, the landscaped setting is complemented by the natural colour palette that plays across the interior in blocks of colour. Here, there is a combination of the St Christopher’s logo colours of green and blue.

Naturally, the pandemic has impacted on client and architects. But it also forced a change in the way the charity provides education, with many courses going online. And importantly, it raised our awareness of all the issues around death and bereavement that we, in the UK, usually prefer to ignore.