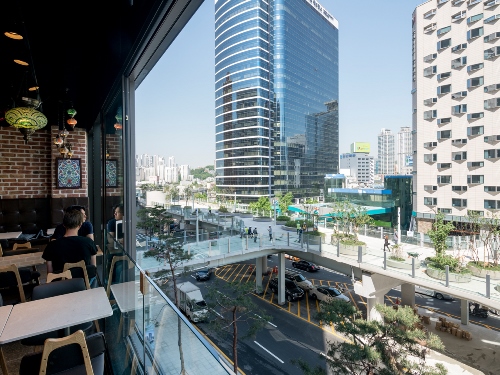 The former city highway, raised high above the city was scheduled for demolition before this project was proposed. The vastly ambitious venture has been designed by renowned Dutch Architects and designers MVRDV.

The Skygarden is just one step along the way to making the city of Seoul more pedestrian friendly. The grid of 16-metre tall concrete bridges have been given a new lease of life, with unique and modern design elements, oodles of glass, blue LED lighting and cylindrical planters.

The Seoullo 7017 area is also home to many shops, restaurants and hotels, and improvements to the site, including more ‘satellite’ gardens and more connections to street level are in the pipeline for the future.

The kilometre long 1970’s highway is now home to 24,000 plants of 228 different species and it will become the largest collection of Korean plant species in the city. The plants grown in this ‘urban nursery’ will finally be transported to other areas of the city, in an attempt to increase the greenery of the whole city.

The 983-metre-long park spans the centre of the city, from Namdaemun Market to the districts of Malli-dong, Jungnim-dong and Cheongpa-dong. The Skygarden project was approved in 2015 and work was started almost immediately. A mere two years later the mammoth project was opened to the public.

The Seoul Skygarden cost $40 Million to create. This is a stark difference to the $200 Million estimate for the similar London garden bridge project - Which has since been scrapped. There are also many similarities with the Skygarden and New York’s famous ‘High Line’ the 1.5 mile-long elevated park on an abandoned railway line in the New York City.