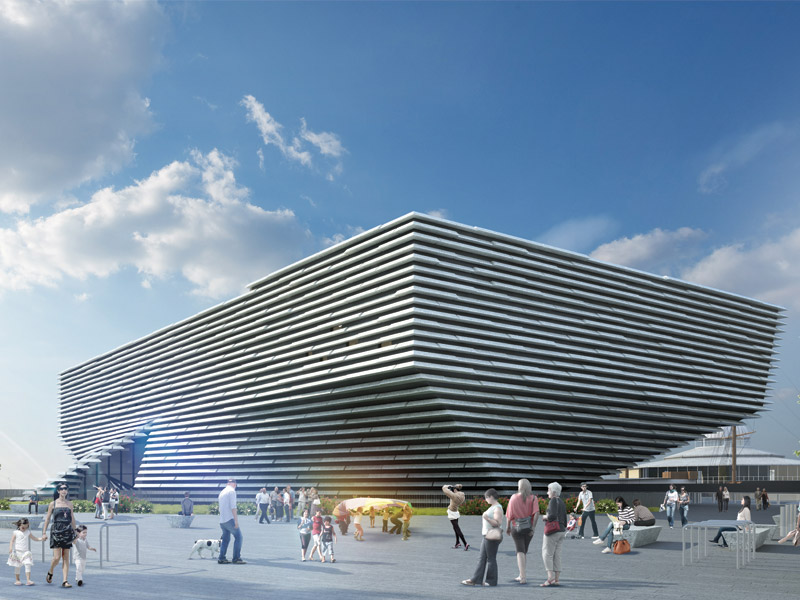 With the V&A Dundee to open in 2018 the city of Dundee is getting ready to show its historic and modern design and cultural credentials.

The people of Dundee know a good thing when they see it. By day two of the city’s inaugural Dundee Design Festival in May this year, the signs were clear: from conversations in the queue for the loo at the Pecha Kucha night – a stranger turning to me, beaming, and saying ‘this is great, isn’t it’ – to the jam-packed Pecha Kucha auditorium, filled with 400 people who had come to this former DC Thompson West Ward printing works, to hear an assortment of writers, academics, artists, entrepreneurs and makers celebrate the inventiveness, resilience and spirit of the city. The same thought occurred to me as I sat in the quirky, warm wood kitchen of the Maggie’s Cancer Care Centre, up on the campus of Ninewells hospital, keen to experience its mold-breaking design.

Opened in 2003, the first new build Maggie’s in the UK was also the first-ever building in the UK by American starchitect Frank Gehry. And although there was initial resistance to the idea that a healthcare building should cost so much (£1.3m, all of it raised by the charity), once its door was opened, nobody was carping about the undeniable sense of calm and nurturing that enfolds you the minute you enter the dragon’s wing embrace of its undulating roof. Its popularity has grown steadily – from the 20 to 30 people a day who once came to it for solace, psychological support and practical advice to the 50 to 70 (and sometimes 90) who use the facilities daily now. This spirit was summed up nicely by Festival organizer Siôn Parkinson’s heartfelt speech on the opening night, when he praised the city and all the people who ‘just said yes’ every step of the way.

The Design Festival is Dundee’s way of planting its flag in the sand and saying yes to all the fuss and fanfare – and flack – that will come along with the opening of the Kengo Kuma-designed V&A Dundee in 2018. The first V&A outpost beyond London, the contract to host it was won fair and square, by a city that has a hell of a story to tell about the role of design and inventiveness in its own history. It may be a less well-known story than Glasgow’s, but that was undoubtedly also part of the appeal for the V&A committee. A museum here would make more of a difference. Already the building is emerging from the harbour: a bird’s-nest of spikes and spokes protruding from the ground to support the angled planes and curves of Kengo Kuma’s monumental, yet somehow humble, structure. The V&A is obviously one of the key civic buildings in the mission to raise Dundee’s profile as a creative, entrepreneurial city. The other is Dundee Council’s new HQ, Dundee House, which sits at the west of the city centre. The hope – according to architects Reiach and Hall – is that between these two a new heart will be created in the city, currently dominated by the still handsome remnants of the city’s Victorian civic heyday (as a worldwide centre of jute production and whaling), a generous smattering of derelict mills, and one underutilised shopping centre from the Eighties. Although the Dundonians are not fond of their modernist buildings, this one makes a bold gesture: an attempt to marry the craftsmanship and delicacy of its Victorian past with a classic/modernist aesthetic.

Driven by the tireless enthusiasm and energy of Dundee City Council’s director of leisure and communities, Stewart Murdoch, the city has already claimed the crown of the UK’s only UNESCO City of Design (in 2014, along with Bilbao and Helsinki). In order to achieve that status, a city has to demonstrate a thriving native design industry fed by design schools and research centres, and practicing groups of creators and designers. This can’t have been hard to do. Dundee has a long and illustrious history not just for textiles and engineering, but also medical research – with a regional teaching hospital on its fringes, married ever more closely to the cutting-edge research conducted at two high-ranking universities (Abertay and Dundee’s own), its contribution to medicine in the past 100 years ranges from the development of aspirin to hundreds of new cancer drugs. In publishing it has long been the home of the Beano and Dandy, driven by the still beating heart of DC Thompson (whose local paper The Courier, with six regional editions, is among the top-ranking regional paid-for newspapers, by circulation). And its place in the pantheon of video game design is assured, with alumni from both Abertay and Dundee universities’ game-design courses (creators of Lemmings and Grand Theft Auto) helping to establish the city at the forefront of Scotland’s game design industry. Furthermore, in Duncan of Jordanstone College of Art and Design (DJCAD, established in 1892, and now part of Dundee University) Dundee has one of the UK’s top art colleges. All it has to do now is make that DNA visible. Spending time in Dundee during the Design Festival, a clever layering of events combined to demonstrate a critical mass of culture that cannot fail to impress the interested visitor.

The festival was timed to coincide with DJCAD’s degree displays – visitors, town councillors, students and staff piled into the building on the festival’s first night, for dinner and a degree show. It was also timed to coincide with an advance showing from the NEoN festival, an annual celebration of digital arts (its seventh outing will be 9-13 November 2016), which took the form of a pop-up screening room in the city’s admittedly down-on-its-luck Wellgate shopping centre. This casualty of the Eighties design – all white stiletto structure and striplights, whose anchor tenant BHS was holding its final summer sale – has long been happy to let the city’s creatives throw cultural curve balls at its customers, from pop-up dance to cinema. Festival director Donna Holford Lovell said the centre owners had been more than happy to host this inflatable screening room, complete with blow-up clouds, where curious customers could sample the latest cutting-edge video and film art while flopped out on beanbags, their baby buggies parked just by the inflatable igloo’s front door. The annual, month-long Ignite Festival also scheduled its finale to coincide with the Design Festival’s fourth and final day, when artist Olivier Grossetête was invited to reconstruct the People's Tower, Dundee’s Royal Arch, produced by Claire Dow and the Dundee Institute of Architects, in cardboard. First erected in honour of Queen Victoria, when she and husband Prince Albert visited the city in 1844, it was demolished only a few decades later in the rush for high street ‘modernisation’. French artist, Grossetête harnessed a group of volunteers to spend five days using cardboard to recreate the spectacular monument in Slessor Gardens for one glorious night, before inviting them to have fun trampling the cardboard back down to pulp. Despite the talent and willingness of the hundreds of Dundonians who had got together to make these events happen, it takes leadership to galvanise people so coherently, and in Stewart Murdoch Dundee clearly has the champion they need. It was Murdoch who bid for but failed to secure a slot for Dundee as City of Culture in 2013. Undeterred, he then secured the UNESCO City of Design designation (something you get the feeling Glasgow hasn’t forgiven it for).

I spent some time with Murdoch while he cheerily ushered a troupe of Chinese delegates – who had flown in specially for the festival – from another UNESCO City of Design, Shenzen, on a minibus tour of the city. Given carte blanche for what sights they might like to see, they asked to be taken on a tour of the city’s housing. And so we embarked on a journey through the city suburbs, through the greenery and parks that accompany the mass-housing estates both new and old, and the grand mansions of the former jute barons that still stand in Dundee’s West End. Dundee’s deprivation statistics make depressing reading (of the 114,290 people living in Dundee, some 42,125 of them live in data zones ranked among the 15 per cent most deprived areas of Scotland), but Murdoch made it clear that the city makes every effort to embed a ‘can-do’ culture at every level. Galvanised by the build up to the V&A opening, a programme embedding art and inventiveness into the city’s schools has flourished, prioritising the most deprived. It’s these schoolchildren who have participated primarily in many V&A design-engagement exercises, which have in turn helped to informed major development of the creative curriculum. Even the most cynical observer should get the feeling that this is a city that listens to its people. As Murdoch drove us through the city, he pointed to a village of new council houses that has replaced three huge and very problematic social housing blocks. He explained that not only were the occupants fully consulted on what kind of homes they wanted for the new village, but also the original inhabitants were allowed to return to them.

Given how seldom that now happens in cities like London, such consideration is heartening indeed. Attracted by its evidently enlightened stewardship, inward investment has flowed to the city – hopefully boosting employment figures and lift those deprivation statistics. Leading hospitality brands have invested millions already, buying in to the city as a culture, enterprise and leisure destination. The Malmaison Hotel opened in 2013, giving the former Mathers Hotel on the waterfront its usual atmospheric, contemporary-gothic makeover. The Apex hotel followed in 2015, providing an upmarket conversion to one of the city’s oldest waterfront buildings, the former Custom House and Harbour Chambers. Hampton by Hilton is scheduled to open in the city centre this month. Urban Quarter is also developing luxury apartments on a waterfront site.

Infrastructure has not been overlooked. The city’s train station – which disgorges its passengers right on to the V&A Dundee site – has been upgraded and expanded. And its airport, a mere hop, skip and a jump from the city centre, has just started flying direct to Amsterdam as well as London, Jersey, Edinburgh and Glasgow. So, it seems that everything is in place for a strong, strategic piece of culturally led regeneration – the talent and energy is clearly there, as is the commitment from local government to spread the benefits around the entire populace. The infrastructure is in place and there is one additional asset: communication. With a publisher as strong as DC Thompson broadcasting through its Dundee Courier all the events and opportunities to an engaged population, the mission has a far greater chance of success. And the warmth that this venerable publishing house feels for the initiative was demonstrated further by the fact that it was so impressed by how well its old print works had scrubbed up for the Design Festival, that it has been offered to the council as a permanent culture and event space, on very generous terms. Guess what Stewart Murdoch is planning next: Dundee as European Capital of Culture 2023. With the kind of investment in cultural programming that has been mustered for this run up to the big V&A launch next year, I’d say the city is in with a very good chance.