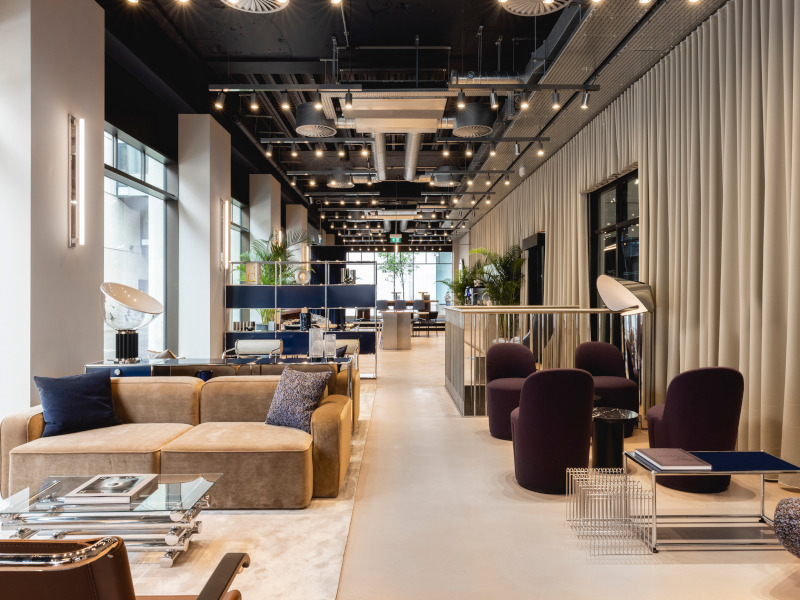 THIS IS the third project that design studio SODA has completed for flexible workspace provider The Office Group (TOG), after Thomas House, in Pimlico’s Eccleston Square, and Liberty House, next to the Liberty London department store. Each of them are very different: Liberty House with scalloped edges and colourful printed surfaces inspired by the department store’s signature fabrics, and Thomas House with timber-clad volumes plotting out a ‘rigorous’ layout inspired by Regency-era squares. This is because TOG does not have a particular style associated with its workspaces, SODA director Russell Potter explains, but is instead keen for the architects to drive the concept for each one, inspired by the unique history and features of a site. 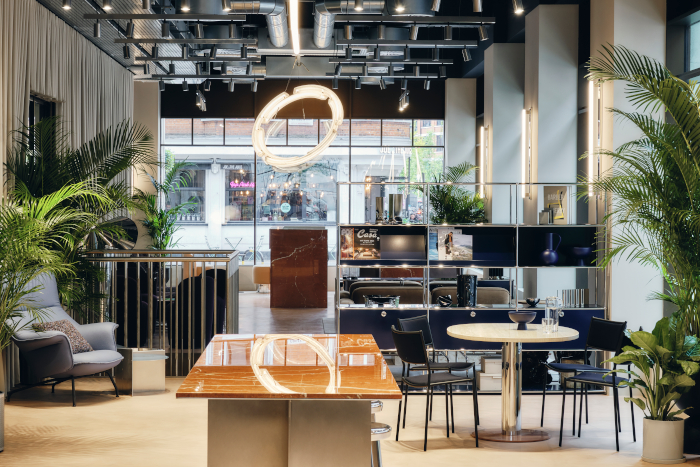 The high ceilings and floor-to-ceiling windows in the lounge bring in plenty of natural light. Image credit: BEN ANDERS

In the case of Brock House, the building had a number of historical uses that could inspire an idiosyncratic interior scheme. It was built as a philharmonic hall in 1907–08 and was used in various guises by the BBC for much of the 20th century, sitting right next to the corporation’s Broadcasting House on Portland Place. But the building also has a history of car design: one side of Brock House is on Great Portland Street, which, thanks to an abundance of car showrooms, became colloquially known as Motor Row in the 1920s and 1930s; Brock House itself hosted the manufacturing of car parts. ‘Digging around’ in this history, SODA found some ‘fantastic’ images, such as an old photograph of the space in use as a philharmonic hall with the St James Orchestra, and a poster from its time as a showroom for the Automotive Products Company. Physical evidence of the latter was also found when the building was being stripped out, with the discovery of steelwork reinforcing sections of the ground floor to support heavy machinery. 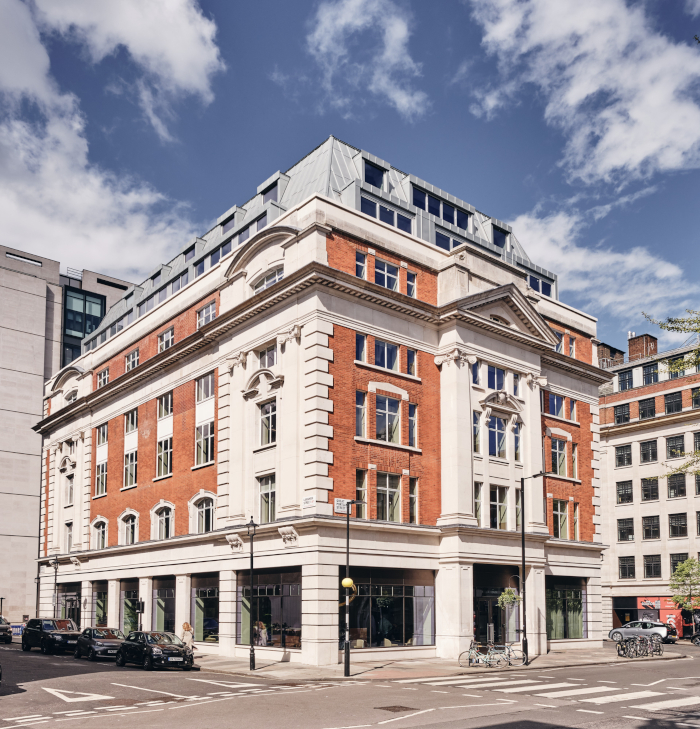 SODA was keen to incorporate both sets or references and was able to reconcile the two in one design by applying each on different levels. The philharmonic/cinematic references ‘set the stage’ as it were, with a heavy curtain hung continuously around the central core acting as a backdrop upon which the hive of activity on the ground floor plays out. Given Brock House’s unusual feature of glazing on all sides with large showroom windows, this space – where SODA located most of the communal spaces and amenities – enjoys an audience of passersby. 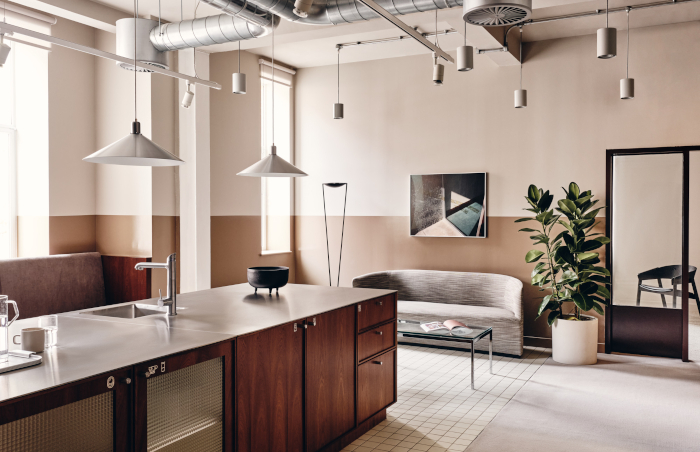 On top of the ‘sense of decadence’ established through colour and material choice are the elegant precision details of automotive manufacturing and machine age finesse, represented through metal surfaces and fixtures of glossy chrome, brushed steel or a car-related metalworking technique known as knurling (a kind of crosshatched effect), recreated by Mayes & Warwick. 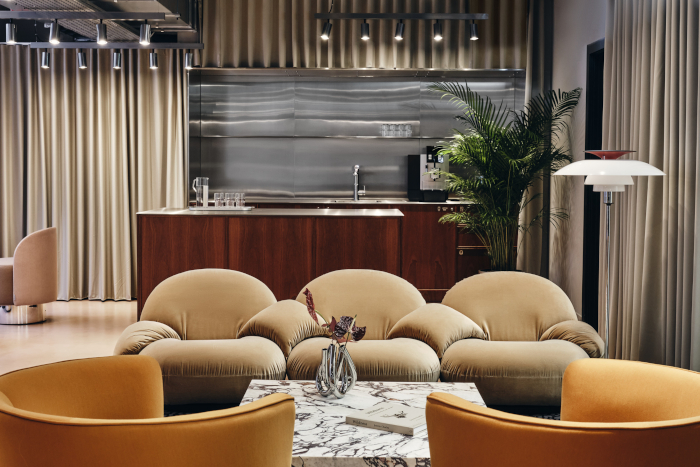 SODA was responsible for the branding and graphics, as well as the interiors and the colour palette needed to work across both 3D and 2D, Potter explains. Surfaces and soft furnishings use neutrals of beige and brown mixed with luxurious touches such as fine veneers and gilded details across graphics and signage. The marble reception desk, in the red-brown of Rosso Alicante marble, introduces an ambition of permanence: the idea of an obelisk, Potter says. 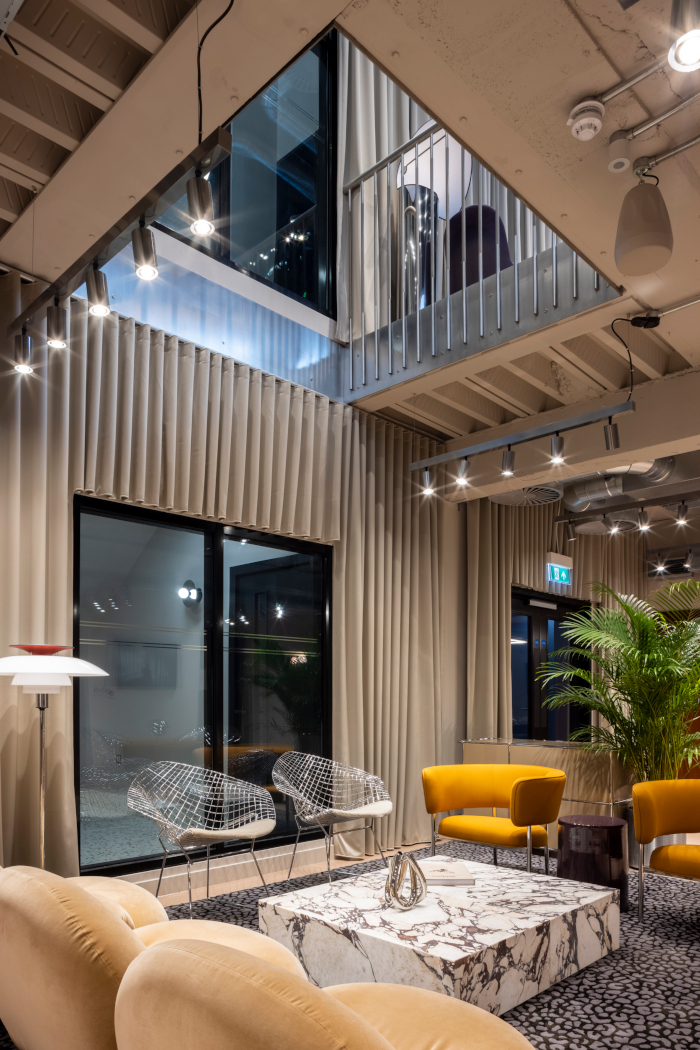 The heavy curtain hung around the central ground floor space is a subtle reference to Brock House’s cinematic past. Image credit: BILLY BOLTON

The basement floor, connected to the ground via a double-height void, offers a more secluded communal area with built-in soft seating and comfortable nooks. Unfortunately, a planned screening room – linking back to the building’s theatrical past – didn’t make it to the final design, but the accompanying bar did survive.

With the communal and casual areas concentrated on the ground and lower-ground floors, the upper levels offer more conventional office space, meeting rooms and phone and focus booths. More playful elements of the design are toned down, but the regular tea points feature the scheme’s distinctive brushed steel countertops and splashbacks, and cabinets with knurled metal handles. Terrazzo flooring is used throughout the core and main staircase, combined with steel handrails – again with the knurling detail. Throughout the eight floors of Brock House, furniture and fixtures were chosen in collaboration with TOG’s in-house team. 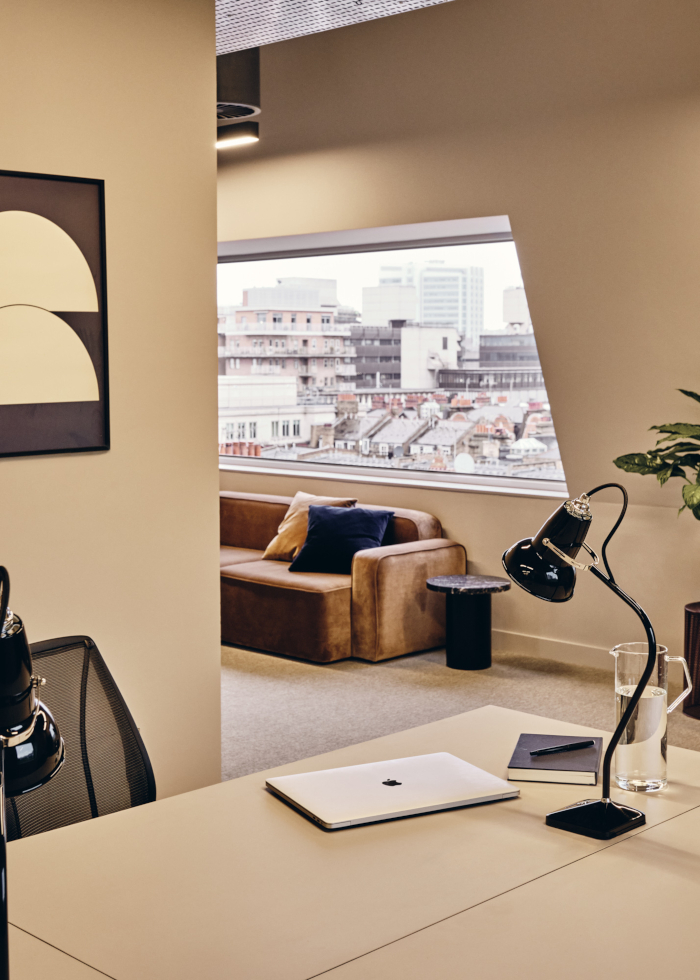 Potter mentions how SODA likes there to be two levels to a design: the part that everyone can appreciate, but also subtle references to historical detail for those who might be interested. Examples from this project include the aforementioned knurling, but there is also a stepped profile of contrasting tiles in the bathrooms, which echoes a historical detail found while researching the building – the gilded motif applied to the large showroom windows in Brock House’s Motor Row days.

A diversity of design across its spaces is a benefit to TOG’s model, allowing the company to appeal to a wider range of workers rather than being typecast – or being ‘more agnostic’ than its competitors as co-founder Charlie Green put it in an interview with the RIBA Journal. Thanks to both the original references and SODA’s treatment of them, Brock House does feel different to many of the other workspaces of a similar calibre, and offers a destination worth trying for TOG’s members.