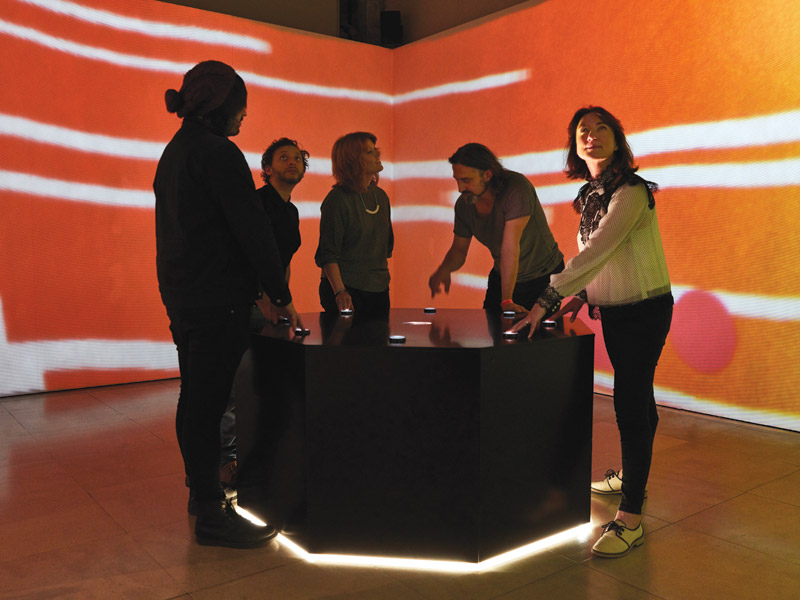 Youngsters in distress find it hard to articulate their feelings. But Dundee-based game designer Biome Collective has found a potential antidote, creating an interactive game, called Shpeel for the London Design Biennial. Veronica Simpson explores the buttons it is pushing

In a dark basement room of Somerset House a group of people are gathered around a large, black podium, pressing and patting the eight illuminated buttons on its shiny, Corian surface, curious about the symphony of sounds – from bell-like chimes to percussive bleeps – and visuals they generate. This multisensory spectacle of tones and rhythms, squiggles, grids, geometric shapes and waves is designed to represent a variety of emotional states, from joy to anger. Meet Shpeel, a fascinating propositional device, incorporating gaming techniques, 360-degree sound and interactive animation, to help young people express or recognise the feelings they are struggling to articulate.

Shpeel is the creation of Dundee-based game designer Biome Collective. And it is the project chosen to represent Dundee for the London Design Biennale (LDB) – the first time that a handful of cities (alongside the usual countries) has been invited to participate in this newcomer to the global design calendar. For its second outing the LDB’s theme is Emotional States, and when the curatorial/ production duo of Tilde Arts and Creative Dundee got the call to respond to the LDB brief, it chose to slice beneath the big media story of the moment – the opening of the new V&A Dundee, in September – and focus on some of the city’s evolving strengths and enduring challenges. It decided to pair the city’s worldwide reputation for game design (nurtured through the outstanding courses at both its universities, Abertay and Dundee) with a concern for mental health – a real and ongoing issue for a city that still has the UK’s fourth highest rate of unemployment and some of the highest deprivation levels in Scotland.

So in May this year Tilde founder and project curator Siôn Parkinson invited Dundee-based designers including Biome, mental health professionals, campaigners and clinicians to brainstorm this leading question: ‘What can gaming technology do for mental health in Dundee?’ A mock-up of an exhibition of the Biome Collective's work. Image Credit: Ross Fraser Maclean

The focus then narrowed to the concerns being expressed by the city’s youth services. Laura Cooney, community learning and development worker for the Corner (Dundee’s much lauded NHS-funded youth drop-in centre), says: ‘The young people that come to us often don’t have the language to describe how they feel. This can be really frustrating for them.’ Cooney plus colleagues and centreusers, alongside the youth collective Hot Chocolate Trust, worked closely with Biome and the LDB team to design a device that could help get those conversations started – or, as Parkinson says, to ‘allow people to really express how they feel without using words’.

What was shown at the LDB in September is very much a work in progress: a possible prototype that can be adapted, refined or tailored in a multitude of ways. It’s not a precise scientific tool – and neither is it meant to be. Parkinson instructed the team to be intuitive rather than over-rational. He says: ‘The range of emotions we have – translated through colour, sound, shape, scale – how do you convey all that with eight simple buttons?

It feels quite restrictive. But what Biome Collective has done is make a wide range of emotions available via a vast number of interactions. It is designed to have more than one person playing a game – it could be a counsellor and a young person, or a group of people together. It’s this idea of playing and speaking that is really important – we speak our truth most clearly when we’re occupied with doing something else.’ The name Shpeel itself is intentional – a misspelling of the word ‘spiel’ (meaning to speak or play).

Still very much a work in progress, it is interesting that not everyone experiences the device’s emotional triggers in the same way – for example, a dense, prickly shape and harsh sound (Parkinson screaming in a lift) designed to evoke anger was seen as energising by some. These reactions as well as those of LDB visitors - will all be noted, potentially impacting on future refinements. So how did this device go down during the LDB three weeks? On day two, when I spoke to him, Parkinson said it varied massively: ‘Older visitors have that kind of cautiousness about interacting with an exhibition. And a bunch of children came in with their parents and they were trying to unscrew the buttons – which is fine, it’s designed to be bashed to bits. One group of people came in and created something really interesting together and wept and laughed through it. Some people were really giggling. Some people felt it was too oppressive or ominous.’ It’s all useful, says Parkinson: ‘A response is what we wanted. Ambivalence is an emotion too…’

I found it a fascinating and welcome evolutionary twist that game designers, whose fundamental motivation is to create distractions so compelling they can lure teenagers ever deeper into a world of fantasy and escapism, are deploying those same skills to help youngsters tune into their inner landscapes. But I can’t help being acutely aware of the irony – as the WHO now lists Video Game Disorder as an escalating mental health condition – that the very mechanisms which seem to be unhinging these youngsters (the instant gratifications of a life lived increasingly virtually) now have to be pressed into the service of rescuing them.