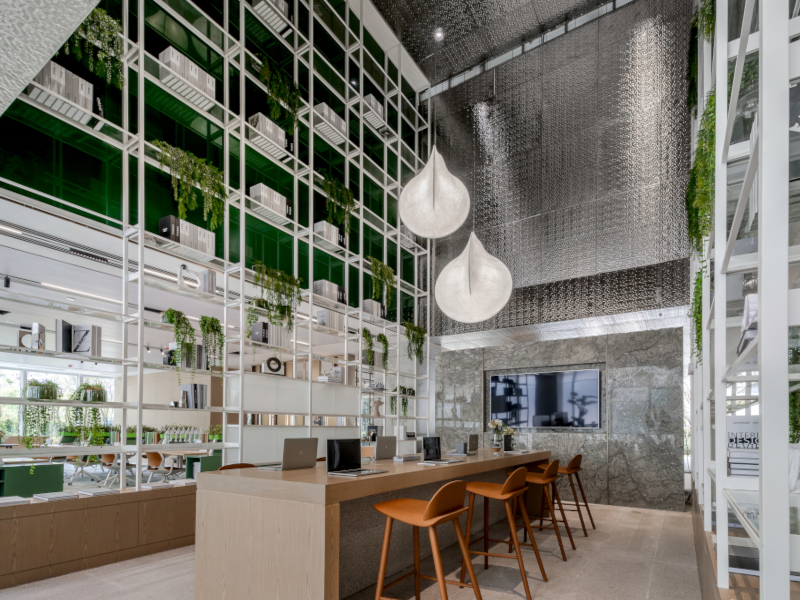 SHH HAS DELIVERED contemporary interior spaces for KWG BIOVALLEY, a medical research and development centre in Qingpu, Shanghai. The research centre is part of a new commercial park for health and Innovation in the Qingpu district and specialises in pioneering medical technologies including stem cell technology as well as traditional Chinese medicine. The two different medical methods come together onsite and are reflected in the contrasts between technology and tradition, architecture, and natural landscapes. 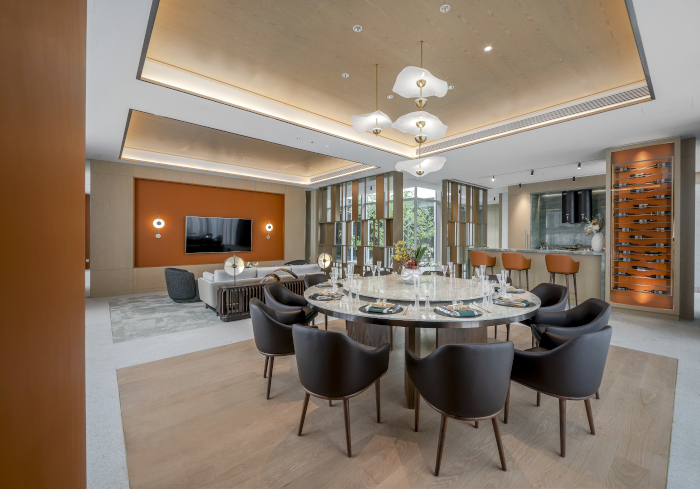 The private wing for the company president includes exclusive office and leisure facilities, accommodating both work and feeling like home

The new commercial park consists of five office towers linked by a retail podium along with 11 low-rise buildings bordered by green zones with access to a recreational promenade along the adjacent canals that connect to the Yangtze river. 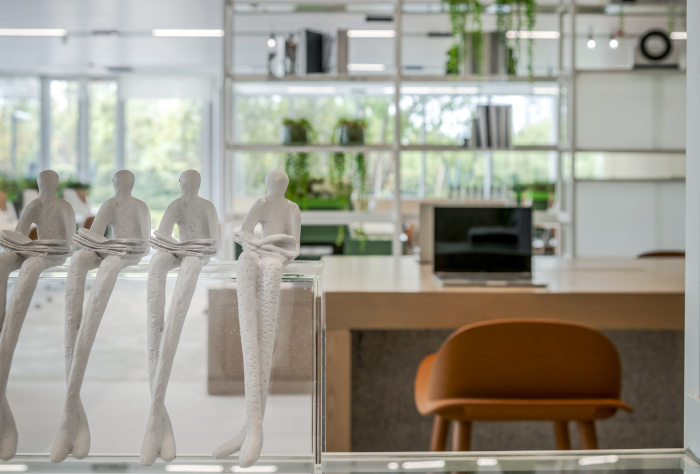 The interior was designed to not only host works of art, but also built with elements that could also act as art in their own right

‘Our proposal reflects the contrasts between technology and tradition, architecture and natural landscapes. We drew inspiration from both Western influences and natural materials to create connections with both medical methods’, comments Alastair Kelly, senior interior designer at SHH.

The design language of natural materials is consistent across all areas. The lobby and lift areas are bright and minimal, with granite-tiled flooring, natural stone-lined walls and discreet green touches. Oak timber panels, stone and full-height metal fins line the main lobby walls, creating strong visual connections with the building’s facade, while in the adjacent lift area dark bronze panels wrap the walls and ceiling creating a strong contrast and depth within the space. 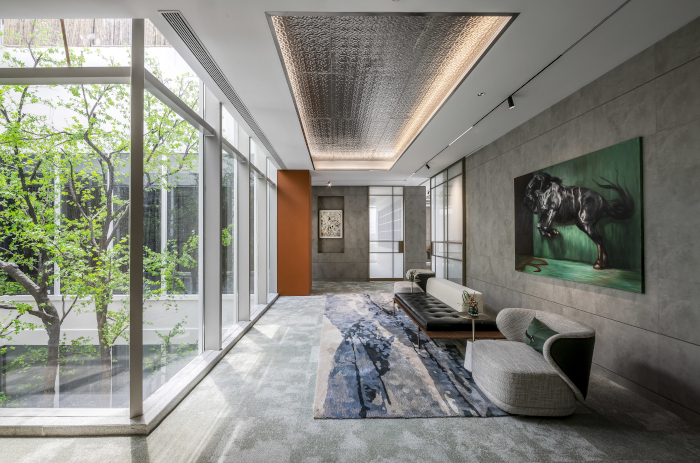 ‘The interior space was formed around the perimeter of the building keeping circulation and service zones arranged around the offset core,’ explains Kelly. ‘The priority was to ensure that interior spaces receive ample natural light and that they flow seamlessly against the natural backdrop outside.’

Full-height, metal-frame screens and open shelving are introduced to create permeable space divisions and circulation paths while allowing ample daylight to enter throughout the day. The open-plan reception and waiting area feature embossed mirror polished metal panels, their ripple patterning creating connections with the water element of the canals. Smaller built volumes including a pantry and private meeting rooms have been positioned around the perimeter of the office floor and break up the clusters of open-plan space. 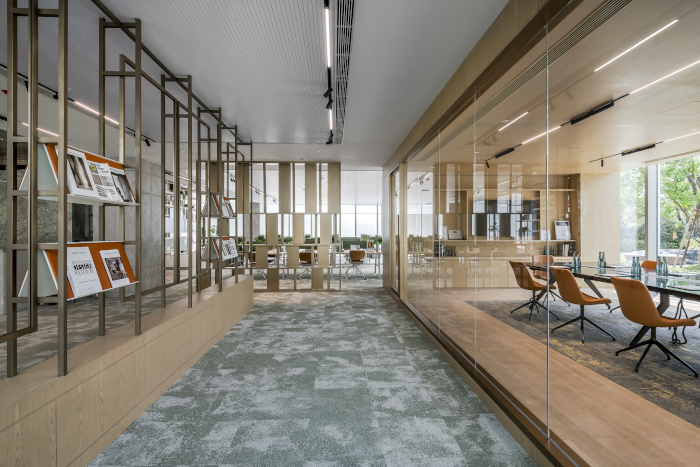 ‘We wanted to reference the water element in our design as the building is located on a recreational promenade along canals that connect to the Yangtze river, explains Kelly. ‘An internal water feature was impractical, so we applied mirror embossed metal panels to the ceiling, wrapping up the double-height void like a river running through the space. This feature creates a floating illusion and helps light travel deeper into the ground floor through its reflective nature.’

On the upper level, SHH was able to further enhance the open sky atrium by introducing a large tree in the centre, providing a lush-green focal point that is viewed from across the floor. ‘We also introduced bronze screens to help divide different zones by reinforcing the connection to the natural materials outside’, adds Kelly. 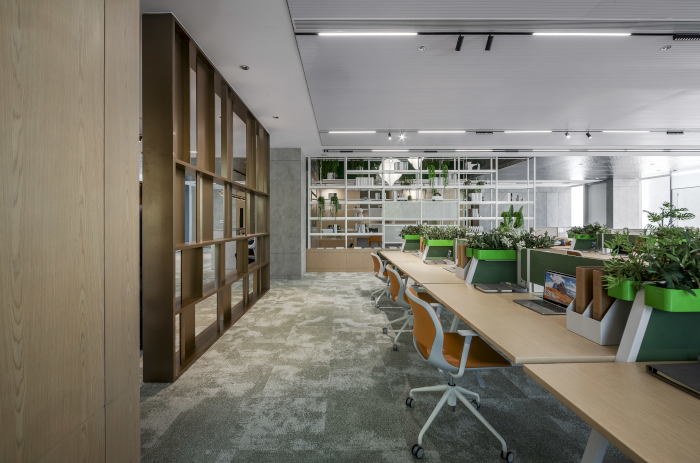 A private wing for the company president has also been designed by SHH and is in keeping with the overall design concept, featuring large timber boxes, expressions of metal and stone finishes. The private wing offers exclusive office and leisure facilities, including a gym and dining areas. It also accommodates the president’s private bedroom and bathroom as well as smaller private workspaces, a secondary reception lounge and a refined, timber-wrapped tea room with bespoke joinery. The intention is to create a comfortable and functional environment that accommodates work while also having a home feel.

‘This part was designed to host artwork but we also explored what built elements could also act as art too,’ says Kelly. ‘For example, the large floor to ceiling sliding doors between the chairman’s office and tea room were installed to provide privacy but we also took the opportunity to design them in a way that they could always be used to create a feature display. Using fine bronze framing and fabric laminate glass, the doors are installed on the outside of the walls rather than hidden in pockets and act as a feature whether closed or open.’

Not being able to travel to site was one of SHH’s biggest challenges. Having started the project at the beginning of the pandemic, SHH had to adopt new working strategies to have consistently clear communication from afar. Kelly says, ‘We relied on a good relationship with the client and project team and had to carefully analyse and research the information we could access from the architect, landscape architect and other parties involved’.