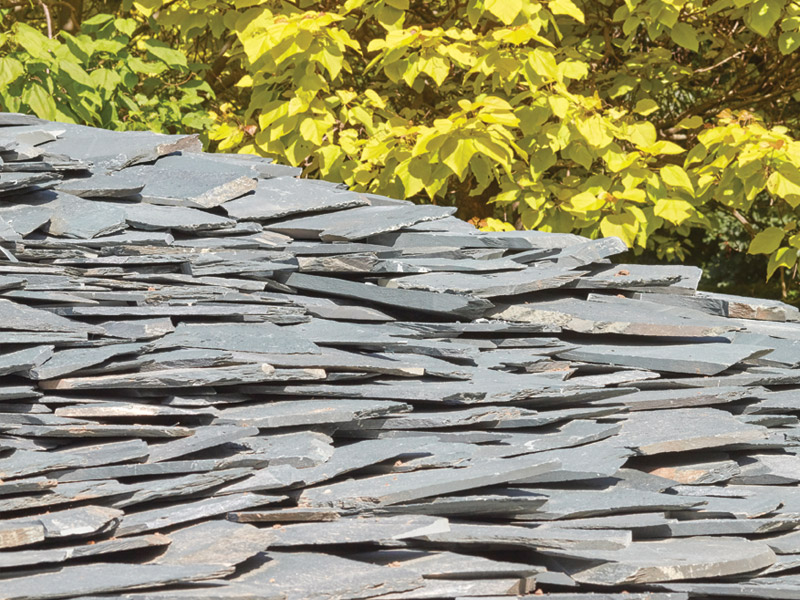 This year’s Serpentine Pavilion, by Junya Ishigami, uses 61 tonnes of Cumbrian slate to create an enigmatic structure that serves as a shelter from summer rain, at the same time as being transformed by it

The concept for this year’s Serpentine Pavilion was presented to the world as a ‘hill of rocks’ seeming to emerge from the lawn outside the Serpentine Gallery, borne aloft and billowing out like a carpet of stone magically transformed into floaty, flowing fabric. Now realised, the 61 tonnes of slate hand-woven into sinuous, organic form seem more reminiscent of a scaly dragon crash-landed in Hyde Park. But to Junya Ishigami, his first work for London is actually a big black bird, not unlike the one he witnessed soaring above the nearby lake and determined to recreate in feathers of stone.

‘I kept the inspiration secret at first because I was afraid people wouldn’t get it,’ explains the famously experimental and rule-defying Japanese architect — the fourth from his country to have been asked to design a pavilion in the project’s 20-year history. Rain falls gently around us, producing a trickling curtain enfolding the open sides of a structure which feels at once cave-like yet part of the surrounding landscape; working with the stuff of nature is Ishigami’s passion. With its shimmering roof, intended to reflect the surrounding scenery once its stones get wet enough to shine like a mirror, this is a building in which to celebrate, rather than merely shelter from, a showery British summer.

Although he likes to think of his Serpentine design as ‘local — to this particular park, not just this country — and at the same time universal’, Ishigami’s pavilion is full of references to his native Japan. There is the slate itself, used in the country’s rock gardens and traditional rustic roofs, the forest of slender steel columns providing very visible supports reminiscent of the undisguised wooden stakes installed in Japanese parks to prop up picturesque but precariously meandering boughs, and the lotus-shaped brushed metal stools on which to perch and enjoy coffee while waiting for the rain to subside. But most of all it’s a reverence for nature, a striving to integrate buildings into landscape which has been practised in Japan for centuries. Like last year’s effort by Frida Escobedo, this pavilion employs roofing material as its key constituent, but the two structures couldn’t be more different. The former used uniform, machine-made tiles requiring only minimal customisation, assembled off-site in modules during the crazily short build time, while Michael Orr, lead engineer on the Aecom team of technical advisors tasked with realising the 2019 pavilion, explains Ishigami required every one of his Cumbrian slates, quarried from the last working mine in England, to be hand-worked with a hammer on site to create the ragged, feathered stones the architect had in his sights. It was that bird the architect had spotted on the Serpentine and vowed to emulate in function as well as form: ‘I wanted the heavy stone to look like it was floating in the air.’

The actual fabrication of the roof which Ishigami wanted to look distinctly unstable — ‘so light it could blow away in the breeze’, he says — in contradiction to the brief for a thoroughly stable structure strong enough to withstand wind and rain, was undertaken by six stonemasons. They were found in Cumbria, where the slate was quarried, and employed by contractors Stage One at the start of the project to guarantee the feasibility of delivering Ishigami’s vision. After building small sections for evaluation as the final design evolved, the masons spent two weeks on site laying the slate — 66 tonnes were delivered in large slabs, with around 10% wastage in the process of creating small tiles and hand-chipping each one to a feathery finish. While the challenges were enormous — not least getting in enough slate of the desired shade from one mine delivered in time — Aecom technical design director Amy Koerbel says the nail-biting was compensated for by a deep sense of satisfaction: ‘It’s really special to show you can do bespoke architecture with hand-crafted construction in a short timeframe, so long as you work together as a team from the very beginning.’ The dipping canopy was designed to be accessible from all sides

At least the 50mm-thin steel columns which Ishigami sees as a representation of streaks of rain were standard, but more tweaking was required to create a clearly visible sag factor within the basket of steel mesh which supports the slates, each one tied in by hand, a device to accentuate the weight of the roof. ‘Deformation occurs naturally, but this effect was calculated and the engineering carefully tuned to balance the visual effect envisioned by the architect with the technical requirements of the roof,’ explains Koerbel. A wall of transparent but far-from-invisible polycarbonate insisted upon by regulators as a windbreak was not part of the vision, admits Ishigami, whose idea of access from all areas of what is essentially a dipping canopy, including the lowest points beneath which small children might be able to crawl in from the lawn, was also scuppered for health and safety reasons. So far as the selection of this year’s architect is concerned, Serpentine curator of exhibitions and architecture, Amira Gad, says it was considered vital to approach Ishigami — who before establishing his own practice in 2004 worked at SANAA, creators of the 2009 pavilion — without delay if he was to be eligible to design his own for the gallery. One of the ground rules is for the architect not to have completed a building in London at the time of invitation, and Ishigami’s fame has been growing exponentially in Europe thanks to projects in Venice and the Netherlands as well as a famously ‘invisible’ installation at London’s Barbican Gallery.

‘He has been in our minds for a number of years now; we were reminded of the scope of his practice by his exhibition for the Fondation Cartier in Paris and felt it was urgent to invite him,’ Gad explains, referring to the 2018 Freeing Architecture show presenting 20 of his most audacious concepts. ‘He has a very particular approach to dealing with space and is able to combine nature and traditional methodologies and give them a contemporary twist. This slate is Cumbrian and there is a slate tradition in Japan, but roofing tiles have a global root and reference which was quite attractive to us.’ Roofing is inevitably a concern for the Serpentine Pavilion given the vagaries of the British summer, but Gad was taken aback by the dramatic way in which torrential rain during construction enhanced the aesthetics of a pavilion which appears at first glance too open and ethereal to provide proper protection. ‘The rain sliding through the edges was beautiful and poetic, the feeling of being surrounded by a curtain in a room with the kind of invisible walls Ishigami creates,’ she recalls. Those invisible walls have been created in everything from glass, for a workshop at the Kanagawa Institute of Technology which made him the youngest-ever recipient of the Architectural Institute of Japan Prize, to almost literally invisible strands of carbon fibre in the Barbican. His Architecture As Air installation made of similar impossibly fragile strands took the Golden Lion prize at Venice’s 2010 Architecture Biennale, despite being so unstable it was toppled overnight by a trespassing cat. The pavilion articulates a very Japanese integration of building and landscape

If anything was a first for Ishigami, it was not materials — this is an architect who has taken trees, water, plants sunk into soil floors as living furniture and even crocheted mohair as his fabric — but the challenge of completing a building within six months from commission, especially one capable of being taken apart and seamlessly reassembled by hand. Time had to be taken for the architect to make and evaluate physical models of sections for analysis as the build went along, and he is unapologetic for his resolutely hands-on approach in an increasingly digital world: ‘Many architects make models, but our practice makes lots of them, often at full size.’ Even the drawings were scaled up to life-size in the Tokyo studio, and real slate was used alongside polystyrene in the models.

Too short a time between commissioning and unveiling has been blamed by some critics for a brave but imperfect effort which will surely be a challenge to de-install come October, when each tile will have to be painstakingly removed one at a time. Ishigami believes the universality of slate and of roofs in general will help his big bird of a shelter find a new permanent home, and hopes its summer debut will showcase his experimental flair to imaginative developers looking to create a more long-term optical illusion in Britain.

The 2019 Serpentine Pavilion will be on view until 6 October.