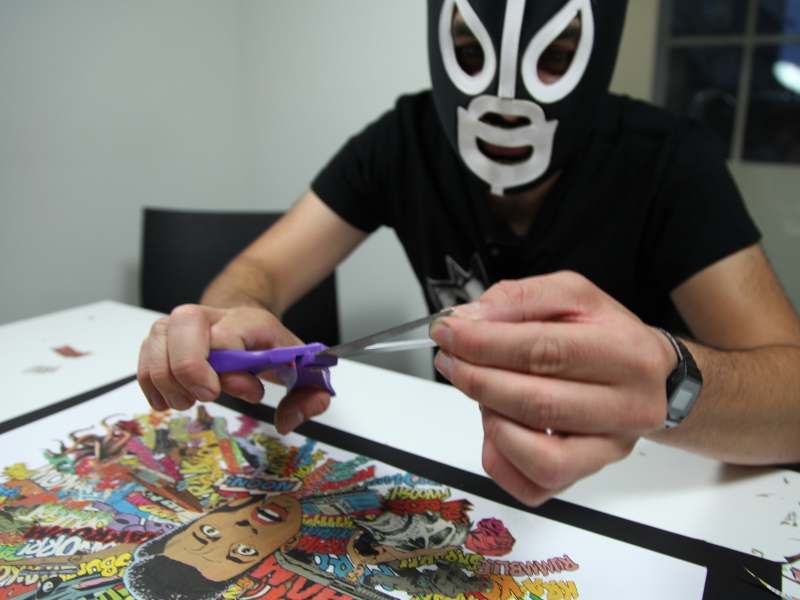 Masked collage artist Mr Garcin, who has created covers for Marvel books and comics, has released a time-lapse video of him creating one of his amazing collages

He's produced iconic Marvel covers for Spider Man, Daredevil, Thor and Captain America, now the famous (or should that be infamous) masked comic collage artist, Mr Garcin has released a time-lapse video, which shows in super speed how he creates his amazing, intricate comic tableaus.

The artist has released the video to mark the 2014 London Comic Con, which took place in London 11-13 July.

Mr Garcin was at Comic Con signing fans' copies, selling his latest works and contributing to an art book in honour of Stan Lee, in many people's eyes the father of Marvel and the creator of some of its most distinctive characters, including the Hulk, Avengers, Spiderman, Iron Man and the X-men. The time-lapse was shot using an array of Autographers - intelligent, wearable cameras.

The London Film and Comic Con, held this year at the Earls Court centre, is a celebration of all things sci-fi, including appearances from actors in everything from Star Wars to Dr Who, as well as photo shoots, panels and displays of TV and Film memorabilia.