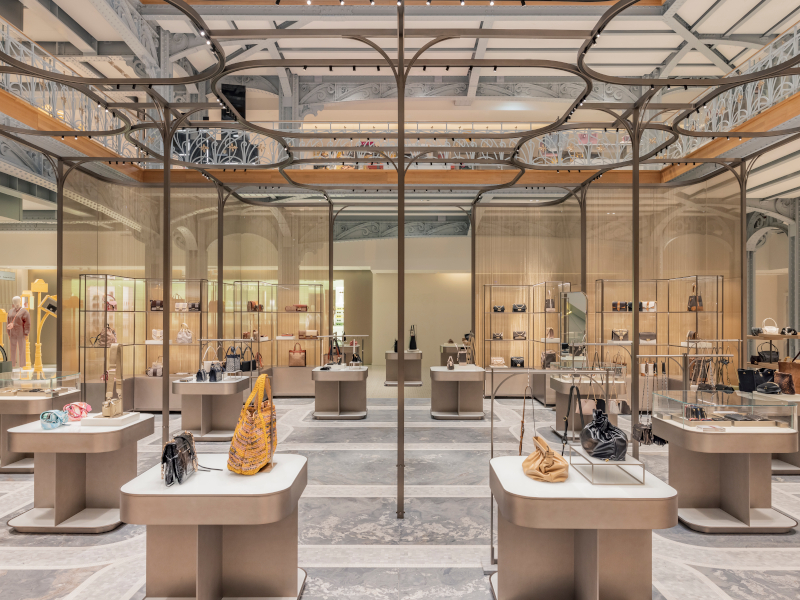 The iconic department store has been reinvented, with a new layout that combines the original and contemporary

REVIVING PARIS’S much-loved La Samaritaine department store is truly an international affair. Dating back to 1870 and well known for its distinctive art nouveau and art deco features, the luxury store closed back in 2005 amid building safety problems. Since then it has changed hands, with new owner luxury goods company LVMH embroiled in a long planning saga to reinvent the site and bring the store back into use. Finally, with the help of Japanese architects SANAA and Canadian designers Yabu Pushelberg, it has done just that. 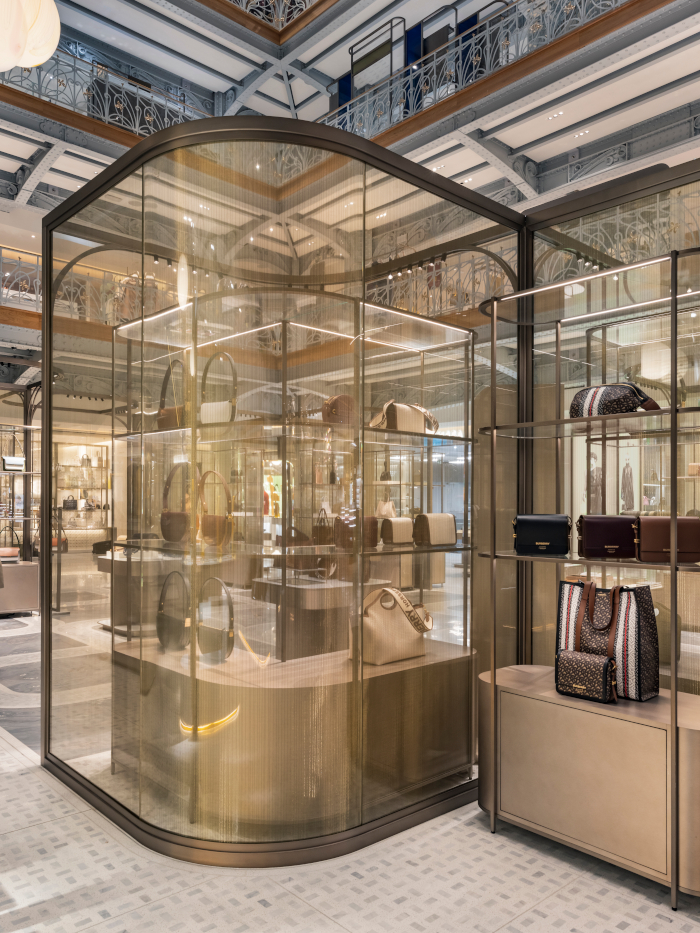 From the outside, it is SANAA’s intervention that initially grabs the attention. The practice has created a bold new building with an undulating glass skin on the part of the site fronting the Rue de Rivoli. This creates a contemporary facade in contrast with the store’s neighbouring historic buildings on the Rue de Pont-Neuf alongside the Seine. Here, the art nouveau (Frantz Jourdain, 1910) and art deco (Henri Sauvage, 1928) heritage buildings have been completely restored, retaining the gorgeous detailing of the colourful elevations. 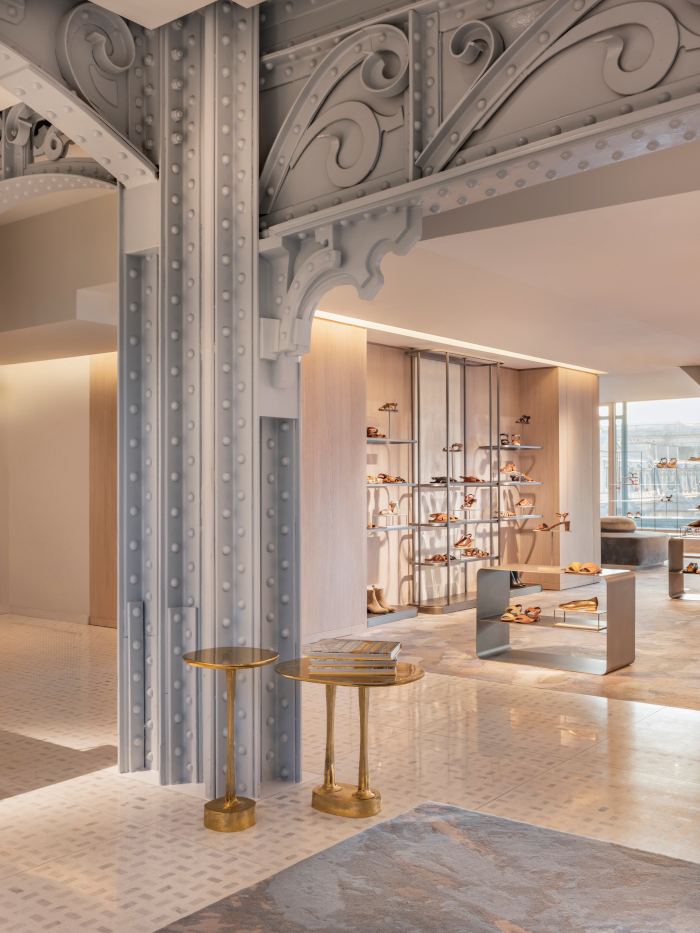 The original metalwork has been restored to a soft grey/blue

The insides of the restored buildings are stunning. The spectacular glass pavilion roof of the art nouveau building, which had been covered up, has been revived to once again let light flood in from above, and the 115m long peacock frescos beneath this have been restored. The grand staircase that rises up the full height of the Pont-Neuf building atrium has also been renovated. 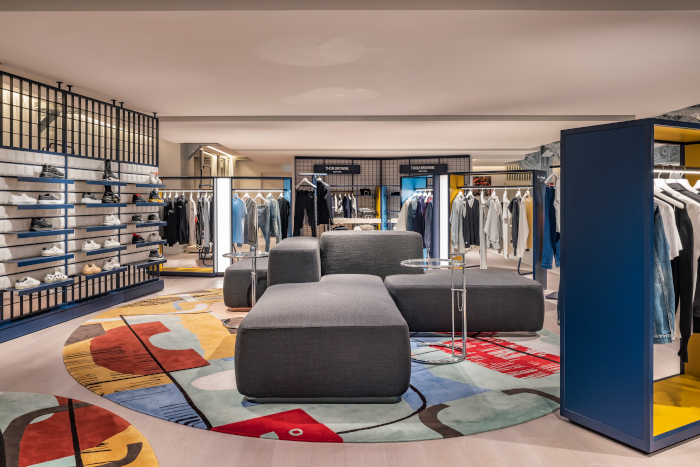 It was Yabu Pushelberg’s task to create an appealing interior for the Pont-Neuf building that would help draw in customers to visit in person rather than online – no small task at a time of pandemic.

Yabu Pushelberg’s aim was to make the store ‘feel French for foreigners and international for Parisians – something new for both, so they will want to come back,’ says co-founder Glenn Pushelberg. 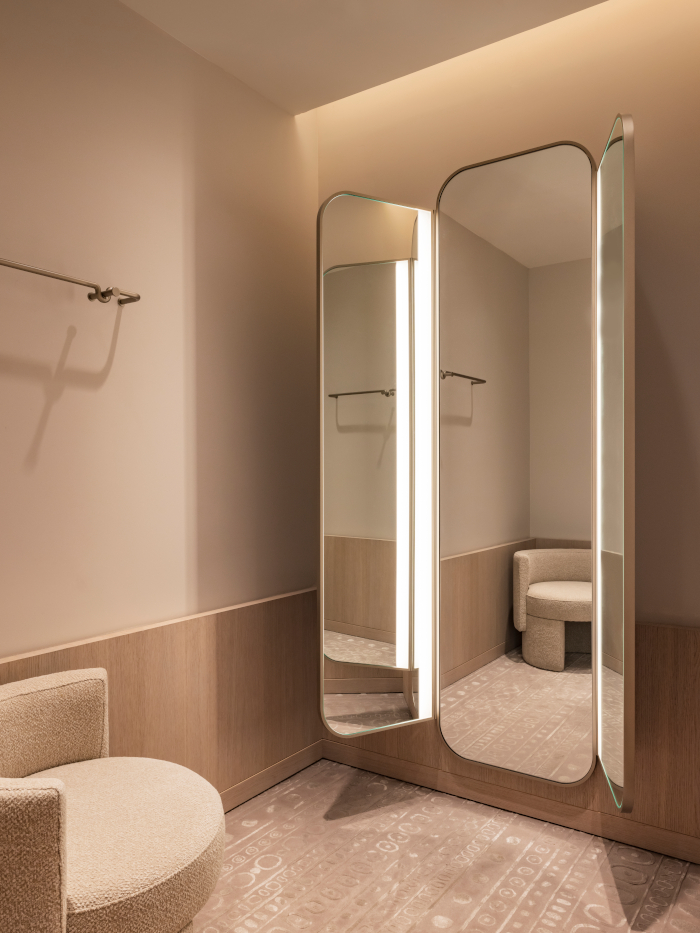 The designers were respectful of the considerable architectural heritage, aiming to create new interventions that ‘felt comfortable’ with what was historic, and didn’t attempt to compete with the expressive structure and decoration. But even though this required a light touch, they were determined to avoid any hint of banality. Instead, they aimed to create a feeling of serenity and a shopping experience that was a delight rather than a drudging chore.

The introduction of more natural light from both above and the sides was a big part of this. Yabu Pushelberg was also involved in the decision to restore the metalwork and handrails that are so prominent around the atrium to a soft grey/blue – at one point a sunshine yellow had been considered. This softer hue helped create just the right balance between the overall palette and the self-expression of the many brands within the store. Terrazzo, chosen for its ‘fluidity’, is used extensively on the floor. This is combined with curved glass fixtures, woven metal mesh screens and bronze detailing. 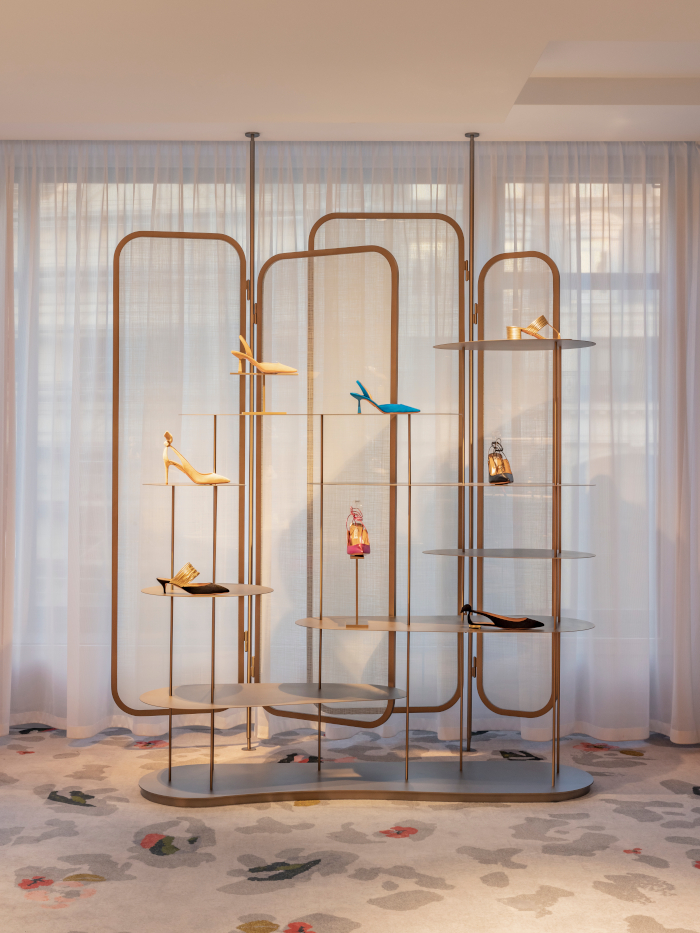 The focal point of the central great space is particularly successful. Here, the designers not only had to ensure great views up of the wonderful interior but consider views down to the atrium’s ground floor too from above. The challenge was creating an area with an appropriate elegance and visual impact when seen from all angles that nonetheless functioned as a shop. The solution was a combination of graphic floor pattern using grey stone with terrazzo and delicate steel merchandising units that allowed views through. These structures are designed to accentuate the curves of the flooring pattern and are illuminated for impact when seen from above.

Beyond the atrium, the designers had to drop the ceiling level to accommodate new servicing, but took care not to conceal the overhead beams entirely so that the important original architecture is still visible. In the ‘Backstage’ area on the ground floor, an interplay of light and dark area aims to create a sense of drama, as if backstage at a theatre, with dark, rounded metal fixtures designed in response to the original, more ornate metalwork in the atrium.

Routes through the store are meandering rather than straight and are designed, says co-founder George Yabu, to ‘seduce’ you to walk that path. Yabu Pushelberg designed the fixtures and furniture, which are designed as timeless pieces with what Pushelberg describes as a sense of quality and permanence that become the architecture of the space.

Other design teams are involved in further parts of the La Samaritaine site including Ciguë, which created the interior of the new Rivoli building. This has a more urban, street feel and features rough walls with exposed studs and screws. Hubert de Malherbe designed the basement beauty area that extends between the Pont-Neuf and Rivoli buildings.

La Samaritaine is among a clutch of high-profile European projects recently completed.