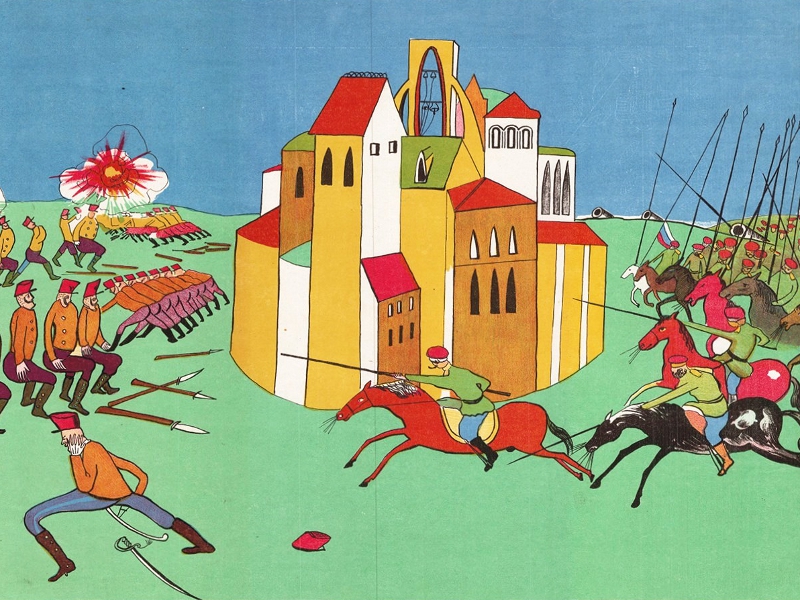 Russian art depicting the First World War, some of it never seen in public, is to go on show at the Grad gallery in London from 27 September to 30 November 2014

Rare artwork depicting Russia's role in the First World War is to go on show at the London's Grad Gallery for Russian Arts and Design.

A Panin, On the Frozen Ship, 1914, gouache on paper. Courtesy of GRAD

Unlike in countries such as the UK, the effects of the First world War in Russia have been largely under-examined due, in part to the 1917 Revolution, which to some extent eclipsed the war and the fact that Russian museums were instructed to remove art relating to the First World War during the Soviet period.

Aristakh Lentulov, The Austrians Surrendered Lvov to the Russians like Rabbits Defeated by Lions, 1914, lithograph. Courtesy of GRAD

The gallery says: 'So rapidly was the First World War succeeded by the 1917 Revolution and the Russian Civil War that there was little time to process its impact during the changing regimes that followed. In collaboration with the Russian State Library and an important private collection, GRAD bring together a rich variety of contemporaneous materials, many of which are on display for the first time in a public context, to examine public, personal and artistic responses to the war. Exhibits include Natalia Goncharova's woodcut portfolio 'Mystical Images of War' and hand-made Futurist books, as well as propaganda lubki by Vladimir Mayakovsky and Kazimir Malevich and photographs of the conflict.'

Many of the items on display at GRAD are part of the exceptional collection of Sergei Shestakov, which averages in total around 500 printed items, periodicals and graphic designs and over 2000 photographs.

Kazimir Malevich, Look Look, Near the Vistula, The German Bellies are Swelling Up, 1914, lithograph. Courtesy of GRAD

The collection is particularly important because of the dearth of materials relating to the First World War in Russian museums, which they were instructed to disregard during the Soviet period.

Unknown artist, A Chat at Tsargrad, 1914, lithograph. Courtesy of GRAD

According to the gallery, 'Shestakov's collection brings to light the personal stories of Russians affected by the War, unveiling a plurality of perspectives.'

Kazimir Malevich, Our French Allies Have Filled a Cart with Captured Germans, And our British Brothers have a Barrell full, 1914, lithograph. Courtesy of GRAD

Satirical prints, cartoons and illustrated periodicals show the changing attitudes of the public and the media to the unfolding conflict. Unique photograph albums, which have never before been exhibited, depict the daily routines of front line military service and illustrate the stories and exploits of an entire air force battalion. Unknown artist, The Russian War Against the Germans, 1914, lithograph. Courtesy of GRAD

The exhibition also examines the birth of Russia's artistic avant-garde, whose members were influenced by the stylised aesthetics of popular prints and the naïve style of children's drawings. Unknown artist, The Enemy of the Human Race, 1914, lithograph. Courtesy of GRAD

Hand-crafted Futurist books by artists such as Olga Rozanova, Aleksei Kruchenykh, Velimir Khlebnikov and Pavel Filonov combine poetry with collage and various printing techniques. Examples of these books included in the exhibition are 'A Game in Hell', 'War' and 'World Backwards': today considered masterworks of the period, these books are rarely on display due to the delicate nature of their materials. Unknown artist, The Great European War, A Battle in the Air, 1914, lithograph. Courtesy of GRAD

'A Game in Hell': The First World War in Russia is on at the Grad Gallery for Russian Arts and Design, London, from 27 September -30 November 2014.