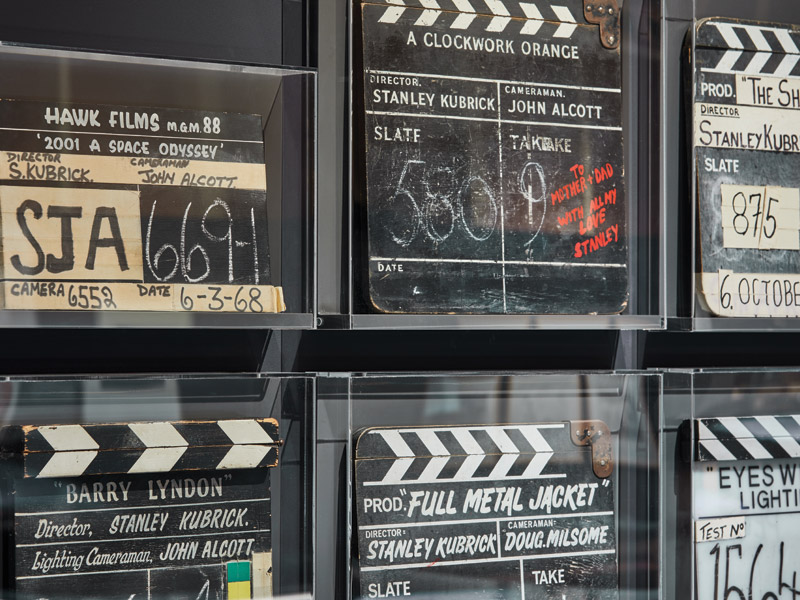 The Design Museum scores a hit with its latest blockbuster show, this one on legendary filmmaker Stanley Kubrick

All Images – Ed Reeve for The Design Museum

Twenty years after the celebrated director’s death, Stanley Kubrick remains an enigma. The Design Museum’s spectacular new exhibition, however, shines a light into Kubrick’s deep creative depths thanks in large part to access to the Kubrick Archive at the London College of Communication at the University of the Arts (UAL) in Camberwell and the collaboration of the Kubrick family, estate and trustees.

The amount of personal material, artefacts and film props on display is extraordinary and where the exhibition really scores is in showing the truly obsessive level of detail and research that Kubrick put into his 13 main films. This is well-known fact, but truly eye-opening when you are confronted with the sheer scale of it. Kubrick approached every film project in the way his hero since childhood, Napoleon Bonaparte, approached military strategy. Kubrick spent years meticulously researching film projects, many of which were never made. Thankfully the exhibition, curated by museum director Deyan Sudjic, pays due attention to these unrealised films and gives a tantalising glimpse of what might have been. For the Napoleon project, whose failure caused Kubrick to sever his contract with MGM, Kubrick produced an index card for every day of the French Emperor’s life, recording minute details, right down to what he ate.

The opening section of the show, designed by Marina Willer of Pentagram, concentrates on the behind-the-scenes elements from research and planning, through to cameras and editing (including the suite Kubrick personally used for Full Metal Jacket). It also has a physically behind-the-scenes feel, with framework walls, which are only finished on the other side where the show moves on to a series of rooms dedicated to each of his big films from the 1957 Paths of Glory onwards. The Droog uniform, designed by Milena Canonero, went through a number of different hat options before settling on the bowler

Unsurprisingly, the section of the exhibition devoted to 2001: A Space Odyssey is one of its highlights. In 1961, John F Kennedy vowed to put a man on the moon by the end of the decade. Kubrick was determined to get there first. The exhibition features a vast and utterly scintillating series of exhibits from the film including original artwork, model spaceships, costumes and props. Kubrick and his lead film crew, including cinematographer Geoffrey Unsworth and art director John Hoesli, wanted not just to imagine but to actually realise future design and technology. With astute foresight, Kubrick invited commercial product designers and industrial manufacturers to collaborate on creating designs, including big iconic brands of the day such as IBM, Bell Telephone and Kodak. It was so far ahead of its time that a recent lawsuit between Samsung and Apple even cited 2001 as the original source of the first tablet computer design. Kubrick was an avid follower of contemporary design and fashion — a large printed quote in the exhibition extols: ‘There is a sexiness to beautiful machines, the smell of a Nikon, the feel of an Italian sports car or a beautiful tape recorder.’ In A Clockwork Orange (1971), the interiors were furnished with futuristic, but commercially available, contemporary pieces. Lead Droog Alex’s bedroom includes a scarlet Olivetti typewriter designed by Ettore Sottsass and Retreat Pods by graphic designer Roger Dean. The costume design of the Droogs was created by Kubrick’s favourite designer, Milena Canonero, who drew inspiration from the street styles of London. The black boots the Droogs wore were already known as ‘bovver boots’ worn by raffish gangs. Bowler hats were almost standard issue for City of London commuters in postwar London, but by the 1970s the bowler had a retro feel. A series of four images showing Malcolm McDowell, who played Alex, trying out other styles of hats is a real treat of the show.

Most of A Clockwork Orange was shot in London, notably in Thamesmead South housing estate, and within easy reach of Kubrick’s then-home in Elstree. In fact, despite having a pilot licence, Kubrick was afraid of flying and from the late 60s onwards filmed entirely in the UK, which put huge creative demands on his production designers and art directors. For his 1987 war film, Full Metal Jacket, Kubrick famously recreated the Vietnamese city of Hue in east London. Beckton Gas Works was about to be demolished to make way for the Docklands development. Kubrick brought in Royal College of Art architecture graduate Anton Furst to create a Vietnamese city set. Beckton was part-dynamited and then rebuilt to resemble a warzone complete with 200 real palm trees flown in from Spain, 100,000 plastic tropical plants from Hong Kong and accurate renditions of South Vietnamese pop advertising hoardings of the era.

For his final film, Eyes Wide Shut (1999), Kubrick recreated the streets of New York’s Greenwich Village using Commercial Road in east London. Kubrick tasked his brother-in-law Jan Harlan’s son Manuel to photograph the entire stretch of London’s Commercial Road (the full montage of images is on display) to find the right red door front where Tom Cruise’s character encounters a prostitute and is pulled inside. In the final cut of Eyes Wide Shut the shot of door number 265 lasts barely two seconds. Examples of the extraordinary lengths Kubrick went to, to realise his creative vision are myriad in this show and time and time again prove it’s not god, but Kubrick who is in the detail. They are well worth poring over.