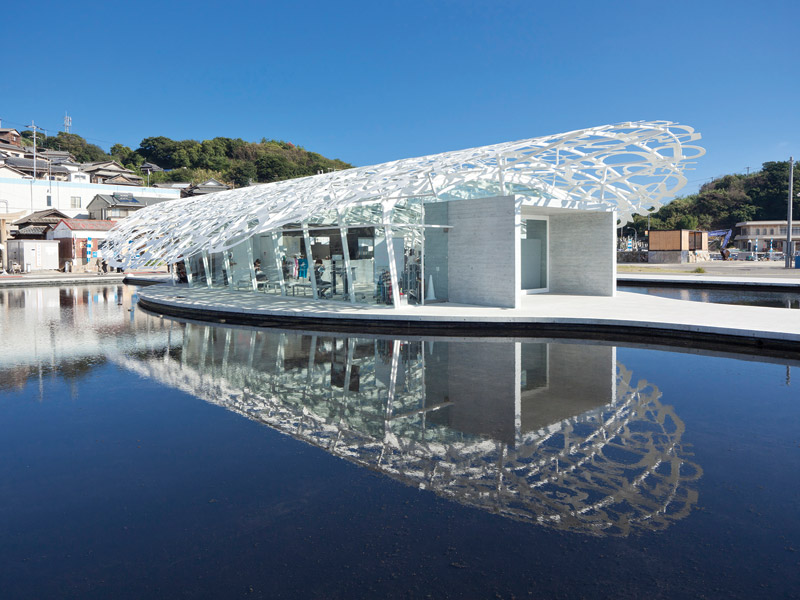 Dazzling white in the sun, shining silver by moonlight and draped in a dramatic fold over Japan’s Seto Inland Sea, what looks from a distance like a lacy iced tuile which might top an elaborate pastry, turns out to be the ferry terminal for the tiny southern Japanese island of Ogijima. Actually Ogijima’s Soul, as the building is titled by its creator Jaume Plensa, is an incredibly fancy sculpture of a building for an island of less than 200 inhabitants.

‘Build it and they will come’ was clearly the tenet when Plensa’s project was commissioned as one of the focal points for the first Setouchi Triennale in 2010, an event which seeks to regenerate through art a group of dying islands in this region of Japan. The strategy has worked, at least in Ogijima, whose handful of aged residents have been joined in recent years by young families repopulating the island, with a school, nursery, library-cafe and even a coffee roastery springing up to serve them. But art for art’s sake is reason enough to visit Ogijima, most picturesque of the art islands this year — which together are fielding 200 or so new exhibits by known and emerging artists. These new works sit against grand set pieces such as Plensa’s terminal, or Julian Opie’s cut-out figures for the port city of Takamatsu — permanent fixtures since the Triennale was established almost a decade ago. Roughly half of the artworks in each Triennale go on to become permanent installations across the islands.

Takamatsu, three hours by train from Osaka, is the principal embarkation point for this remote region also home to works by Hockney, Warhol and Giacometti, not to mention the five huge Monet water-lily canvasses which are the star turn of Tadao Ando’s Chichu Museum on the island of Naoshima. These masterpieces are viewable anytime, unlike the ephemeral works created on smaller islands for the Triennale, which can be seen for five and a half weeks this summer and again during Japan’s glorious maple leaf fall. Plensa is not the only western artist who has been at work on Ogijima, an island whose close-packed wooden houses climb steep hills, many of them artist takeovers opening to reveal both traditional and 21st-century treasures. The underwater world alive with octopuses, recreated in an old post office by Germany’s Sarah Westphal in her new video installation The Sea Within — The See Within, feels as modern as Goro Murayama’s installation Generative Wall Drawing for a Japanese Paper House seems ancient, speaking of slower times with deeply contemplative brushstrokes.

The joy of paint also sings out in Rikuji Makabe’s wallalley, commissioned for the 2013 Triennale but still enlivening Ogijima. In the work, vertical planks throughout the island have been randomly treated to contrasting coats of vivid colour, some adorned with delicate tree motifs which never let you forget you’re in Japan. But Ogijima’s most poignant artwork is a sculpture by Keisuke Yamaguchi on the opposite side of the island to the Plensa, and shining just as white and bright. It’s tempting to see Walking Ark (2013), a scaled version of the island itself apparently being carried on children’s legs, as a representation of the recent rebirth. Walking Ark (2013), a sculpture on Ogijima by Keisuke Yamaguchi

Between Ogijima and the mainland sits the small island of Megijima, where shop (rather than house) takeovers are a Triennale theme this year. Intriguing installations include Wedding Shop by Leong Ka Tai and the Red Thread, incorporating a loom and weaver, presumably of bridal wear, and Ping Pong Sea, where visitors can bat balls across nets inside an old seaside house. 20th Century Recall, created for a previous iteration of the Triennale by Chinese artist Hagetaka Funjo and now a fixture beside the port, is worth visiting for alone: a grand piano cast in bronze, apparently incorporating an oar, which seems ready to take to the sea on its flapping cloth sails.

Over on the sprawling island of Teshima, meanwhile, one finds the impressive Storm House by Canadian husband and wife team Janet Cardiff and George Bures Miller. Created in 2010 for the first Triennale, it is an immersive 10-minute, sensory adventure within a traditional Japanese house, which invites the viewer to experience the threat — and beauty — of monsoon-like rain, flashes of sheet lightning and crashing thunder sounds. Like so many works created for earlier iterations of the festival, it has lived on to delight this year’s visitors.

In some ways, despite having inspired the Triennale with the permanent Benesse Art Site museums bequeathed by a billionaire benefactor, the island of Naoshima seems at one remove from the festival and its more ephemeral offerings. However, Water — created this year by architect Hiroshi Sambuichi, who is passionate about both Naoshima and the relationship between buildings and nature — is a participation event open to all. Sambuichi has created, in the front yard of a traditional village house, a beautiful social space in which visitors can sit, chat and look out over the main street of Honmura port while dangling their feet in a shallow pool — a response to the lost wells which were the gathering places of old. Yet what Naoshima has gained in place of the ancient wells is priceless: world-class modern art housed in striking Tadao Ando buildings and the proof that cultural tourism can be a lifeline even for the most remote and depopulated places. To paraphrase Mr Michelin, not only worth a detour but a special trip to experience the joy of once-unimaginable regeneration as well as thrilling visuals.

This article was originally published in Blueprint issue 365. Buy a copy here, or subscribe to Blueprint