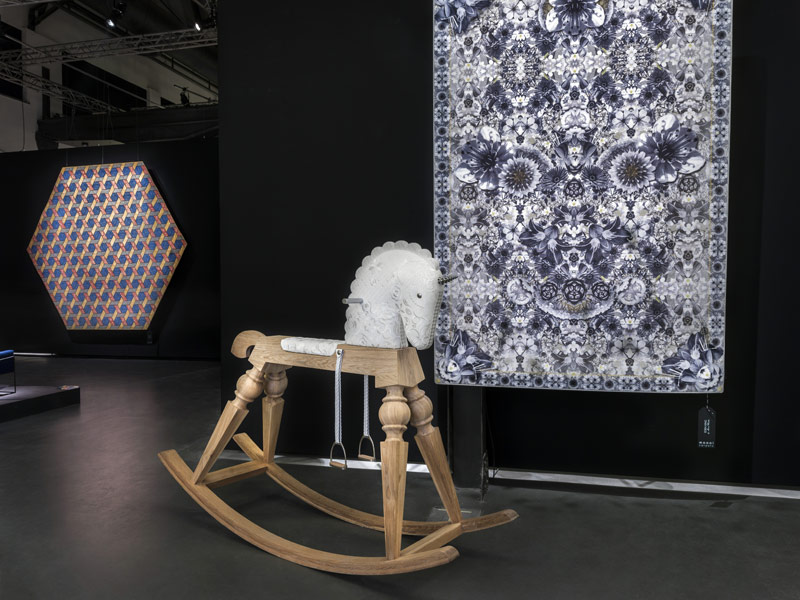 Johnny Tucker was in Milan for Design Week and its lighting component, Euroluce, and serves up his pick of this year’s crop.

Perhaps it was the biennial presence of Euroluce, the lighting show, at the Fiera this year, but it felt as though there was a real buzz to the showground. Unusually, it felt stronger than what was going on around the show in the city itself.

Moroso, Teo by Arelier Oi. The French consultancy took its inspiration from bridges for this stand-out sofa system Cappellini, Anemos by Antonio Facco. Assuredly simple and muscular table and chairs from a new face

The Tortona area, in particular -- with a couple of exceptions -- felt particularly flat. Alessi, Egg Cup and Spoon by Marcel Wanders. The cup is OK but the spoon with weighted hammer is genius USM Rethink the Modular exhibition, Karlsruhe College of Arts and Design/BLESS. Forget using just your thumbs: typing with this machine was way more physical and fun

During the week, for overall encompassing vision, Tom Dixon and Lee Bloom (who follow a similar model, in terms of manufacturing and selling their own products) were particularly strong, with Bloom launching more than 20 new pieces in a theatrical department-store environment complete with his own London cab and doorman. Moooi too, if you're a fan of its slightly dadaist output (which I am) put on a virtuoso show in Tortona (one of the exceptions) and, in fact, Marcel Wanders' (Moooi founder) work for Hi-Macs was another of the area's highlights (not to forget his Alessi eggcup and spoon, complete with hammer...) Fritz Hansen, Sammen by Jaime Hayon. The Spanish designer continues to mine a rich vein for Fritz Hansen, now finding his own gaps in its collection for this dining chair Michele De Lucchi with Andrea Branzi set a brief for interior design students at the Design Faculty of Milan Polytechnic that was in many ways an antidote to the rampant manufacturing and marketing that is Milan Design Week these days. Knoll, Pilot by Barber & Osgerby, Front on, this surprisingly comfortable office/home crossover chair presents an uncompromisingly strong outline, and turns to pure finesse when viewed from the side. Lucchi and Branzi asked MA students to study the aesthetics of misery, resulting in beautiful if voyeuristic models of favellas and the like, all displayed in an exquisite palazzo. It had something of the Dario Fo twinkle about it. Clarks Rebooted by Kacper Hamilton. A reimagined desert boot with an associated artwork where Mass = Time (scales and sand), from the talented Hamilton Sodastream Mix by Yves Behar. You will be able to carbonate just about any liquid and share the result via social media

Elsewhere, Sodastream now has the technology in place to become huge. Initially coming back to take on the fizzy bottledwater market, the machine, designed by Yves Behar, now has way more fun about it. Available from early next year, Sodastream Mix will be able to carbonate anything from milk to cocktails. Fontana Arte, Yumi by Shigeru Ban. A precise and sculptural large light from the Japanese architect Flos, Ether by Philippe Starck. Starck has come up with the goods yet again

And it's the latter that is being maximised with a visual interface and app to upload fave cocktails to the machine and share successes with your cocktail community. It should open up a big new market for the company, as well as appealing to the cocktail professionals. Kappes, Continuum. Japanese Satelite star of last year does it again with a revolving wire in a captivating kinetic light (in Satelite)

We'll whip you up a Blueprint Special when it becomes available, but until then, here is our five-page pick of the week that was, with Euroluce on the fourth and fifth pages. Flos, Serena by Patricia Urquiola. The naissance of a new range from Urquiola Euroluce at Salone 2015
It was the biennial Euroluce year at Salone and a strong one at that. Artemide (and its company Danese), Foscarini and Flos were the real standouts. Foscarini, Caiigo by Marco Zito. This mimics the mist rising from the water in Venice and is truly beautiful in the flesh

At the end of last year, the family-run business of Flos was sold to a private equity firm, and architect Patricia Urquiola believes that has led to a lightness of touch from CEO Piero Gandini for Euroluce this year: 'I know Piero well and I think the Flos ensemble is sophisticated. He is trying to be very light in a conceptual way at the moment. Foscarini, Kuraghe (Jellyfish) by Nichetto and Nendo. Unusually for Foscarini this delicate light is paper, not glass

From the beginning of the project, for my pieces, Serena, we wanted to have a strong range of materials from metal to wood to dichroic films. These are prototypes and we are going to play with them -- this is just the beginning. It's a system that's very easy to compose with and create a family.'