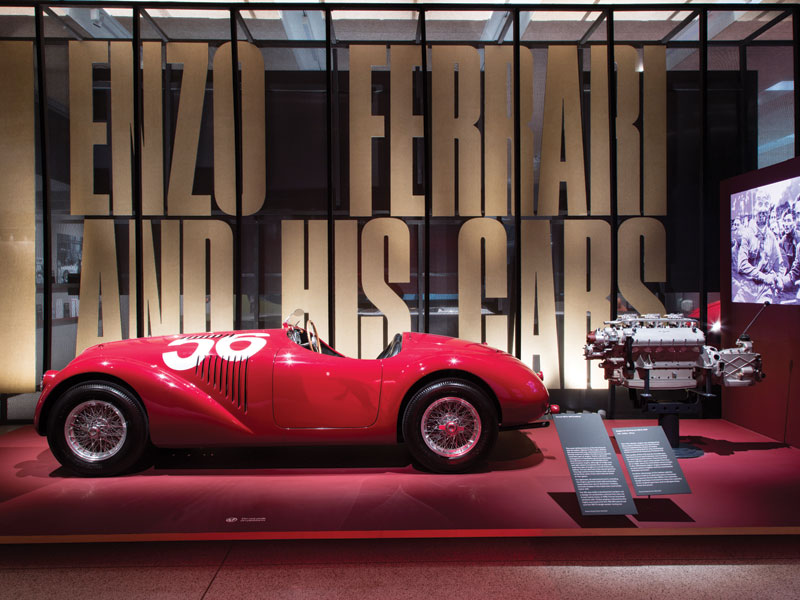 The Design Museum’s Ferrari show may be a collector’s fantasy, but it fails to get under Blueprint’s skin

In many ways a Ferrari is the apotheosis of design — an exquisitely engineered product that is ultimately fit for purpose, which is also aesthetically a joy to the eye and other senses.

These vehicles are objects of desire, creating need in people who didn’t even know they wanted a car (until they found they had a lot of money to burn). The world’s most expensive car sold at public auction is a Ferrari — a 1962 Ferrari 250 GTO Berlinetta (only 29 were ever built) — sold for $38m (yes, million) in 2014. Of the top 10 most expensive cars sold at auction, six are Ferraris.

So the telling of the story of how racing engineering and styling came together to create iconic products seems like the perfect exhibition for a design museum, right? Ferrari: Under the Skin aims to offer a ‘unique insight into the meticulous and glamorous world of Ferrari’, but I came out feeling I’d just bounced along the highly polished surface of a very slick show (designed by Patricia Urquiola with graphics from Pentagram) about a very slick product. Entertainment and eye candy, yes — insight, not really. The first Grand Prix win for Ferrari, the 1951 World Championship

All that said, if you like cars and in particular Ferraris, then go — you probably were planning to already. Ultimately, it’s a guy’s exhibition about very expensive boy toys (according to 2013 research, 92% of Ferraris are owned by men).

There are some £140m-worth of cars featured in the exhibition, most of which were sourced from UK collectors. It all kicks off with a replica of the first chunky Ferrari 125 S, where form was still rather following function, way before the later relationship with legendary Italian car styling companies Pininfarina and Bertone.

Room Two tries to bring the human element to the show, concentrating on Enzo Ferrari himself, the founder of the company, who began as a racing driver and lived for racing: ‘Racing is a great mania to which one must sacrifice everything, without reticence, without hesitation,’ he once said. The street cars started off as Enzo Ferrari’s way of pumping more money into his beloved racing team — Scuderia Ferrari. The racing pedigree of this company is simply unparalleled at the very highest level. Ferrari is the only company to have competed in every single year of the Formula One World Championship, since its inception in 1950. Enzo Ferrari at the 1920 Targa Florio in an Alfa Romeo 40-60 HP Racing Type. He raced for Alfa before setting up his own marque

The first Ferrari car came off the production line in 1949 from the Maranello factory of Dino Ferrari, Enzo’s father, which as a machine tool factory during the Second World War came in for a little attention from Allied bombers.

This second room of documents, personal objects and pictures is interesting, if lacking in detail — particularly biographical — especially if you can’t read Italian. I would have also added extra, more difficult, information at certain points: to the caption of a picture of Enzo Ferrari taken with the charismatic Canadian driver Gilles Villeneuve in 1977, why not mention that the driver would go on to lose his life in a Ferrari five years later while qualifying for the Belgian Grand Prix? It all feels a little pristine and promotional.

Room Three is models and drawings, all fascinating, showing the design process. The naivety of the early technical drawings is particularly endearing. Wire, wood and clay models feature, with engines split asunder, Hirst-like, for us to marvel at. This is also the room where the hallowed name of Pininfarina gets a mention. Ferrari is about performance and it brings in the stylist to add the skin-deep beauty. ‘I am not the designer. The technical drawing for the first Ferrari, the 125 S

Other people do that,’ said Ferrari, adding, ‘I am an agitator of men,’ alluding to his legendary prickly personality.

This car design room, followed by one that focuses on the celebrities who have owned Ferraris, ho hum.

Although there is one interesting fact here: the famous rearing horse marque was inspired by the emblem on the side of the biplane of First World War fighter ace Count Francesco Baracca.

Moving swiftly on, we hit racing big time, with cars from the 1952 Ferrari 500 to a 2000 F1 model. Interestingly this room actually smells of cars — leading you to question other sensory input: why the ambient music soundtrack in the later rooms and not the screaming, ear-splitting and ultimately exhilarating sound of the racing engine whining and backfiring in all its fastest-car-alive glory? If you’re a lover of cars and Ferrari, you’ll love this show. It certainly loves Ferrari, to the point where it feels like a sponsored event, rather than one of design discourse. This is of the ilk of a summer blockbuster movie — an entertaining visual feast, if not particularly challenging. The difference is that the audience is going to be mostly middle-aged blokes, passive-aggressively one-upping each other with Ferrari facts, like the two standing next to me during the launch. The last exhibit of the show is a LaFerrari Aperta owned by Gordon Ramsay. The gainsaying discussion of the two next to me ended with, ‘I think Gordon Ramsay’s food is overpriced anyway…’ Have you see the price tags on the effing motors mate? Under the Skin? Barely a scratch.