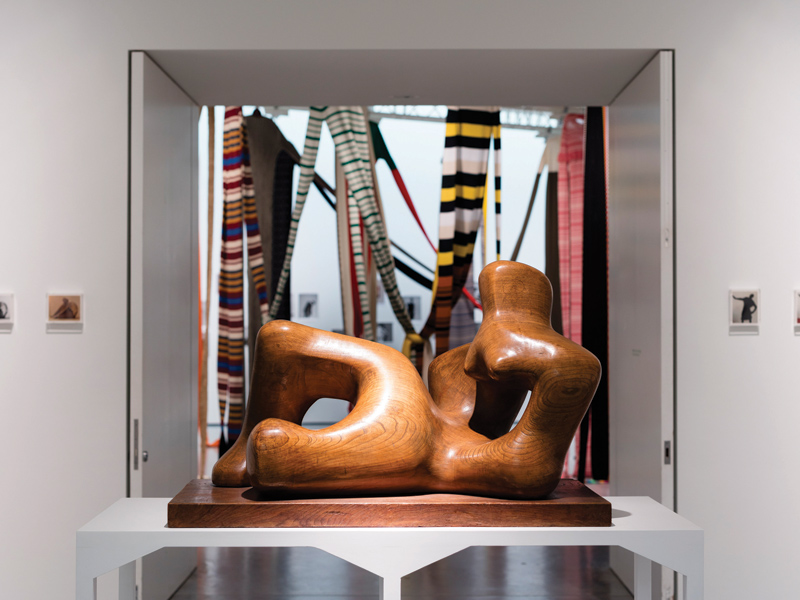 Fashion designer JW Anderson has curated an exhibition exploring how art, fashion and design has reimagined the human form in the past century at The Hepworth Wakefield

The Hepworth Wakefield, Wakefield
Until 18 June

The worlds of fashion and art collide with two exhibitions this year dedicated to the ways in which both disciplines have represented the human body in radical new forms. First, Burberry presented a collection inspired by Henry Moore’s work and creative process, along with some 40 of his sculptures, to the public at the second outing of its Makers House exhibition in London’s Soho in February.

Now The Hepworth Wakefield, the largest purpose-built exhibition space outside London, is enticing visitors with the lure of one of fashion’s biggest names of the moment. Both shows set out to portray the work of these two giants of British sculpture in a different light and attract a new, younger audience to discover them afresh.

Looking for new ways to tell the stories of its vast collection, The Hepworth Wakefield gave forward-thinking, Northern Ireland-born fashion designer JW Anderson free rein to delve into its archive of more than 5,000 objects and to respond through his own creative lens. The resulting exhibition is the first in a new series of shows for the gallery, curated by figures from creative fields outside the art world — from fashion but also music, film and literature.

It spans a century of reimagining the human form, with more than 100 works taken from both the Hepworth collection as well as Anderson’s own extensive archive and private collections, drawing parallels between clothing, furniture design, ceramics and sculpture. But it isn’t any ordinary, chronological exhibition. The usual information displays have been stripped back to allow visitors to make their own personal interpretation of the connections between them. Objects are grouped in a series of unexpected pairings that often seem to mirror each other’s form — a couture dress from 1955 is draped over an Eileen Grey Transat chair; Comme des Garçons’ padded bodices stand next to Sarah Lucas’ sexually charged ‘bunny’ works; a bright red Gerrit Rietveld Zig Zag chair sits adjacent to an abstract kneeling figure by sculptor FE McWilliam. Says Anderson: ‘This is not an education in fashion or sculpture; for me it is about emotion and being confronted by two things. It’s putting a whole load of things in a room that don’t technically work together but in that moment they do.’

Anderson’s starting point was the early, loosely figurative sculptures of Hepworth and Moore from the Twenties and Thirties, which simplified and abstracted body parts, carving holes right through them and moulding undulating lumps and bumps to draw analogies between the human figure 1 and landscape. ‘How rebellious that must have been and how unusual to the eye in that period,’ says Anderson of what he terms ‘disobedient bodies’. The exhibition rooms are divided by curtains

The exhibition opens with Moore’s rich, wooden Reclining Figure (1936) in a state of repose, its jaunty angles reflecting the exaggerated form of Jean Paul Gaultier’s Cone dress (1983/4), laid horizontally on a white table in the next room. Both are about inventing a completely new form, one with projecting limbs and hollows, the other with padded cone breasts.

The exhibition unfolds in this vein, set across a series of small rooms that have been draped and clothed in JW Anderson fabric by exhibition designer 6a architects. Curtains soften the sharp edges of David Chipperfield’s gallery spaces to give the illusion that these closely gathered bodies are in dialogue with one another, like ‘an intimate social gathering in someone’s home’, says 6a. JW Anderson has created an installation of oversized jumpers

Anderson’s own work for his label plays with ideas of gender and identity with unisex designs, ranging from frilly, ruffled shorts for his menswear collection (A/W 2013/14) to sheer floral shirts (S/S 2013).

One room cleverly hangs a concertina-pleated Issey Miyake dress (S/S 1994) with an Isamu Noguchi Akari light sculpture (1954) in such a way that it blurs the lines between what is wearable and what is not. In fact, there are very few busts or typical exhibition mannequins in the show — everything is treated as a work of art. In one room, gingham 3D tops and skirts (S/S 1997) by Comme des Garçons have been stuffed with padding and arranged on the floor like a contemporary art installation. Says Anderson: ‘I wanted to screw with the idea of fashion, sculpture and art.’

At the centre of the exhibition space is a room of stretched, elongated jumpers, forming a forest that visitors can climb into and wear. Before concerns over conservation, Hepworth originally envisioned touch as an integral part of the experience of her sculptures. As a nod to this Anderson presents a series of photographs by fashion photographer Jamie Hawkesworth of 120 local school children wearing the exhibition’s couture clothes. ‘It’s this idea that garments fundamentally come to life by you interacting with them,’ says Anderson.

‘Fashion should be cultural. It shouldn’t be about luxury but about collaborating with different people in different art forms and being able to try to democratise everything.’