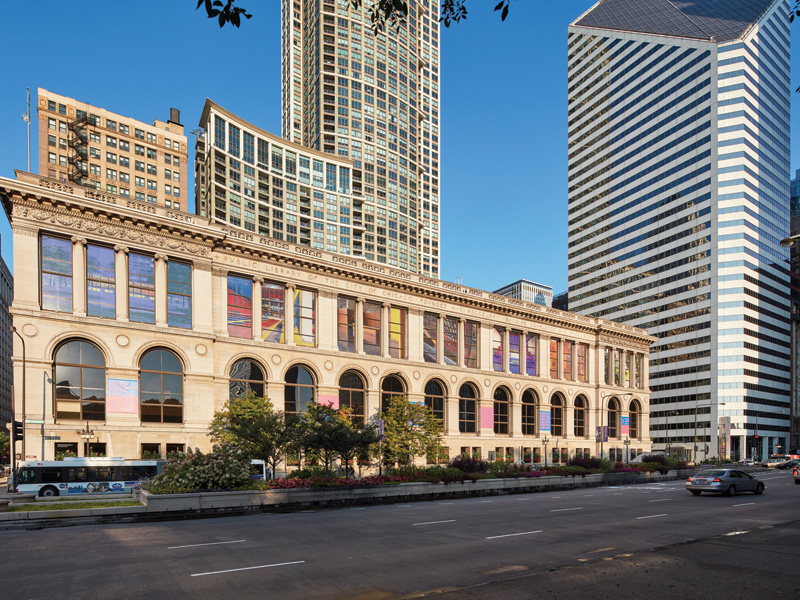 Chicago Cultural Center and other venues
Until 7 January

The skyscraper was born in Chicago, and there’s 132 years of skyscraper history written into the urban fabric. So perhaps it’s no surprise that in the second Chicago Architecture Biennial (CAB), it’s a bunch of skyscrapers that literally rose to the implicit challenge of its title, Make New History. These towers are just 1:24 scale models though, clustered inside a grand room in what is again CAB’s main venue, the downtown Chicago Cultural Center. We shall return to it and all its offerings, but first, what does ‘Make New History’ mean exactly?

The curators, LA-based architects Mark Lee and Sharon Johnston, spelled it out for Blueprint. ‘“Making” is an active production,’ said Lee, ‘while “New” is the opposite of looking backward.’ As for ‘History’, Johnston describes it as ‘an active set of ideas… a horizon of information’. Lee notes how the current generation taps into it: ‘There’s a yearning for meaning.’ The title is borrowed from Ed Ruscha’s 2009 book, which has 600 blank pages. But as we shall see, CAB’s new histories are not created on a tabula rasa — ‘New’ can and does look backward. More significantly, this ‘History’ is strangely apolitical. CAB runs until January but some of it is already history, such as its early performances. Jeanne Gang, one of America’s greatest living architects, was responsible for the bizarre costumes that transformed dancers into living Technicolor mops for the opening showcase performance of Nick Cave’s jazzy Here Hear Chicago, out on Navy Pier, and Gang was even in the team that dressed the dancers on stage. It was an exuberant, bonkers performance, pulled off brilliantly. Rather than any history angle, she seems to have taken CAB 2015’s message, titled The State of the Art of Architecture, that architects should think beyond their practice.

Almost as mad were the costumes in a more tranquil collaboration between artist Ana Prvacki and New York practice SO-IL, set in a 1908 conservatory at Garfield Park in Chicago’s West Side. A quartet performed the musical piece L’air pour l’air by Veronika Krausas from inside irregular white cocoon structures, with only their legs sticking out. It was enchanting. But was SO-IL’s architectural input in the engineering of the cocoon frames (not unlike paper lampshades), or in applying form to function (a brass instrument required a proboscis-like extension)? Despite the cocoons being habitable structures, SO-IL, like Gang, was straying far from normal architecture. Art and architecture came together in more conventional ways in two gallery projects that were associated with CAB, perhaps by pleasant coincidences of timing. In the South Side, the DuSable Museum of African-American History has reopened its Roundhouse, built in 1881 by Burnham and Root. As a CAB Partner Project, the Palais de Tokyo in Paris hosted the art show Singing Stones here for the first month. The show and the sunshine through coloured glass in the skylight breathed magic into the building. At the Museum of Contemporary Art, Lee and Johnston themselves redesigned key elements of the 1991 building (more modernist than postmodernist) by Josef Paul Kleihues. Now, it has a ground-floor destination restaurant (influenced surely by Tate Britain’s ground floor by Caruso St John), while the upstairs cafe (where Lee and Johnston had made a rather underwhelming intervention for CAB 2015) is now a bright Commons ‘engagement space’. Commissioned works by artists — Chris Ofili and Pedro y Juana — animate these respective spaces with bright, gentle power.

So far, it’s been more about art. Surely SOM, founded in Chicago, should restore the focus on architecture! But no, its own exhibition in Mana Contemporary, in the railway lands west of The Loop, is called Engineering x [Art + Architecture]. The global practice has worked with many artists in its 81-year history, including Picasso, whose 15m-high sculpture in downtown Daley Plaza it had to re-engineer in 1967. Recent collaborations are shown, but the stand-out display is about what SOM is known for: skyscrapers. Thirty 1:500 scale models (not all built projects) line up across a long room. Even though they are sequenced by height, not chronologically, this is the march of high-rise engineering history brilliantly represented.

Most of the projects by 140 international architects and artists are packed into the aforementioned Chicago Cultural Center, a neo-classical 1893 building. On the ground floor, Mexican practice Dellekamp Arquitectos’ big, simple platform The Wallderfull slopes up from the central space at an oblique angle. It’s irresistible to walk up, but if it’s a comment on Trump’s wall plans, it’s obtuse. In the surrounding galleries, I homed in straight away on Shanghai-based Archi-Union’s models and photos of buildings with beautiful curved surfaces and brickwork, because its notice said Robotic Craftsmanship. The looming issue of replacing humans is everywhere and warrants discussion elsewhere, but principal Philip Yuan did say this was about ‘a new collaboration’, and the robot-executed parametric design was, of course, about saving time. Robots are already making new history, yet they surfaced seldom in CAB. Another Chinese practice Urbanus showed its projects restoring a remote Taoist temple, and revitalising an ancient neighbourhood now subsumed into Shenzhen. They are about renewing history — and humanity. Further worthy works fill the ground floor, but with its claustrophobic low ceilings, the call of higher, airier floors grows. The level above brings us into some of the grand saloons with fancy marble work, one of which hosts Horizontal City. Here, a field of models are laid out as if they were in Mies van der Rohe’s 1940 masterplan for the Illinois Institute of Technology, but each invites you to look into its interior, which may be domestic or communal. These are entertaining and often whimsical.

In the original vitrines around its edge, Marianne Muller displays blown-up photos of the Cultural Center’s architectural details — a very direct and subtle response to history. Over in the Chicago Rooms, where light floods in from over Lake Michigan, large works by architects look like artworks, as they did here in CAB 2015, almost dismissing architectural consideration for visual aesthetics.

By contrast, two LA-based architects explore the possibilities of a basic architectural element: facade surface. In a corridor, Atelier Manferdini shows fine grid patterns ultimately inspired by Mies, while above a sloping cross-passage, Zago Architecture shows off huge, overlapping grid panels with a sort of digital sheen made by physically separating metallic layers of colour. Anything clad in that would dazzle! In yet another circulation space on that floor, a landing, lurks MAKE BIG PLANS by Rotterdam-based practice Monadnock.

These Dutch sure like Chicago visionary Daniel Burnham — the words are a quote from him, and the practice is named after an 1892 Burnham and Root skyscraper. Big red letters are mounted on one of those display trusses that used to stand on downtown American roofs. There’s barely room to stand back and read them. This is a Lee favourite — ‘I like the way it fills the whole space’ he says. ‘I hope it remains here.’ We reach the top floor at last, and a long, large salon packed with exhibits rising from the floor. At one end, Charles Waldheim’s field of small red Chicago tower models are arranged as different twins, distorted to maximise or minimise solar exposure.

At the other end, artist Iñigo Manglano-Ovalle superimposes an asteroid and a Brancusi sculpture replica on a grid of beehives. These are out-there conceptual ideas expressed arrestingly, but between them lies the most enticing of all CAB’s wonders — Vertical City, a forest of fifteen skyscraper concepts in 5m-high models (plus a dull one shorter just to be different).

First, some background on what this is all about. The 1922 competition to design a new tower HQ for the Chicago Tribune newspaper was a key event in architectural history — it pitted a who’s-who of avant-garde modernists against neo-classicists, such as winner Raymond Hood (in Manhattan, he would later brilliantly bridge into art deco then modernism). Adolf Loos expressed his Tribune tower in the form of a Doric column, subsequently making it a pin-up for postmodernism, and it’s the only original entry represented here. Barbas Lopes Arquitectos’ golden Tribune Tower is differentiated like a Doric column, unlike (behind, right) 6a architects’ pole

The others are by contemporary practices in a theoretical re-run of competition. Postmodernism is riffed upon in Sam Jacob’s Pasticcio, which stacks historic elements as sections in a ‘living corpse’ tower. 6a didn’t make a skyscraper at all, but made a pole of eighteenth-century wooden fixtures. Practices like Serie Architects and Tatania Bilbao Estudio made open towers of varying rectangular platforms. Totally unique and seductive was Francis Kéré’s cylindrical blue modules with organic apertures revealing Saarinesque white floorplates within.

My vote for the best, however, goes to Lisbon-based Barbas Lopes Arquitectos. Their classically modernist gold slab with sawtooth window bays is supremely elegant, differentiating like a classical column into perfectly proportioned base, shaft and capital, the last a Niemeyer-like slice of hemisphere!

What is the take-away from CAB 2017? It’s not like recent biennales and triennales which have deconstructed architecture or challenged its meaning and values — ‘we can’t be navel-gazing’, Lee remarked to Blueprint. Nor does CAB ask questions about the role architecture should play in a world with 99 problems, of which the Trump is one. Perhaps an opportunity was missed to react to his agenda. American architects have been vocal as Trump has trashed the EPA (Environmental Protection Agency) and the Paris Agreement and insisted on walling off Mexico — this is the new history out in the world. Architectural response is hard to find at CAB.

Instead, it’s as if Johnson and Lee have let architecture enjoy itself again. A play of architectural style has taken the stage, not just in re-running that 1922 competition in Vertical City (which was essentially a style war), but throughout CAB’s offering. Nor is there any new sensation about style itself (unlike, say, Philip Johnson’s legendary MoMA shows presenting modernism and deconstructivism), but rather a sense of continuum in architectural history. Chicago’s is woven by the likes of Burnham, Mies, SOM and Gang, so if it’s a case of ‘here is the new history, same as the old history’, CAB is ultimately about optimism.